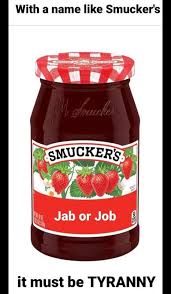 -Smuckers company was once known for their excellent treatment of employees, many felt part of the Smucker’s family.

-Smuckers instituted and moved ahead with a vaccine mandate, after courts have stayed the executive order from President Biden.

-Employees have had their exemptions approved or denied without a clear explanation as to why. Approved exemptions will be reviewed again in March of 2022.

I wanted to reach out regarding my story with Smuckers these past few months.

I worked at Smuckers for the past seven and a half years. I went on maternity leave at the end of May to have my first baby. At that point everyone was still working from home, but our return to in-office timeline continued to be pushed out due to the delta (variant). Getting vaccinated was highly recommended (not yet mandated).

I came back to work mid-October and on the date I returned back to work, Mark Smucker told the whole corporate company that getting the vaccine was going to be mandatory, and if you didn’t get it, then you would be terminated December 16, 2021 with no severance pay. However, you were allowed to submit a religious exemption or a medical exemption to a review committee by the beginning of November. (Way to come back to work after 4 months of having a baby. Talk about stressful).

Ever since mid-October it’s been stressful. Having to work full-time, be a full-time mom, and deal with deadlines, all while worrying about what the future holds for myself and my family.

Two weeks to turn in a religious exemption (which I completed). I was asked to speak with HR about additional questions via a Microsoft teams meeting (but they never let us know before-hand about the questions they would ask). They asked us about our previous medical history, and other invasive personal questions unrelated to work. After all that I submitted (on paper) and my answers given during the meeting with HR, they denied my exemption without an explanation as to why.

I have been emailing the HR director (the same woman I spoke with during the Microsoft Teams meeting). Then I went to her direct boss (senior VP) when she ignored my emails. From there I kept getting the run around, without a reason as to why I was being denied.

Some people are being allowed to stay, and work from home, with a re-evaluation in March. Others like myself, have been denied. The company is picking and choosing who they want to stay and let go. I assume this decision is due to the large number of people not vaccinated, and how it may hurt the company if they denied all exemptions. The company has taken a hard stance, stating employees without an approved exemption will now be terminated, unless they comply and get fully vaccinated. They aren’t allowing us to prove antibodies, wear masks when we have to be on campus, test weekly, work from home, or make accommodations for those of us with medical or religious exemptions.

I had asked my VP if he could write me a letter of recommendation, and he replied that he could only verify my dates of employment with the company. This same VP then went to my manager, who I also requested a letter of recommendation from, I was told that the VP had notified my manager that corporate was going to look into it. Yet, a friend in my same situation, works in a department with three people above her, telling her to use them as references if she needs a letter of recommendation. I also asked my boss if there was anyone like himself in upper management fighting for me to stay? We were already a small team to begin with, I’m not sure how they can afford to lose anyone else.  His response was that they must follow company policies. Whatever these company policies are, they are not being equally applied to employees. This vaccine mandate has opened the door to government sanctioned discrimination.

At this point, I have lost my battle. After nearly eight years in service to Smuckers, I was terminated without severance, and worked my last day on Dec 15, 2021.

Thank you for your time and reading my story!” – Miranda

Spread the love
more
Spread the love
more
Previous StoryBOYCOTT:[JP Smuckers Co] Testimony From Smucker’s Employees
Next Story[Op-Ed] The title of the news piece was “What’s the timeline for kids under 5 to get a COVID vaccine?” NO vaccine is needed in children, NONE!!! Those doing this must be held accountable when a child dies!
--