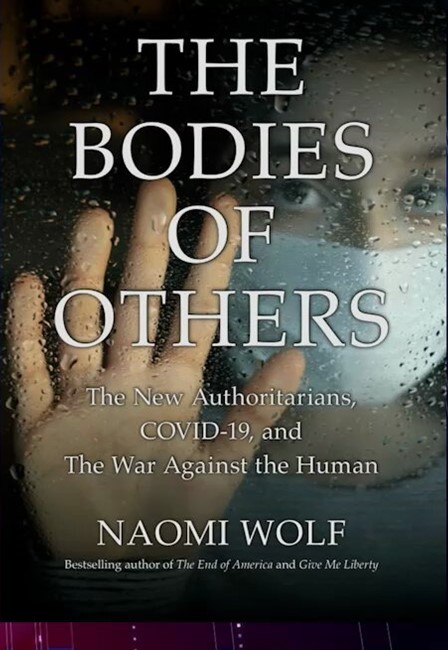 Okay, we try to provide a platform here at War Room for people that come with facts, evidence, data, science, no matter what the apparatus says in the search for truth. We’re very proud to put on people like James O’Keefe and our next guest, Naomi Wolf.  Naomi I’m not kidding, the movie, ‘The Lives of Others’ was about the Stasi and how they’ve infiltrated the family units in East Germany and really broke German Society. Your book, new book, ‘The Body of Others,’ and I know there’s a play there but I’m not kidding it’s, you’re the type of person that’s out there, relentlessly drilling down that the apparatus,  man you’re after big Pharma and quite frankly you warned us all this was going to happen, what a year, a year and a half ago, when you started coming on the show, that this type of surveillance and these types of that they would play smash mouth and heart ball.  So, I know you’re all over the Pfizer thing

You’ve also, I mean talk about edgy tonight, you’ve got the other webinar want to give details to everybody who watches this show should go to this webinar tonight, totally free, watch it, it’s about you taking action into your owns hands and filing criminal charges. You’ve already done the thing as civil charges, everybody in the audience should see that. I know from the feedback I’m getting from the War Room Posse that are participating in this War Room Daily Clout Pfizer investigation, people couldn’t be more excited about they just feel like they’re really you know adding value and doing something for their, kids, their family, the community the country. So, Dr. Wolf, take it away.

Like Mr. O’Keefe was saying, I realized when I was listening to him that he’s really pioneered this model of crowdsourcing knowledge and investigations. And, you know, this incredible War Room Posse now taking on the Pfizer documents, 55,000 court ordered released documents. It’s a similar kind of model definitely inspired by what he did. And it is that every day that I see what they are doing I feel more inspired and humbled.  It is a transformational model and it’s proving out so, I just want to update people a little bit and then I want to read a moving note from one of the volunteers.

Every day new facts surface. So, I just want people to be patient and understand that there are two tracks. In two weeks, I will present a summary interim report and press release about the findings for the media, for followers, for the community, that have come up. However, that is not the same track, which the lawyers reminded me last night is a longer track of the attorneys, these 250 attorneys deliberating and creating subcommittees and making decisions themselves and asking for follow up documents from the volunteers.

That’s going to be a longer process and it’s also a confidential process, right?  Because we don’t want to lead or they don’t want to let the other side’s lawyers, you know, know what kinds of approaches they’re taking and what they’re investigating. So, I will release an update in two weeks and then a month of will press release press conference, but the lawyers are going to take longer to deliberate investigate because the legal process takes longer. So, I just wanted to update everyone. And in the meantime, may I read this incredibly moving note that one of the volunteers wrote here?

So, I’m not going to share his name because I haven’t cleared that with him yet but he said, I got involved because of War Room. My brother was pretty much forced by his employer to get the Pfizer vaccine. After the second dose his body developed a rash all over that covered most of it. He had blisters that were really big and filled up with fluid puss was coming out of his fingernails. He went to the doctors.  They put him on Prednisone etcetera, naturopathic doctor is trying ozone therapy, irradiating his blood, 10 treatments. His veins were collapsed so it’s hard to get the first treatment. He has suffered so much for about two months now and then it goes on about how they had to send his blood tissue to a national lab in Utah because his case is so rare.

And he said I can go on and on about those who are gone now, who got the vaccine and then got covid and died. And then he concludes, these documents are really revealing. I can see why Pfizer wanted to keep them under seal for 75 years. Pfizer and this is a headline, right, Pfizer was required to report all adverse events and deaths to VAERS the government accounting database within 15 days of receipt. He’s checking if they complied, I don’t see that they complied. He mentions that his senators Thatcher and Linthicum have presented a grand jury investigation demand for all of this criminal activity and blatant disregard for human lives.

And I want to update here that a week after Senators Linthicum and Thatcher submitted their grand jury investigation demand it was accepted by the Ninth Circuit Court. You may notice that Rochelle Walensky of the CDC quietly corrected her website where they had over counted seventy-two thousand plus deaths as COVID, and she blamed it on a coding error. So, you guys are already having a massive impact.  She is a defendant as I mentioned and she’s behaving accordingly. She’s cleaning up her paper trail. He goes on, I’ve read quite a bit of these documents. They had seven deaths in December 2020 after the vaccine. So, really listen to that. It’s interesting to see that many were in senior care homes, right?

So, this is the kind of headline you didn’t hear that this volunteer has surfaced just by reading these documents. And then he said some people died within receiving within one or two days after receiving the dose. Then he concluded they shut down Jansen for just one death and many cases of deep vein thrombosis, but they had seven cases in Phase 1 and II Pfizer study and these deaths.

And then he said, and this is the headline again. I wonder why Pfizer was given FDA approval when there were over 400 deaths already in VAERS when the FDA was considering approving Comirnaty.  So, just to conclude by his close reading he’s identified huge headline: Number one are all the Adverse Events filed, reported, and in VAERS and the second thing he’s pointing out is a competitor vaccine which is not an mRNA vaccine, right? And which doesn’t have conflicts of interest with government agencies was shut down, Pfizer’s kept going in spite of deaths.

Dr. Wolf real quickly tonight your webinar, I want to make sure everybody in the War Room Posse knows how to go there and quite frankly, I want them to also understand how they can download or watch your first webinar on filing civil suits, but tonight it’s criminal and when Naomi Wolf goes and does something it’s by the way, on a scale from one to ten on the Pfizer and I don’t need you to give any details, but actionable items, one being none and 10 being so many that were it’s going to take us a while and guys are going to end up in jail. Actional items coming off  of what you’ve seen to date in the 55,000 pages that the War Room Posse is assisting your great team with, where do you think we stand right now?

So, you know, again I can summarize some of the crimes that surfaced in the lawyers’ meeting without giving details and I really want to credit, It’s not me. This is being driven by Craig Klein. Mike Cereo (sp?), these 1500 volunteers, these lawyers. I’m just facilitating and supporting.  Really, they’re facilitating and supporting this and I’m just cheering them on. But what some of the crimes that surfaced were racketeering Rico, denial of civil rights, medical malpractice, device malpractice, and denial of informed consent. But the thing that came up over and over was fraud and this goes to you know, conversations you’ve had here with Edward Dowd who’s also saying if fraud can be proven against Pfizer it breaks up their immunity from or their immunity from prosecution civilly and possibly criminally. I’m, again not a lawyer but fraud is..

So, it is too early to say the lawyers were very clear that I need to make that clear. Their lawyer time takes longer, but there was affirmative discussion that I can’t kind of disclose that series, you know, serious things happen here with legal repercussions and they are all over it so let’s put it that way.

Okay, by the way, I want to compliment the 1,500 War Room Posse there put the shoulder to the wheel getting tremendous feedback.  A couple weeks you’ll have an interim report and maybe a press conference and then you’re going have a final report sometime four -six weeks after that?

Correct and the lawyers’ actions and benchmarks may likely take longer, but I’ll continue to update with the lawyers’ consent when there are legal benchmarks, filings strategies, that they want to disclose but I really want.

It’s a really interesting question. It would make great television, but I would definitely need to get green light from the lawyers. I don’t want to mess up with their doings with my journalistic excitement.

Perfect. Okay tonight. How do people get to your webinar?

Excellent. So again, these webinars are Craig Klein’s, idea, execution. You can look at the last one, which had huge impact where James Ostrovsky talked about, you know, how to file civil charges. And tonight, at last James Ostrowski’s coming back at 7 p.m. It’s right on the homepage webinar file, criminal charges against school officials and others is not just school officials. You can use these skills to file criminal charges against any public official, who’s broken the law.

And many laws have been broken in this pandemic and it’s 7 p.m. tonight on Daily Clout. You can register right there. You’ll get a link and we will have the template. Again, posted will share it with your wonderful team to post and socials so you can all take this template. Take these guidelines and file criminal charges. And honestly, this is an army and see it having such an impact as people are in a defensive positions too early to say we won. But it’s so powerful to have all of you empowered with your great skills, your great passion, and intelligence whoever you are out there. You’re filing criminal charges, your filing civil charges, or you will be filing criminal charges after tonight and it’s making a difference.

Okay, I want everyone to jump all over that, it’s free. Just go to the Daily Clout, real quickly how do people follow you?

Dr. Naomi R Wolf on GETTR and come to Daily Clout dot io and please donate and support us, continue to because we have had to hire more staff.  So, we could really use your help to keep doing this well, thank you so much. And there’s my book. 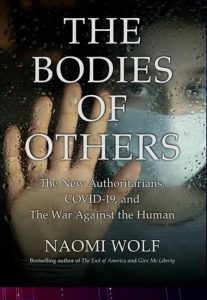