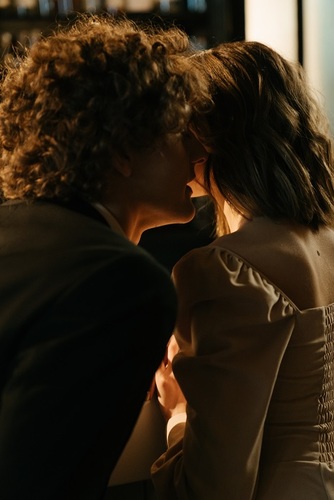 Ask any single woman about the ease of dating in today’s world and they will most certainly roll their eyes and groan. As a single woman myself, I can vouch for how tough the dating climate is for every one of us. But unvaccinated, single women now have it that much harder. The reason? The decision as to whether or not they will date vaccinated men is now on the table. And I can tell you first-hand, which has nothing to do with the viability of the candidates, themselves, as rich and interesting prospects, but rather “sex” to put it bluntly.

The overriding concern that the harmful effects of this vaccine may, ultimately, enter these women once the raincoat comes off.

As these women chose to remain unvaccinated for a reason, mitigating any risk by eliminating candidates based upon vaccine-status has become their new norm. Doing so isn’t without its issues, admittedly. Qualifying single men by such a standard makes the pool in which to select from additionally small, especially if one is living in a blue state. On top of that, plenty of single men don’t shine to the notion that they aren’t being considered simply because they decided to get vaccinated. Among the most disgruntled, hostile men tend to be those who succumbed to the vaccine by force. Feeling penalized twice over for a vaccine they never wanted to begin with, many of these men don’t handle these women’s rejection well.

Guilt, annoyance, diminishment, and just plain rudeness are known to occur in relation to these women’s decision to stay committed to their particular stance. “I have been called names for stating that the vaccine is a dealbreaker for me,” said Anika Janis.

For these women, there is simply not enough information about the vaccine or its effects to warrant consideration. No one knows the ramifications or what is to come for those who took the vaccine.

Where men might take being vetoed personally, women don’t see it that way. Women see it as an act of self-preservation and safety in the face of reality, given the nature of a large portion of men presently. Most will not want to keep that raincoat on for longer than absolutely necessary. With this in mind, until much, much more is uncovered about how this vaccine impacts lives, the decision ‘not to date’ vaccinated men remains steadfast for numerous unvaccinated women.

Although some may see these women’s extreme caution as being foolish, others point to the “intense criticism experienced, extreme pressure imposed by vaccine mandates, and the physical anomalies shared by outspoken vaccinated — people no longer the picture of health after receiving the vaccine” to validate their decision. For these women, science ‘speaking to the efficacy of the Covid-19 vaccines’ does little to remove the fear associated with what they are observing all around them simply because “no one knows who to trust anymore” in their opinion. That, in itself, is the only consistent truth these women feel that they can count on.

And if you think they are alone in this assertion, think again. Plenty of unvaccinated parents agree and are cautioning their teenage and adult children to adopt that same form of thinking when it comes to dating. Single, unvaccinated men are also following suit and running into the same issues as their single, unvaccinated, female counterparts. Calling themselves “Purebloods,” they too are only looking for unvaccinated partners to date. And even unvaccinated, married women have taken a stand with regards to their husbands’ decisions to take the vaccine or not. Several have noted to me that “divorce has been become an option” if their husbands buckled to the pressure of being vaccinated. All in all, the dilemma is resonating strongly across the unvaccinated board, beginning with single women.

Spread the love
This DailyClout article is the writer’s opinion.
One of our country’s most important freedoms is that of free speech.
Agree with this essay? Disagree? Join the debate by writing to DailyClout HERE.
Spread the love
Previous StoryPoll: Nearly 80% of Voters Oppose Transgender Procedures on Minors
Next StoryLarge demonstration held in Paris against the rising cost of living