Study Confirms that Molnupiravir Creates COVID “Variant Soup”. How could the FDA Approve It? 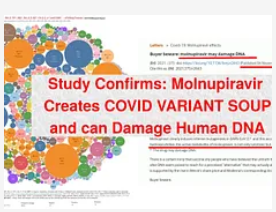 A couple of weeks ago, I made a post that alleged that Molnupiravir, a mutagenic drug that makes the RNA of Sars-Cov-2 mutate, causes new COVID variants to appear faster than before.

A pre-print for a new scientific study was just published that confirms this contention.

The problem is that SOME mutated copies remain viable – and create new variants!

The study took nine immunocompromised patients, gave Molnupiravir to five, and used four as controls. Within days, the five treated patients developed numerous mutations in the viruses that infected them:

Here, we used a case-control approach to monitor SARS-CoV-2 18 genomes through time in nine immunocompromised -patients with five treated with 19 Molnupiravir. Within days of treatment, we detected a large number of low-frequency mutations in patients and that these new mutations could persist and, in some cases, were fixed in the virus population. All patients treated with the drug accrued new mutations in the spike protein of the virus, including non-synonymous mutations that altered the amino acid sequence. Our study demonstrates that this commonly used antiviral can ‘supercharge’ viral evolution in immunocompromised patients, potentially generating new variants and 25 prolonging the pandemic.

Note that the study used immunocompromised patients who cannot clear the virus easily. However, it is entirely possible that even immunocompetent people on Molnupiravir would acquire similar mutations. As we know that the boosted people are the slowest to clear Covid-19, they would be at special risk of developing and passing on new mutated copies of Sars-Cov-2.

Here’s the figure showing the Molnupiravir-treated patients created mutated strains of Sars-Cov-2, compared to the controls:

This confirms that Molnupiravir creates variants. Most mutations that happen are NOT helpful to the virus and reduce its “fitness.” Some, however, create new variants and contribute to the crazy “variant soup” we are seeing.

Now, William Haseltine, a virologist formerly at Harvard University known for his work on HIV and the human genome project, suggests that by inducing viral mutations, molnupiravir could spur the rise of new viral variants more dangerous than today’s. “You are putting a drug into circulation that is a potent mutagen at a time when we are deeply concerned about new variants,” says Haseltine, who outlined his concern Monday in a Forbes blog post. “I can’t imagine doing anything more dangerous.”

Concerns about the mutagenicity of Molnupiravir in humans are not new. Here’s a letter to the BMJ warning about it:

Last summer, when an associate of mine had Covid, a doctor proposed that I give them Molnupiravir. I am so glad that I declined and gave them Ivermectin instead. (Covid went away in 1-2 days)

All these concerns were outlined a year ago. They are now being confirmed.

Even worse, they were raised at the FDA advisers meeting.

The expert panel voted 13-10 that the pill, called molnupiravir, should be authorized, although members expressed concerns that, if used in pregnancy it could cause birth defects. During the panel, discussions frequently turned to whether or not panelists trusted the effectiveness data on the drug, even when they were discussing other topics.

Panelists also worried about data showing that use of molnupiravir might, in theory, lead to new variants of the SARS-CoV-2 virus through its mechanism, which works by causing viruses to make mistakes in copying their genetic material.

One of the FDA’s so-called “experts” explains his YES vote:

“This was clearly a difficult decision,” said Michael Green, an infectious disease expert at the University of Pittsburgh, in explaining his “yes” vote.

I am sorry, Dr. Green, but it was not a difficult decision — you should have voted NO.

How could the FDA approve Molnupiravir, given that they knew all about the potential for deadly consequences?

Spread the love
Spread the love
Previous StoryCanadian Crackdown & the War Against Dissent During COVID-19
Next StoryTop Insurance Analyst: High-Vax Regions Show a 15% Higher Mortality Rate in 2022 Than in 2021