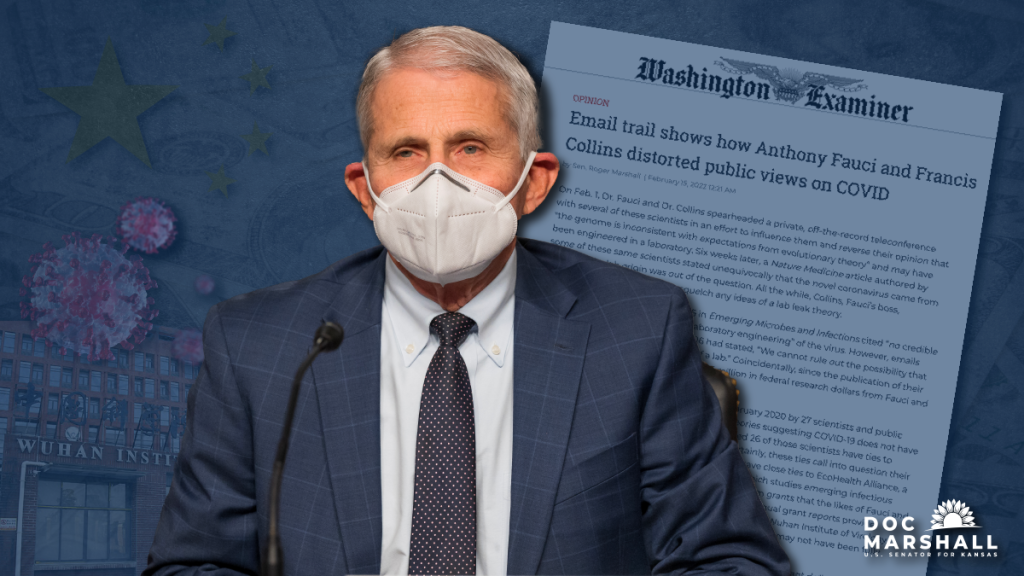 (Washington, D.C., February 15, 2022) – U.S. Senator Roger Marshall, M.D. penned an op-ed for the Washington Examiner about the nearly ten billion dollars in funding controlled by Dr. Anthony Fauci and Dr. Francis Collins and how those dollars appear to have influenced scientists worldwide on their opinion of COVID origins. In the op-ed Senator Marshall said in part,

“…failing to carry the water of Dr. Collins and Dr. Fauci certainly could have resulted in new grants being reduced or even pulled back. Thus the issue of a conflict of interest surely remains… When billions of taxpayer dollars remain in the brain trust of a few powerful bureaucrats for decades, conflicts of interest — both conscious and subconscious — can arise and cloud the vision, decisions, and scientific assessments of nearly anyone. Human nature dictates as much. Scientists have now gone on the record recounting concerns about backlash if they did not toe the line.”

You may click HERE or scroll below to read the op-ed in its entirety.

In January 2020, the scientific world was startled with the breaking news of a novel coronavirus. Thanks to a brave Chinese scientist, the DNA sequence of this virus was released to the world.

Upon reviewing this genome, several of the world’s top virology experts sent emails to Dr. Anthony Fauci, head of the National Institute of Allergy and Infectious Diseases, and Dr. Francis Collins, director of the National Institutes of Health. These emails suggest that scientific leaders believed the virus possessed features that looked engineered — several even believing there was a more than a 50% chance it had originated in a laboratory.

Then something astonishing happened. Over the next two months, many of these same scientists, federal grantees, completely reversed their opinion and stated in three separate scientific journal articles that the lab origin theory was impossible.

So, what changed their minds?

On Feb. 1, Dr. Fauci and Dr. Collins spearheaded a private, off-the-record teleconference with several of these scientists in an effort to influence them and reverse their opinion that “the genome is inconsistent with expectations from evolutionary theory” and may have been engineered in a laboratory. Six weeks later, a Nature Medicine article authored by some of these same scientists stated unequivocally that the novel coronavirus came from nature and a lab origin was out of the question. All the while, Collins, Fauci’s boss, encouraged Fauci in emails to squelch any ideas of a lab leak theory.

Another letter published on Feb. 26 in Emerging Microbes and Infections cited “no credible evidence supporting claims of the laboratory engineering” of the virus. However, emails between two of the authors on Feb. 16 had stated, “We cannot rule out the possibility that it comes from a bat virus leaked out of a lab.” Coincidentally, since the publication of their article, the authors have received over $15 million in federal research dollars from Fauci and Collins.

A third letter, published in The Lancet in late February 2020 by 27 scientists and public health professionals, condemned “conspiracy theories suggesting COVID-19 does not have a natural origin.” Sure enough, reports later showed 26 of those scientists have ties to researchers at the Wuhan Institute of Virology. Certainly, these ties call into question their impartiality. Ten of the authors of the Lancet letter have close ties to EcoHealth Alliance, a U.S. nonprofit group spearheaded by Peter Daszak, which studies emerging infectious diseases utilizing taxpayer funds. The money comes from grants that the likes of Fauci and Collins provide, as well as the Department of Defense. Annual grant reports provide evidence that EcoHealth Alliance and its sub-awardee, the Wuhan Institute of Virology, were engaged in gain-of-function research, of which the NIH may not have been fully aware.

Recently, EcoHealth Alliance has come under scrutiny for using grant dollars to fund experiments that may have violated former President Barack Obama’s moratorium on this risky research at labs in Wuhan, China. Despite this, EcoHealth has a long-standing relationship with NIH and the DOD. In fact, it has received over $54 million in funding from these agencies since 2008, including a $7.5 million grant in 2020.

Not long ago, the national media ridiculed and dismissed anyone who suggested a lab origin or leak of the virus that causes COVID-19. Additionally, after the Emerging Microbes and Infections article was published, Collins penned a revealing email to Fauci stating, “Wondering if there is something NIH can do to help put down this very destructive conspiracy, with what seems to be growing momentum. I hoped the Nature Medicine article on the genomic sequence of SARS-CoV-2 would settle this. But probably didn’t get much visibility. Anything more we can do? Ask the National Academy to weigh in?”

This email invites several questions. For one, were Collins and Fauci involved in the writing of this Nature Medicine article? And then why were the government’s top health officials so desperate to influence the media narrative surrounding the origin of COVID-19?

As you ponder these questions, keep in mind that the authors of the articles mentioned above and their organizations have received over $500 million dollars in new funding from the NIH, NIAID, and the DOD between 2020 and today. Additionally, in 2020 and 2021, the authors also received more than $2.2 billion in funding that had been obligated to them before the pandemic. Over the preceding decade, these authors had received nearly ten billion dollars in federal grants.

Yes, the majority of the dollars were predetermined before the pandemic. However, a failure to carry water for Collins and Fauci certainly could have resulted in new grants being reduced or even pulled back. One need not believe there is an actual quid-pro-quo here to recognize that a conflict of interest arises.

When billions of taxpayer dollars remain in the brain trust of a few powerful bureaucrats for decades, conflicts of interest — both conscious and subconscious — can arise and cloud the vision, decisions, and scientific assessments of nearly anyone. Human nature dictates as much. Scientists have now gone on the record recounting concerns about backlash if they did not toe the line.

Questions still remain as to whether this virus came from a lab. But the early dismissal of the theory of a laboratory leak complicated the investigation and will make us less prepared for future pandemics.

We know our research creates more questions than answers, which is why my colleagues and I introduced legislation for a nonpartisan, 9/11-style commission to determine the origins of COVID-19. Thankfully, listening to our call to Congress, the Senate HELP Committee’s latest bipartisan pandemic bill contains a modified version of our bill.

Spread the love
This DailyClout article is the writer’s opinion.
One of our country’s most important freedoms is that of free speech.
Agree with this essay? Disagree? Join the debate by writing to DailyClout HERE.
Spread the love
Previous StoryOver 98% of Eligible Americans Say NO THANKS to Updated C19 Boosters Three Weeks After Rollout [VIDEO]
Next StoryString Quartets Bring New England’s Seafaring History To Life