Fordham Mandated the Bivalent Booster. The Deadline is November 1st. 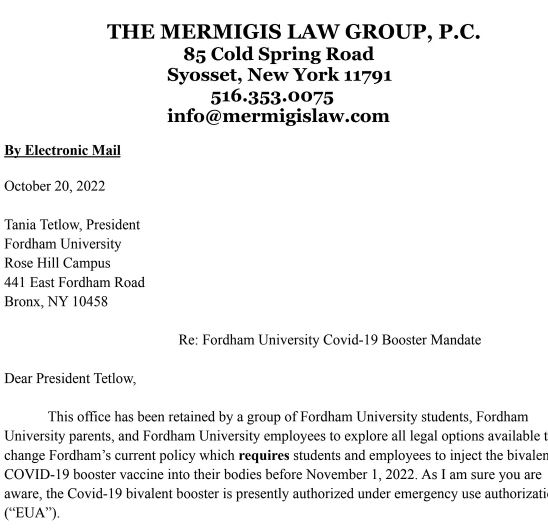 Members of the Fordham community are outraged. They are speaking out and taking action.

On September 27th, Fordham University announced that all students, faculty and staff would be required to get the bivalent booster by November 1st. Fordham is one of 17 colleges that has explicitly announced they will mandate the bivalent booster. If students and employees do not comply by November 1st, the University has stated they run the risk of being banned from campus, disenrolled or fired. Fordham proclaims the mandate is to “protect the community” but it is well known that these shots do not prevent transmission, and it is unethical and abusive to force healthy young adults to take a novel injection that has no human safety data.

To date, Fordham is the only school in New York State to mandate the bivalent booster. This includes prestigious schools such as Columbia University, New York University and the entire SUNY/CUNY system. Apparently the newly appointed President of Fordham, Tania Tetlow, knows better than the city of New York which recently voted to rescind its private employer vaccine mandate.  She is also completely oblivious to the recent decision by a lower court judge in New York who ordered that the City must reinstate all fired unvaccinated city employees because “[b]eing vaccinated does not prevent an individual from contracting or transmitting COVID-19.” The judge’s opinion also noted that the mandate “violates… due process rights” and is “arbitrary and capricious.”

A few months ago, Wake Forest was one of the first universities to announce that they would mandate the bivalent booster, but on October 12, they changed their mandate to a recommendation. Other colleges such as Bowdoin College and Williams College have also walked back booster mandates, and on October 25, The University of the South announced that it is “lifting both the original COVID-19 vaccination requirement and the subsequent booster mandate.”  As this news breaks, Fordham is doubling down by requiring a second booster shot.

Fordham’s emails to the community and articles in The Fordham Ram are fraught with false statements and coercive language such as boosters are needed to “keep Fordham’s in-person experience alive” and “students should want to get the booster for the sake of others, even if they themselves feel they will be safe if they contract COVID-19.” In none of the communications to the community has Fordham offered any scientific evidence or justification for their second booster mandate. Instead, administrators continue to use empty platitudes such as “there is an abundance of evidence” without actually linking to any evidence and emotionally manipulative nonsense such as “you are saving lives.” Fordham has a duty to share all evidence that they are using to justify this new mandate because despite what they say, there is zero data to support that mandating more boosters is “helping to keep the members of the Fordham community healthy and safe.”

As a direct result of the bivalent mandate announcement (made after tuition was paid and refunds could no longer be requested), a group of parents united to form Fordham Parents Together. The group, representing over 500 families and alumni, is on a quest to get answers from Fordham’s administration such as why are you mandating an experimental medical treatment that was never tested on humans? Why are you mandating a shot that does not prevent the spread of the COVID-19 virus? Are you aware that similarly formulated COVID-19 vaccines have caused dangerous side effects and that young adults have a 99.997% virus survivability rate? In an effort to stop the new mandate, Fordham Parents Together wrote a letter that has been signed by over 1,200 community members, but Fordham says the “opposition to the requirement is negligible.”

Fordham faculty and staff members created a petition, and it has gained over 100 signatures. Similar to the parents, they are demanding an immediate halt to Fordham’s bivalent booster mandate. In order for employees to secure a religious exemption to the bivalent booster, they are required to fill out an extremely invasive and onerous document justifying their beliefs.

Students who have the most to lose have joined together and created their own petition, and they have even written articles in The Fordham Ram. They have a shared goal of defeating the new mandate which is neither backed by data nor in compliance with Fordham’s lofty Jesuit ideal of “cura personalis” which means care of the person. Instead this mandate is forcing students to expose themselves to an increased risk of myocarditis, menstrual disruption and many other medical issues.

At the time of this post, the University has not responded to any of “negligible” letters or petitions.

On Friday October 14, 2022, Fordham Together staged a protest at the Rose Hill campus.  Parents, faculty and students gathered at the front gate to make their voices heard. Several of them spoke with the local media outlets (CBS New York, News 12 and The Bronx Times) that covered the event. One parent told The Fordham Ram that additional boosters were optional for her 80 year old mother who lives in an assisted living facility on Long Island; yet Fordham is requiring her healthy 21 year old to get the shot or risk being banned from campus. Others in attendance questioned the timing of the announcement after fall tuition and fees had been paid and noted that the mid-semester November 1 deadline makes it nearly impossible to transfer.

Fordham’s mission is “to foster in all of its students life-long habits of careful observation and critical thinking,” but they contradict this mission when they eliminate the opportunity for students to analyze the data and their own unique health circumstances in order to make the most informed choice possible. The bivalent booster (and all COVID-19 vaccines) should be optional. Fordham should restore the tenet of  informed consent and let the community conduct their own risk/benefit analysis. To remove informed consent by mandating people to participate in what can only be described as a large-scale pharmaceutical clinical trial is criminal behavior.

The administration is taking the arrogant posture of not engaging in any conversation with parents, employees and students regarding their concerns. Instead all emails to the university get a form letter response with outdated talking points and vagaries about “being safe.” They have also declined opportunities to comment for multiple media outlets who attended and reported on the October 14 rally and who continue to report on Fordham’s second booster requirement.

Many are also left wondering what could possibly motivate Fordham to alienate so many families with the additional mandates and the aloof tone they are taking in regard to these very real concerns. Enrollment will certainly be affected since prospective students and athletic recruits are not allowed on campus unless they are “up-to-date” on their COVID-19 vaccines, which as of November 1 will include the new bivalent booster. All eligible visitors must show proof of having received the bivalent booster including all visiting parents, sports teams,  local community members, guest speakers and vendors. Since only 4% of the US population has elected to get the new bivalent shots, Fordham is closing its gates to 96% of the public.

Alumni are also speaking out, and as one of them, I am disgusted to admit that I attended Fordham University. I will likely never regain the respect I once had nor will I ever donate another penny to this self-proclaimed “premier” Jesuit institution. Judging by the community outcry and the responses on social media, it is fair to say I am far from alone. Along with enrollment and the oh-so-important yield on applications, Fordham should expect a significant drop in alumni giving as a direct result of this policy and their stubborn refusal to engage with their community.

With little choice and the compliance deadline only a few days away, Fordham Families Together have retained The Mermigis Law Group. The law group sent a letter to Fordham stating that the University is “deliberately taking away each student’s statutorily guaranteed right to decide whether to accept or refuse administration of the COVID-19 vaccines” and “[t]o avoid litigation….reverse the bivalent COVID-19 booster requirement.”

Although Fordham’s mascot is the Ram, the administration is behaving like sheep blindly following “The Science” as handed down from politicians and bureaucratic agencies instead of evaluating constantly emerging data on risks and adverse events such as myocarditis and menstrual disruptions. One can’t help but to assume that Fordham is clout-chasing by trying to please the progressive left and putting their entire community at risk. Whatever their incentive might be, their goal is clearly not the health and well being of their community. The words “cura personalis” no longer apply to my once beloved alma mater, and they may have fallen too far from grace for many of us to ever trust them again.