An Open Letter to Wellesley’s President 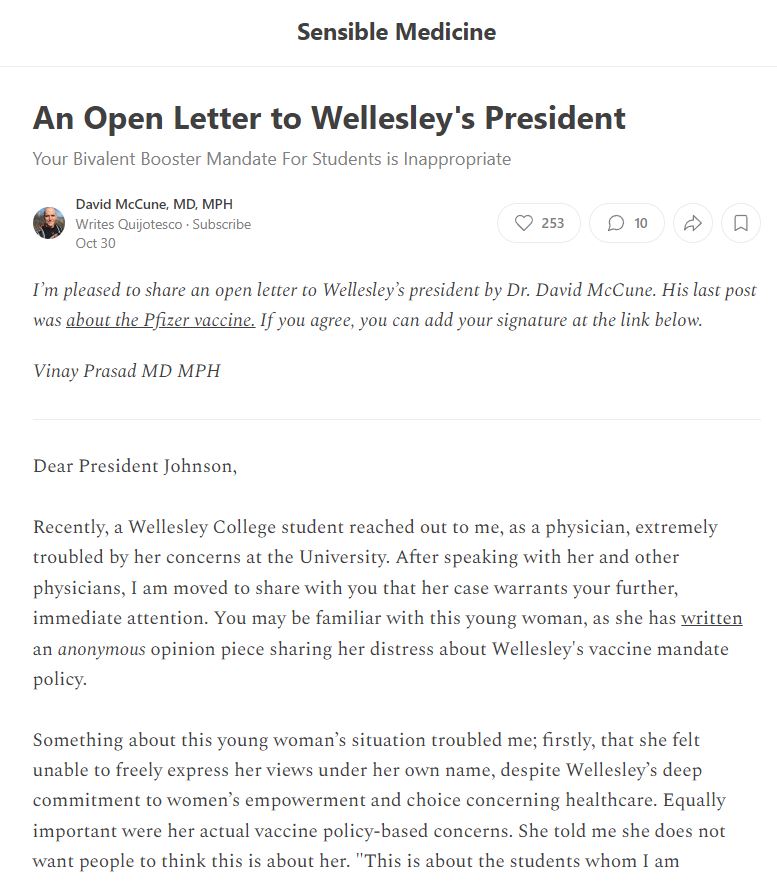 Your Bivalent Booster Mandate For Students is Inappropriate

I’m pleased to share an open letter to Wellesley’s president by Dr. David McCune. His last post was about the Pfizer vaccine. If you agree, you can add your signature at the link below.

Recently, a Wellesley College student reached out to me, as a physician, extremely troubled by her concerns at the University. After speaking with her and other physicians, I am moved to share with you that her case warrants your further, immediate attention. You may be familiar with this young woman, as she has written an anonymous opinion piece sharing her distress about Wellesley’s vaccine mandate policy.

Something about this young woman’s situation troubled me; firstly, that she felt unable to freely express her views under her own name, despite Wellesley’s deep commitment to women’s empowerment and choice concerning healthcare. Equally important were her actual vaccine policy-based concerns. She told me she does not want people to think this is about her. “This is about the students whom I am concerned about who are being shamed into silence.” Thus I am writing on her behalf, with the hope that you will listen to her and take her, and other students like her at Wellesley, seriously.

As a physician, I focus on three points of fact concerning the mandate to which this woman, under Wellesley’s charge, must consent despite her fundamental opposition:

Wellesley’s current policy states that students are required to receive the bivalent booster by December 1, 2022. The provided rationale behind this is “to avoid an outbreak early in the spring semester.” Yet this goal is unsupported and unsubstantiated. No information about the new booster has been released by either the pharmaceutical companies or by the Food and Drug Administration. Worryingly, recent small studies of human antibody responses have been published as pre-prints, attracting global medical attention. These suggest the newly mandated bivalent vaccine may bias antibody responses toward older variants. Add to this the increasing evidence that the vaccine – whether the primary series or the booster – have limited ability to reduce transmission, and there is no valid case that Welleseley’s mandatory vaccination policy will prevent any spring outbreak (or reduce it in a meaningful way). While the booster may ultimately prove beneficial for some groups, there is no basis to the notion that it will achieve the stated goal of the policy.

Spread the love
Spread the love
Previous StoryFordham Mandated the Bivalent Booster. The Deadline is November 1st.
Next StoryTim Robbins and the Lost Art of Finding Common Ground