“Evil Grows in Darkness: Champions Rising Up to Shine Light” 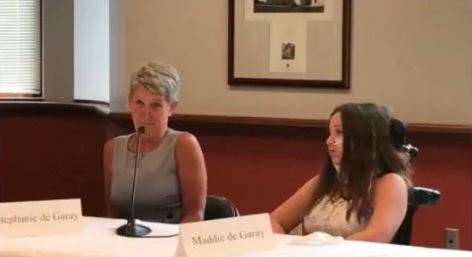 Those of us vaccine injured believe only 2 words are needed to prove Pfizer fraud: “Maddie DeGaray.” If you don’t know who Maddie is, you have been living a life in darkness, which is exactly what our government wanted by trying to withhold the Pfizer Covid vaccine documents. But before we go there, a little about Maddie, one of the many vaccine injured heroes.

Thanks for reading Uncensored Vaccine Injured Newsletter! Subscribe for free to receive new posts and support my work.

Maddie was a healthy, active 12 year old who was a “straight A” student with lots of friends.  On January 20th 2021, Maddie, received her second dose of the Pfizer covid vaccine as a participant in the clinical trial for 12-15 year-olds at Cincinnati Children’s Hospital.

Now she is a 13 year old in a wheelchair with a feeding tube. Over the past one and half years, Maddie has been to the ER more than 10 times and hospitalized totaling over 2 months.

In the trial, Pfizer and the Gamble Program summarized her symptoms as: One participant experienced an SAE reported as generalized neuralgia, and also reported 3 concurrent non-serious AEs (abdominal pain, abscess, gastritis) and 1 concurrent SAE (constipation) within the same week. The participant was eventually diagnosed with functional abdominal pain. The event was reported as ongoing at the time of the cutoff date

This  is clearly an inaccurate misrepresentation of Maddie’s reality.

Maddie started having severe symptoms within hours of her 2nd shot. But, so far no one is interested in finding out why. Not Pfizer who reported her symptoms as abdominal pain, not Cincinnati Children’s Hospital who ran the trial, not the FDA, CDC nor the NIH.

Maddie’s case was hidden from the very beginning. She is still being hidden and ignored by our government and by big pharma.

To read more about our hero, Maddie, visit here: 👇👇

For there is nothing hidden that will not be disclosed.

Evil grows in darkness but the veil of darkness is being lifted and the light is shining thanks to Brook Jackson, the Pfizer whistleblower; Aaron Siri and the Informed Consent Network; and, Dr. Naomi Wolf of Dailyclout and her thousands of citizen heroes painstakingly going through every word of the Pfizer Freedom of Information Act (FOIA) documents.

The Freedom of Information Act Request

The nonprofit that won the FOIA case, Public Health and Medical Professionals for Transparency, sued the US Food and Drug Administration (FDA) last September, claiming that the agency denied its request to expedite the release of Pfizer vaccine review documents via the FOIA. In November, the FDA proposed releasing around 500 pages of the documents each month — which would fulfill the organization’s FOIA request in about 55 to 75 years.

In January of this year, U.S. District Judge Mark Pittman of the Northern District of Texas required the FDA to release around 12,000 documents immediately, and then 55,000 pages a month until all documents are released — totaling more than 300,000 pages.

To view the documents released to date under the FOIA visit:👇👇

Out of darkness, into to light! Call to action.

Dr. Naomi Wolf and her team of citizen warriors for democracy have undertaken an independent study to review the Pfizer vaccine documents currently being released under the FOIA request. These 3000 plus heroes are doctors, lawyers, researchers, CEOs…and, everyday citizens, who simply want transparency and truth.

Through this process, Dr. Naomi Wolf already revealed shocking Pfizer and FDA malfeasance and horrifying revelations about the Pfizer vaccines and the Pfizer trial that FDA wanted to keep hidden for 75 years.

Visit the Dailyclout to read about the great work being done by Dr. Wolf and her team of citizen heroes: 👇👇

Brook Jackson, whistleblower and clinical trial expert, was overseeing the Pfizer COVID-19 vaccine trial in Texas. What she witnessed was shocking. Last year, the British Medical Journal (BMJ) reproduced evidence in an article titled, “Researcher blows the whistle on data integrity issues in Pfizer’s vaccine trial.” In it are cited revelations of poor practices and raises concerns about safety, data integrity and oversight.

After repeatedly notifying Ventavia of the problems, Brook Jackson, also emailed a complaint to the FDA. Ventavia fired her later the same day.

Jackson is suing Pfizer, Ventavia, and ICON, a business participating in the trial, under the False Claims Act.

The BMJ article can be found:👇👇

Go here to read the lawsuit: 👇👇

To the heroes standing up and shedding light, we see you, we hear you, we love you and we THANK YOU!

To see and hear more personal stories of the vaccine injured, please visit: 👇👇

Spread the love
more
This DailyClout article is the writer’s opinion.
One of our country’s most important freedoms is that of free speech.
Agree with this essay? Disagree? Join the debate by writing to DailyClout HERE.
Spread the love
more
Previous StoryRoe v Wade: Why Can’t We Have Important Conversations?
Next StoryIs an Iron Curtain Closing Around America?