Women Should Not Have To Fear Flying. 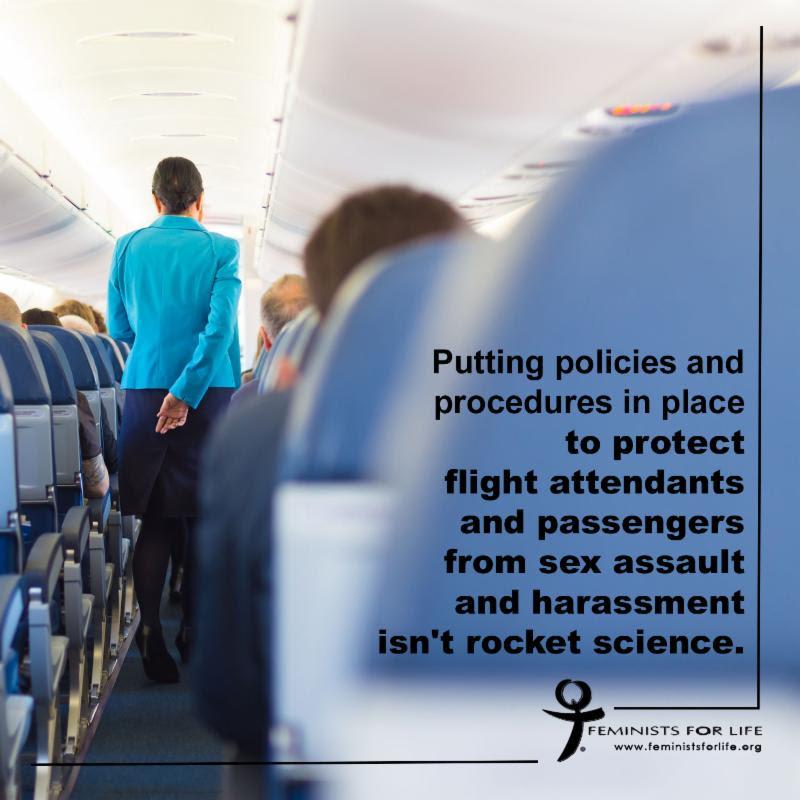 Via Feminists For Life

CNN interviewed four women who were sexually assaulted and harassed on commercial flights. “If somebody reports a crime to an airline, it should be flagged. It should not be treated as if it’s lost luggage,” Dvaladze told CNN, referring to assaults midair during commercial flights.

Most telling, Sara Nelson, a United Airlines flight attendant who is president of the union reported, “In my 22 years as a flight attendant, I have never taken part in a conversation — in training or otherwise — about how to handle sexual harassment or sexual assault.” And flight attendants are often victims themselves. “Even today, we are called pet names, patted on the rear when a passenger wants our attention, cornered in the back galley and asked about our ‘hottest’ layover, and subjected to incidents not fit for print,” she wrote in an op-ed published by The Washington Post.

FFL President Serrin Foster urges all employers, including those who carry passengers on the ground or in the air, to publish procedures immediately and educate employees and passengers now about what will happen to those who sexually harass or assault other passengers. “They should do it upon hiring staff, educate staff who are already hired, and include a notice of zero tolerance during boarding procedures.”

In December, a United Airlines CEO called for zero tolerance. “A month later, we are still waiting,” Foster said. “This isn’t rocket science. Sexual assault should be reported and prosecuted as you would for other assault. Intoxication is no excuse, and frequent flyers shouldn’t be treated as exceptions to the rule. What would they do if a belligerent passenger started punching someone else or started molesting a child? Wouldn’t they subdue the offender or separate him or her from other passengers and land the plane if needed for authorities to arrest the accused? Meanwhile, have your smartphones at the ready — and hit record.”

FFL also continues to urge members of Congress to implement transparent practices and procedures with past and future accusations of harassment and assault by any staff on the Hill. “We appreciate the bipartisan efforts to change the culture on the Hill as well as those of U.S. Supreme Court Chief Justice John Roberts, who is leading an effort to ensure appropriate training and reporting happens in the judicial system,” Foster said. Judge Alex Kozinski, who served on the 9th Circuit Court, recently resigned in the wake of accusations of sexual misconduct.

Foster served on the National Taskforce Against Sexual Assault and Domestic Violence, which worked to pass the Violence Against Women Act, and also testified before the U.S. House Judiciary Committee in support of the Unborn Victims of Violence Act, also known as “Laci and Conner’s Law.”

Full disclosure: Jane Sullivan Roberts served as FFL’s former Board Executive Vice President and counsel. She married John Roberts while she was on the board and they were both practicing law in Washington D.C. She resigned as counsel once he was confirmed to the Supreme Court. Her term as Vice President had expired years earlier.

To request an interview with President Foster, please email us at info@feministsforlife.org.

Feminists for Life of America is a nonsectarian, nonpartisan 501(c)(3) nonprofit organization.

For more information, go to

Women Deserve Better, Refuse to Choose, and The American Feminist are registered trademarks of Feminists for Life of America.

FFL Pregnancy Resource Forum(SM) is a registered service mark of Feminists for Life of America.

Spread the love
Spread the love
Previous StoryTHIS WEEK IN CONGRESS – Tax Bill Passes, Congress Puts a Band-Aid on the Budget, and A Bill Supports Women and Minorities in Heading into Space
Next StoryCurtis Ellis: THE ‘BOMB CYCLONE’ AND DEMS’ ENERGY DISASTER