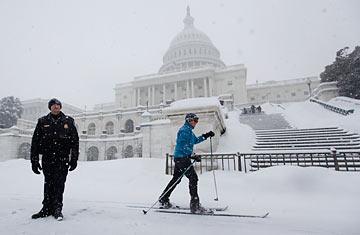 A convergence of weather patterns created the nor’easter that brought frigid temperatures and snow to the eastern U.S. from Mississippi to Maine.

Brutal cold strained the electric power grid. Utilities relying on natural gas for power generation clamored for supplies as fuel was diverted to heat homes and businesses. Further, a lack of pipelines created a bottleneck for delivering gas to power plants.

Recall that the Obama administration aggressively sought to eliminate coal from the nation’s fuel mix. Unlike natural gas or renewables, which Obama favored, utilities can stockpile coal for immediate use when demand soars.

The Trump administration understands this, and the plan put forward by Energy Secretary Rick Perry appropriately prices coal against natural gas so utilities have the flexibility they need to ensure energy grid security.

On another energy front, the Northeast is heavily dependent on fuel oil for home heating, and the frigid temperatures left suppliers scrambling to meet demand.

But Obama-era policies on renewable fuels threaten the very existence of independent refiners in the Northeast.

WND has reported on the EPA’s Rube Goldberg system for trading ethanol credits, known as RINs. Independent refiners are forced to spend millions under a compliance scheme that benefits speculators at the expense of energy producers and consumers.

Reforming the previous administration’s renewable fuel mandate will ensure a steady supply of fuel oil for the Northeast without constructing one new pipeline, since the fuel will continue to be produced where it’s consumed.

These are just two (extremely timely) examples of Obama policies that weakened America’s energy security and endangered grid security. But there’s more to the story.

Barack Obama declared war not only on coal – he wanted to phase out the use of all so-called fossil fuels under the banner of “environmentalism.”

At one time, environmentalists promoted the use of natural gas, touting it as a clean-burning fuel. No more. The new green orthodoxy says it contributes to global warming and therefore must be banned.

Like his policies on Iran, Israel, immigration, health care, taxes, trade and regulation, President Trump’s energy policies are a 180-degree reversal of Obama’s.

President Trump has opened the oil and gas reserves lying off the nation’s shores and in the Arctic hinterlands for production, and has plans to make more than 98 percent of undiscovered, technically recoverable oil and gas resources in federal offshore areas available for future exploration and development.

It’s time to understand the agenda of the radical environmentalists in the Democratic Party, an agenda they will never admit openly.

President Donald Trump has spared us from it. Last year he began and this year he will continue to undo the damage it has done to our nation and economy.

In November, it will be up to us to keep control of Congress so we can Make America Great Again.

Spread the love
more
Spread the love
more
Previous StoryWomen Should Not Have To Fear Flying.
Next StoryBill to Privatize Tech of Creepy TSA Airport Screenings; Bill Gives Pres Unchecked Access to Your Biometrics and May Let Him Call You “Associate” of “Terrorist Organization”
--