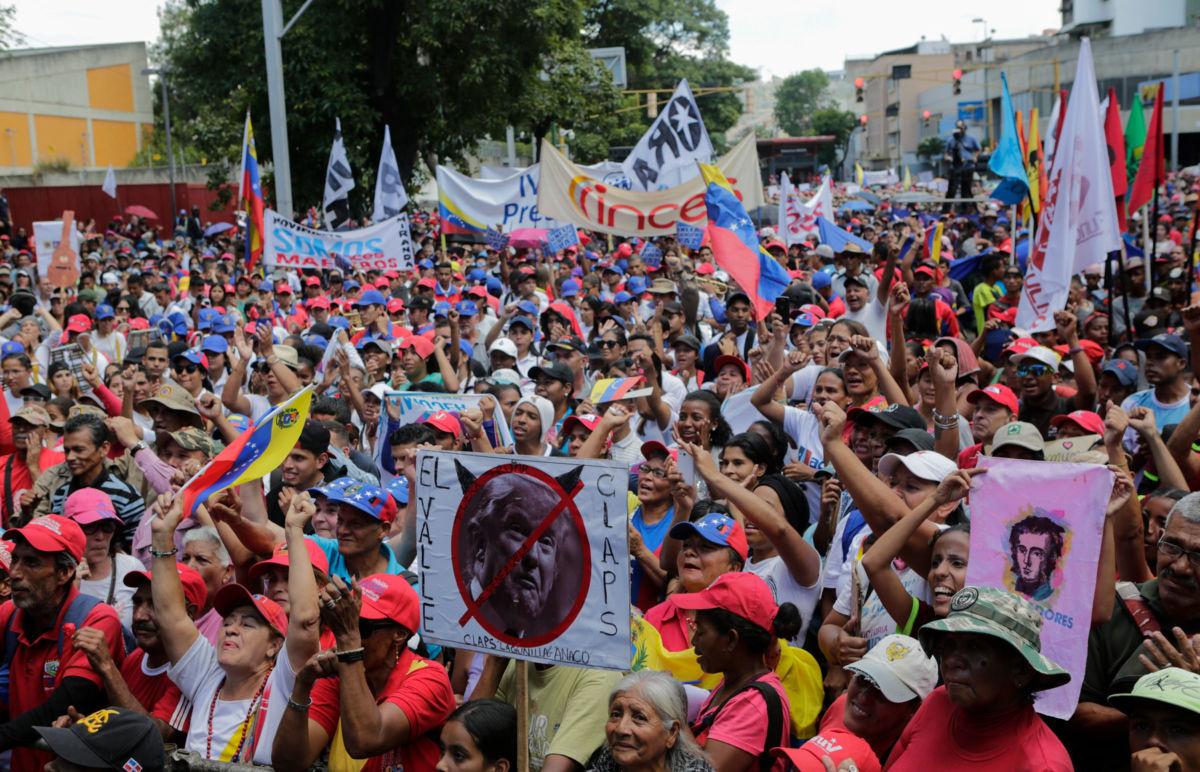 he United States is taking illegal and dangerous actions to execute regime change in Venezuela. In January, Juan Guaidó declared himself “interim president,” in a strategy orchestrated by the United States to seize power from President Nicolás Maduro.

In March, Guaidó announced that “Operation Freedom,” an organization established to overthrow the Maduro government, would take certain “tactical actions” beginning on April 6. Part of the plan anticipates that the Venezuelan military will turn against Maduro.

This strategy is detailed in a 75-page regime change manual prepared by the U.S. Global Development Lab, a branch of the U.S. Agency for International Development (USAID). The manual advocates the creation of rapid expeditionary development teams to partner with the CIA and U.S. Special Forces to conduct “a mix of offensive, defensive, and stability operations [in] in extremis conditions.”

Some of these actions will, in all likelihood, involve combat operations. A USAID official said, “Anybody who doesn’t think we need to be working in combat elements or working with SF [special forces] groups is just naïve.”

The manual was written by members of Frontier Design Group (FDG), a national security contractor whose “work has focused on the wicked and sometimes overlapping problem sets of fragility, violent extremism, terrorism, civil war, and insurgency,” according to its mission statement. FDG was the “sole contractor” that USAID hired to write a “new counterinsurgency doctrine for the Trump administration,” Tim Shorrock wrote at Washington Babylon.

Guaidó is funded by USAID’s sister organization, the National Endowment for Democracy, which is notorious for meddling in other countries and putting a good face on the CIA’s dirty business, as the late journalist William Blum explained.

Writing in Salon, Medea Benjamin and Nicolás J. S. Davies cited Blum’s statement that the United States generally opts for “low-intensity conflict” over full-scale wars. They noted that “’low-intensity conflict’ involves four tools of regime change: sanctions or economic warfare; propaganda or ‘information warfare’; covert and proxy war; and aerial bombardment. In Venezuela,” they added, “the U.S. has used the first and second, with the third and fourth now ‘on the table’ since the first two have created chaos but so far not toppled the government.”

Indeed, a combination of punishing sanctions imposed by the United States and blackouts exploited if not engineered by the U.S. have been unsuccessful in removing Maduro and installing Guaidó.

The Venezuelan economy was in dire straits before the Trump administration imposed harsher sanctions in January.

Crude oil production in Venezuela fell by 142,000 barrels a day in February, according to OPEC. “This shows that the sanctions imposed by the Trump administration in January had an immediate, very harsh impact on Venezuela’s economy, and on the general population, which depends on the export revenue from oil for essential imports including medicine, food, medical equipment, and other life-saving necessities,” Mark Weisbrot, co-director of the Center for Economic and Policy Research, stated.

If this drop in oil production continues at the same rate, Venezuela stands to lose more than $2.5 billion in oil revenues during the next year. The U.S.-imposed sanctions will speed that decline.

On April 4, Johns Hopkins Bloomberg School of Public Health and Human Rights Watch issued a 71-page report documenting food and medicine shortages and sharp increases in disease throughout Venezuela. They characterize the situation as a humanitarian emergency and recommend a full-scale response by the United Nations secretary general.

Guaidó’s opposition “plans to use aid as their chief political weapon,” according to The New York Times.

Although in February, the United States tried to deliver humanitarian assistance to Venezuela though Colombia, Maduro refused to accept it.

“The U.S. misuse of ‘humanitarian assistance’ as a cover for smuggling weapons and other non ‘humanitarian’ items also has a long history” in Latin American countries, Alfred De Zayas, former UN special rapporteur in Venezuela, said in an interview with AntiDiplomatico. De Zayas called out the United States for its hypocritical policy: “It is not possible to be a major cause of the economic crisis — having imposed … sanctions, financial blockades and economic war — and then mutating into a good Samaritan.”

The U.S. government’s cynical strategy is to increase the suffering of the Venezuelan people, in hopes they will rise up against Maduro. This flawed approach was used by the Eisenhower administration after the 1959 Cuban Revolution. It was based on a State Department memo that proposed “a line of action that makes the greatest inroads in denying money and supplies to Cuba, to decrease monetary and real wages, to bring about hunger, desperation and the overthrow of the [Fidel Castro] government.” The U.S. economic blockade against Cuba continues to hurt the people but they have not overthrown their government.

At the end of March, the Venezuelan government and the opposition agreed that the International Federation of the Red Cross and Red Crescent Societies would establish a global relief campaign for humanitarian aid.

Venezuela has asked for and received assistance from the United Nations, Russia, China, Turkey, India and Cuba, De Zayas reported, “but that was humanitarian and offered in good faith and without strings attached. U.S. aid is the ‘fruit of the poison tree.’”

On April 3, Sen. Marco Rubio (R-Florida), who has helped lead the charge for regime change in Venezuela, introduced a 76-page bill in the Senate that would approve $400 million in assistance to Venezuela and take steps to facilitate regime change. It would assess “the declining cohesion inside the Venezuelan military and security forces and the Maduro regime,” and “describe the factors that would accelerate the decision making of individuals to break with the Maduro regime” and recognize Guaidó as interim president of Venezuela.

The Rubio bill would also require briefing on “the full extent of cooperation by” Russia, China, Cuba and Iran with the Maduro government.

At the end of March, the Russian government sent 100 troops to Venezuela. Russia’s Foreign Ministry Spokeswoman Maria Zakharova said, “Russian specialists … arrived in accordance with the clauses of a bilateral agreement on technical-military cooperation.”

In early April, Russia announced plans to install a training facility for military helicopters in Venezuela. The Trump administration is rattling its sabers at Russia. U.S. National Security Adviser John Bolton warnedthat the United States considers the presence of military forces from outside the Western Hemisphere a “direct threat to international peace and security in the region.”

Russia, however, denies that its military presence in Venezuela poses a military threat. “The Russian side did not violate anything: neither the international agreements nor Venezuelan laws,” according to Zakharova.

Venezuelan Foreign Affairs Minister Jorge Arreaza cited the hypocrisy of U.S. policy. He said it is “such cynicism that a country with more than 800 military bases around the world, much of them in Latin America, and a growing military budget of more than US$700 billion, intends to interfere with the military-technical cooperation program between Russia and Venezuela.”

Veteran Intelligence Professionals for Sanity, an organization of former intelligence officers and other national security practitioners, wrote in a memo to Donald Trump, “Your Administration’s policies regarding Venezuela appear to be on a slippery slope that could take us toward war in Venezuela and military confrontation with Russia.”

The U.S. government has also threatened Cuba for its support of Venezuela. Vice President Mike Pence said the Trump administration would take “strong action not only to isolate Venezuela but also we’re looking at strong action against Cuba.” On April 5, Pence announcedthat the United States is imposing sanctions on two companies that deliver Venezuelan crude oil to Cuba. And, egged on by Rubio, Trump is considering extending the economic blockade against Cuba.

The United Nations Charter prohibits the use or threat of force against the territorial integrity or political independence of another nation. Likewise, the Charter of the Organization of American States forbids any country from intervening in the internal or external affairs of another nation. And the International Covenant on Civil and Political Rights guarantees the right to self-determination.

Idriss Jazairy, the UN Special Rapporteur on the negative impact of sanctions, said, “Coercion, whether military or economic, must never be used to seek a change in government in a sovereign state.”

H.R. 1004 “prohibits funds made available to federal departments or agencies from being used to introduce the Armed Forces of the United States into hostilities with Venezuela, except pursuant to (1) a declaration of war, (2) a specific statutory authorization that meets the requirements of the War Powers Resolution and is enacted after the enactment of this bill, or (3) a national emergency created by attack upon the United States or the Armed Forces.”

Spread the love
more
This DailyClout article is the writer’s opinion.
One of our country’s most important freedoms is that of free speech.
Agree with this essay? Disagree? Join the debate by writing to DailyClout HERE.
Spread the love
more
Previous StoryOpinion: Lawyers Worldwide Urge International Court: Investigate Israeli Crimes
Next Story“Paycheck Fairness” for Women at Last?