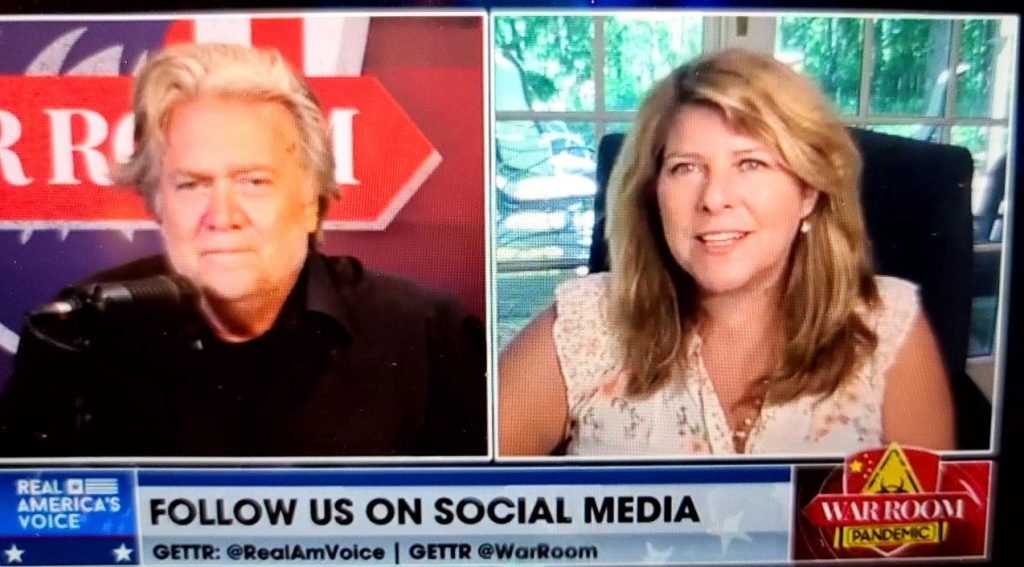 Transcripts from Bannon’s War Room on Rumble: Dr. Wolf: The CDC Finally Admitted The Vaccinated And Unvaccinated Have Same Protections

I want to go to Naomi Wolf for a second because the administrative state has also come after you. You’ve been a truth teller from day one and now we know from CDC we’ll get to that in a second, but you’ve been attacked relentlessly Naomi Wolf. Walk us through that.

Yeah, it’s a really sad time for America on many fronts and one of them is personally very very scary and upsetting. I found out two Fridays ago through an America First legal FOIA and God bless them. They secured 268 internal documents from the CDC and my lawyer sent me my tweet in those documents and said you’re named in here.

And to my horror indeed someone named Carol Crawford who is the digital outreach director of the CDC, the agency that uses our tax dollars to protect Americans from harm and disease, she is coordinating with Todd O’Boyle, I gather with Twitter, a bunch of other Twitter people and the Census guy for some reason and she is coordinating a longstanding conference to address misinformation with Big Tech.

And then she uses law enforcement language which is super scary, and I’ll get to the tweet itself in a minute, but she said “Also we are standing up a BOLO COVID misinformation meeting and inviting all Tech platforms and indeed it turns out that their working with Twitter, Google and Facebook and the Census. And the reason the census is so scary is that they have all of your personal information. So, they were breaching confidentiality on multiple fronts and unlawfully it appears, coordinating with for- profit companies to suppress the First Amendment rights of American citizens.

So, here’s the tweet that’s so upset her it’s me saying hundreds of women on this page say they’re having bleeding or clotting after vaccination or that they bleed oddly being around vaccinated women which actually many many women were saying and the volunteers, the Pfizer research team volunteers have identified that Pfizer defines the exposure of the vaccine is including inhalation and skin contact as well as sexual intercourse.

So, shedding is a real thing according to Pfizer and then I said, “unconfirmed needs more investigation but lots of reports”. And that was what I tweeted and in doing that I’m doing exactly what I’ve been doing for 35 years Steve. I’m being an investigative reporter with a primary focus in three previous bestsellers on women’s health, women’s sexual health, women’s reproductive health.

When hundreds of women report menstrual irregularity heavy bleeding extended bleeding two periods a month, things I won’t even go into that are horrible. It’s a red flag and you don’t need to be you know a rocket scientist to know that. And Brownstone points out that as far as they know among those targeted was Naomi Wolf who so far as I know says, the wonderful Jeffrey Tucker, was the first one to reveal the relationship between vaccination and irregular menstrual patterns.  For talking about this subject, she is permanently banned from Twitter.   This direct hit was ordered by the CDC itself.  Again, the digital outreach used a law enforcement term BOLO, be on the lookout.

So, in my book the bodies of others I describe what happened on the receiving end.  I didn’t have this information from the inside of the CDC at that time but on the receiving end I sure felt the massive power of Twitter and Facebook and Google and the United States government at the highest levels slamming down on me for reporting something that was true. I was deplatformed from Twitter.  Twitter also apparently took tweets that I composed and immediately deleted cause they were badly worded. They only existed in the ether. Twitter kind of resuscitated them somehow and they also took tweets of mine out of context and they went to all these news outlets that I’ve written for that I’ve been a columnist for or that syndicate me for the last 35 years like The Guardian, like the BBC, people who are getting millions of dollars from the federal government or from the Gates Foundation to engage in COVID education meaning smearing people like me who raise criticisms of the mRNA vaccines for instance and then there was this like global smear campaign that my career, I try not to whine especially not on your show but my career has not recovered from it.  I was called bat ass crazy. I was called a conspiracy theorist. I was called counterfactual. Media matters came out and attacked me for this accurate reporting.

Here’s what’s interesting, the big proponents of women’s rights and you know they did all these things she’s hysterical, she’s crazy. I mean they made all the smears they try to make when a woman stands up and says hey here’s the way it is and puts out the facts. That’s what I found most fascinating.

All these proponents, the attacks on you were 1000% misogynist. I mean I was kind of stunned how brutally and quite frankly you’re an apostate right. You used to be part of the club and now you’re saying hey you guys are I don’t know what you guys are looking at but you’re not looking at information.  I’ve only got so much time I got to get to this.

The CDC you got to help me out here.  The CDC, and I thought this was a parody at first it was like the IRS want to add the other day.  I thought these are memes up on GETTR on Truth Social that people are just making up. They’re so good the IRS that you got to be ready to use lethal force. We were a day after reporting it cause I had to ascertain it was actually true which it was.

The CDC correct me if I’m wrong cause I am far from an expert.  I depend on guys like you and Malone and all the guys that help us out.  Did they just come out yesterday and put out a statement that in future treatment or in protecting, it’s no difference between vaccinated and unvaccinated did I read that correctly or is that also a parody?

You know it sounds like a parody. It is tragically true it’s literally like the last year and a half of the president and the CDC saying go ahead and create a two tier discrimination society exactly like Jim Crow laws, divide Americans into clean and unclean, the unvaccinated can kill you can kill your mom, a winter of death and destruction from the unvaccinated, we’re losing patients with the unvaccinated, you have to stay home, you have to lose your career in the military,  you have to lose your career as a first responder or be forced to have these mRNA injections which now we know have catastrophic and lethal possible side effects.

That all vanished into thin air it’s over oops sorry you’re fine.  I just I sent that to my mom and said please send this to you know all of my extended family so that they can stop discriminating against us after a year and a half.   It’s like it’s like the end of the Wizard of Oz. it all vanishes in a puff of smoke.

And nothing has changed like the science hasn’t changed vaccinated and unvaccinated people were always exactly identically a threat or not a threat to everyone else. There was no difference.

As soon as this firestorm in Mar-a-Logo ends we’re going to get you back and we’re going to spend more time with the research and everything. Just real quickly how do people go, how do they still volunteer? How do they support and then what’s your social media?

I’ll tell you but I want to warn that what I was deplatformed for turns out to have caused predictably massive miscarriages and spontaneous abortions which we can talk about next time. In the meantime, that’s much more serious than anything that’s happened to me professionally or personally. In the meantime, you can come to Daily Clout.io.  You can read all the reports right there by the amazing War Room Daily Clout Pfizer research volunteers. You can buy “The Bodies of Others” in which you can read about my deplatforming and you can find on GETTR.  Thank you, Steve,