#PfizerDocuments: In the United States, The Legal Battle of Scientists for Transparency 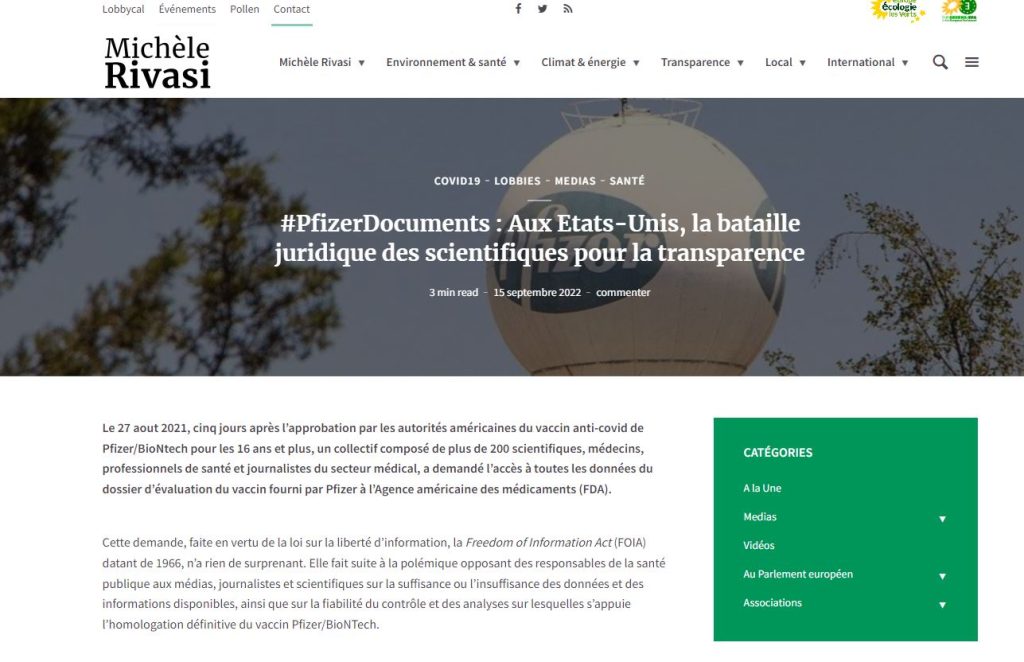 Note: This article was originally published in French. An online translation tool was used and, thus, the translation may not be perfect.

On August 27, 2021, five days after U.S. authorities approved the Pfizer/BioNtech anti-covid vaccine for ages 16 and older, a collective of more than 200 scientists, doctors, healthcare professionals and medical journalists , requested access to all data in the vaccine evaluation dossier provided by Pfizer to the United States Medicines Agency (FDA).

This request, made under the Freedom of Information Act (FOIA) of 1966, comes as no surprise. It follows the controversy between public health officials and the media, journalists and scientists over the sufficiency or insufficiency of the data and information available, as well as the reliability of the monitoring and analyses on which the final registration of the Pfizer/BioNTech vaccine.

The group of ” Public Health and Medical Professionals for Transparency ” ( PHMPT) explains on its website that it was formed for the sole common purpose of obtaining transparency and the publication of documents given by Pfizer. This non-profit collective gives experts and colleagues the opportunity to study these documents and draw their conclusions.

Unlike the European Medicines Agency, the American Medicines Agency (FDA) requires that pharmaceutical companies receive all the data and regular reports they have concerning their products undergoing evaluation. . In the current context, the group of scientists has thus requested access to and publication of more than 400,000 pages of Pfizer documents, as quickly as possible. Note that the FDA only publishes final reports and clinical trial protocols, a small part of the total information it has. The FDA initially replied to the PHMPT that it was going to publish everything… But that it would therefore take approximately 75 years to do so.

A delay justified, according to the FDA, by the colossal work for the staff of the agency to anonymize and publish tens of thousands of pages of documentation. For the scientists of the collective, having access to this information in 2097 makes absolutely no sense. According to them, the independent analysis should take place while the pandemic is ongoing.

In September 2021, the collective thus formally filed a complaint against the FDA with the North Texas Court of Justice arguing that it was urgent to provide American citizens with immediate access to the data and information underlying the process. approval of the Pfizer vaccine, which has become mandatory for several categories of the American population.

February 2022: a court orders to publish everything in less than a year

Since then, other groups of scientists and specialized journalists have studied these documents, continuously analyzing the published batches.

More than 55,000 pages of internal Pfizer documents have already been analyzed by volunteer researchers from a collective called WarRoom, made up of 3,000 highly qualified researchers, doctors, nurses, biostatisticians, medical fraud investigators and laboratory clinicians. Report after report, the WarRoom collective explains and details the content of the Pfizer documents; those that the FDA wanted to keep secret for several decades.

By analyzing these thousands of archive pages, WarRoom was able to confirm, among other things, that:

– Pfizer (and therefore the FDA) knew, since December 2020, that mRNA vaccines were “decreasing in effectiveness” and that recalls would be necessary. The FDA and Pfizer waited until May 2021 to let the general public know.

– Documents classified as “confidential” prove that Pfizer knew that the Spike protein and lipid nanoparticles did not remain in the injection site, in the deltoid muscle, but diffused, in less than 48 hours, into the bloodstream to lodge in the liver, spleen, adrenal glands, lymph nodes and ovaries.

– These documents also show that Pfizer knew as early as February 2021 that its vaccine, which had been administered to Americans for three months already, had caused a large number of adverse post-vaccination side effects. A number so high that Pfizer informed the FDA that it would hire 2,400 additional people to take care of the formalities and the processing of data concerning these side effects. American citizens were therefore not informed of the extent of the adverse effects. At the same time, the FDA knowingly extended the authorization for the emergency use of the BNT16262 vaccine.

– The side effects listed in internal Pfizer documents are completely different from those reported on the official website of the Centers for Disease Control and Prevention (CDC). Thus, an internal Pfizer document recounts, over nine pages, the various adverse effects that have appeared during vaccine trials, the most serious of which are myocarditis, pericarditis, neurological disorders and deep vein thrombosis.

– These documents finally reveal that clinical trials of the Pfizer vaccine have resulted in more than 42,000 adverse effects and the death of more than 1,200 people. Remember that none of this information was communicated when this vaccine received its emergency authorization in the United States.

These first revelations prove the importance of the publication of these internal documents at Pfizer, submitted to the FDA, and now being published following the decision of the American justice.

Attached document: the latest summary of the WarRoom collective

Here is the latest summary of the analyses of the WarRoom collective. As the document is in English, we have started translating it into French. As the next batches of #PfizerDocuments appear, more information will emerge. To be continued…