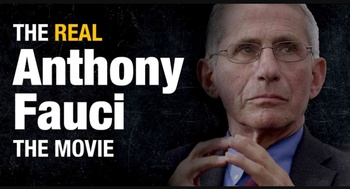 Palm Beach Florida (Newsworthy.ai) Tuesday Oct 25, 2022 @ 9:30 AM Eastern — Best-selling author Dr. Naomi Wolf appears in the new explosive documentary by filmmaker Jeff Hays based on Robert Kennedy Jr.’s best-selling book The Real Anthony Fauci. In this star-studded critical film, Dr. Wolf shares with the audience insights from her best-selling book The Bodies of Others, The New Authoritarians, COVID -19 and the War Against the Human.This documentary traces the roots of COVID, and how we got where we are today and exposes the characters behind the push for lockdowns, mandates, and the rushed, ineffective, and sometimes deadly COVID injections. With an all-star cast of highly esteemed truthtellers, including Dr. Robert Malone, Dr. Peter McCullough, Professor Harvey Risch, Dr. Pierre Kory, Dr. Paul E. Marik Dr. Joseph Mercola, Mark Crispin Miller, and so many more, this documentary is the essential tool critical thinkers and concerned parents need to own.

Mr. Kennedy’s book The Real Anthony Fauci is hailed as the most highly cited book in print. No one has challenged him on the evidence found within it.

Dr. Wolf’s highly researched well received best-seller The Bodies Of Others The New Authoritarians COVID-19 and The War Against the Human explains how billionaires, government agencies, our sworn enemy the Chinese Communist Party, and pharmaceutical giants weaponized fear to achieve financial benefit and authoritarian control they desired.

Don’t miss The Real Anthony Fauci; it is a must-watch for the last-standing journalists who stand with the truth. The fight to overcome the censorship blackouts has begun. Join us to fight for humanity.

Dr. Wolf is available for Interview.

The Real Anthony Fauci is available to view for free until October 27th, 2022. Follow this link to register.

Robert F. Kennedy, Jr. is an esteemed author, with a long list of published books including the New York Times bestseller, “Crimes Against Nature.” Mr. Kennedy was named one of Time Magazine’s “Heroes for the Planet” for his success in helping Riverkeeper lead the fight to restore the Hudson River. His reputation as a resolute defender of the environment and children stems from a litany of successful legal actions. He received recognition for his role in the landmark victory against Monsanto and the DuPont Case that inspired the movie “Dark Waters” (2019).

Jeff Hays, an award-winning filmmaker, author, and television producer since the early nineties, gained national attention with Fahrenhype 9/11 (2004), a response to Michael Moore’s Fahrenheit 9/11. He followed that with On Native Soil (2006).

Dr. Naomi Wolf is a bestselling author, columnist, and professor. She is a graduate of Yale University and received a doctorate from Oxford. She is co-founder and CEO of DailyClout.io, a successful civic tech company. She was a Rhodes scholar and has written for every major news outlet in the US and many globally.