The House of Cards is Tumbling Down: They Tried to Break Us, and They Failed – Christine Anderson 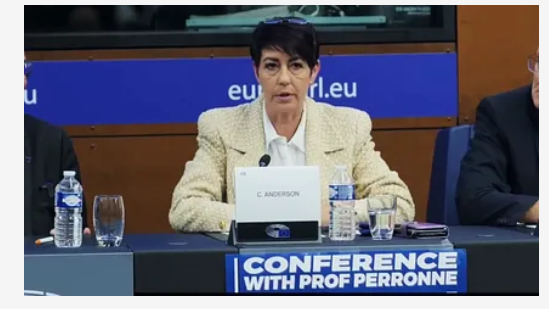 “We all know now the people have been lied to; it was a gigantic lie,” attested German MEP Christine Anderson during a press conference with Prof. Perronne.

“And on this lie, everything that governments, especially in the western democracies, did to infringe on people’s rights to take away their freedom — to lock them in their homes, imposing curfews. All of this was based on that gigantic lie.”

And because of that gigantic lie, Anderson pledges to get to the bottom of things.

But. And that is the other message. None of that would have been possible to do if we did not have the massive, enormous support of you, the people, because you took to the street. You showed your governments that you will not put up with this, and you will not stand for this. And for that, I really thank you. And I applaud you, and I will do so right now!”

“Ursula von der Leyen, EU Commission president, is now under a lot of pressure. And rightly so! The people have a right to know what went on in these contracts with her exchange of SMS (text messages) with CEO of Pfizer, Bourla. The people need to know who they can hold responsible and accountable for whatever may have gone on behind the scenes.

So, Yes. Thank you again. It was your support that kept us going and made all of this possible. And things are changing now. Their house of cards is tumbling down, and it is doing so rightfully.”

“And you know what? One more thing, though.”

“I am sick and tired of being called a Covidiot,” lamented Anderson.

“I much rather be a Covidiot than being a guff idiot!”

The room erupts in applause.

“Because that’s what all these people [who] blindly trusted their governments turned out to be.”

And that — I am very proud of. And I’m proud of the people that I am so honored to be allowed to represent. And I will continue to do just that. Thank you very much.

Wow! Beautifully spoken, MEP Anderson. She’s been an amazing fighter against this nonsense since the beginning.

If you would like to commend Christine Anderson for her efforts, please give her a follow on her various social media platforms:

Tyranny is not possible without compliance

Spread the love
This DailyClout article is the writer’s opinion.
One of our country’s most important freedoms is that of free speech.
Agree with this essay? Disagree? Join the debate by writing to DailyClout HERE.
Spread the love
Previous StoryCrossed Signals
Next StoryWar Against the Human, Negative Effects on Menstrual Cycles Revealed in Pfizer Documents