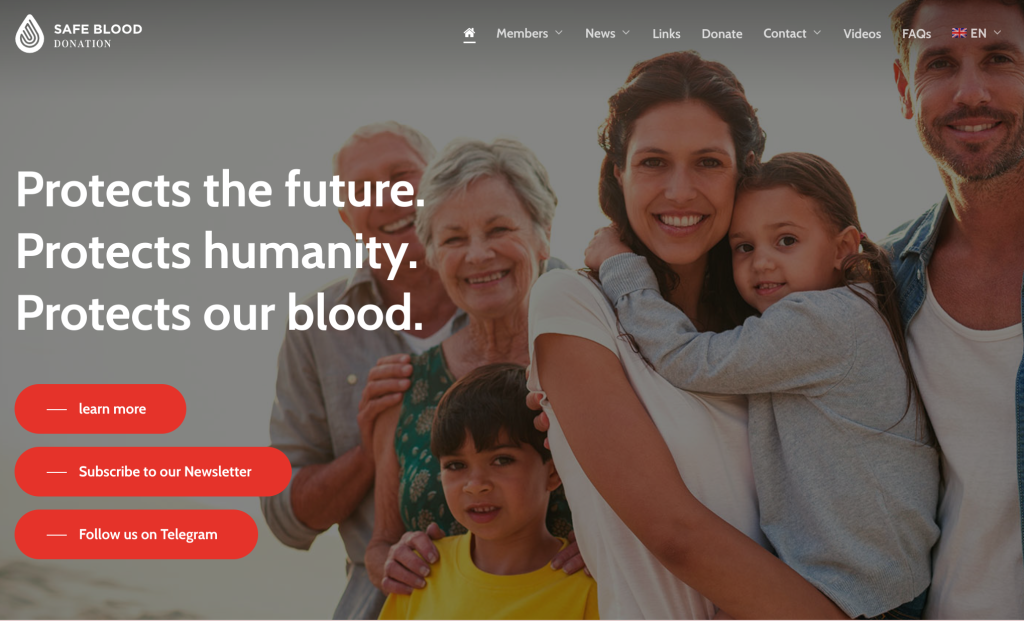 Mr. George Della Pietra is a retired naturopath located in Switzerland. Mr. Della Pietra recently came out of retirement to do his part to defend medical freedom, and save humanity from itself. I had the honor of interviewing Mr. Della Pietra about the organization he recently founded, SafeBlood.

SafeBlood is a non-profit organization with a small core team in Switzerland that was created primarily to address the pressing issue of medical choice. In the last five years or so, many hospitals in Western countries outside of the United States have ceased allowing patients to bring in private blood donors for transfusions. As the harms of mRNA vaccination began to emerge, Mr. Della Pietra recognized the importance of creating an option for people who do not want to accept vaccinated blood in the case of a necessary transfusion.

SafeBlood currently operates as a database of members in 82 countries worldwide of unvaccinated people who have signed up to donate their own blood. In the US they’re already operational, yet in other Western countries, members are facing many challenges attempting to bring private unvaccinated blood donations to be used in medical procedures at hospitals.

SafeBlood in the United States

When Mr. Della Pietra launched SafeBlood 1.5 years ago, he was met with resistance by approximately 99% of the medical professionals he approached. One year later, he received his first query from a medical professional in the United States, and a short few months later, SafeBlood has members in 41 out of 50 states.

Mr. Della Pietra is working on establishing a SafeBlood team presence in every one of the 50 States. Mr. Della Pietra noted that he’s pleasantly surprised at how easy it is to get set up for private blood donations in the US, and they already have members in their database from 41 states. As of now, SafeBlood does NOT have its own private clinics, they work with medical partners. In the beginning, the SafeBlood team approached labs and clinics to offer a partnership, but at this point, the tide has reversed and they field more incoming inquiries than outward marketing.

Like many efforts within the medical freedom movement, SafeBlood and Mr. Della Pietra have been largely ignored by the traditional media, however, there was recently a Vice article that was published which put SafeBlood in a negative light. When asked what his response to Vice would be, Mr. Della Pietra said he would thank them for the visibility and interest their hit piece brought to his organization.

Mr. Della Pietra is currently recommending that the labs and clinics he works with stay under the radar, and offer the services to their clients quietly while not advertising their connection with SafeBlood, due to the natural resistance that SafeBlood is facing from the broader medical establishment. As a private lab or clinician, they have every right to offer their clients the opportunity to bring in a private blood donor.

While they’re still battling against the hospitals and medical establishments in European countries, the first SafeBlood donation actually occurred in the United States recently, which was very exciting for the team, as two unvaccinated members found each other thanks to the SafeBlood database.

SafeBlood is building a community of people who can connect with each other to maintain their rights and control over their own medical choices. In a world that’s increasingly ceded controls of health to pharmaceutical and institutional behemoths, holding on to our health freedom rights anywhere we can is crucial.

Below is a full list of locations that currently have SafeBlood members in the database.

Spread the love
This DailyClout article is the writer’s opinion.
One of our country’s most important freedoms is that of free speech.
Agree with this essay? Disagree? Join the debate by writing to DailyClout HERE.
Spread the love
Previous Story‘Time to Awaken’: Mindfulness Expert Ora Nadrich Explains Spiritual Aspect of Current Crisis
Next StoryAn Excerpt From Dr. Naomi Wolf’s The Bodies of Others