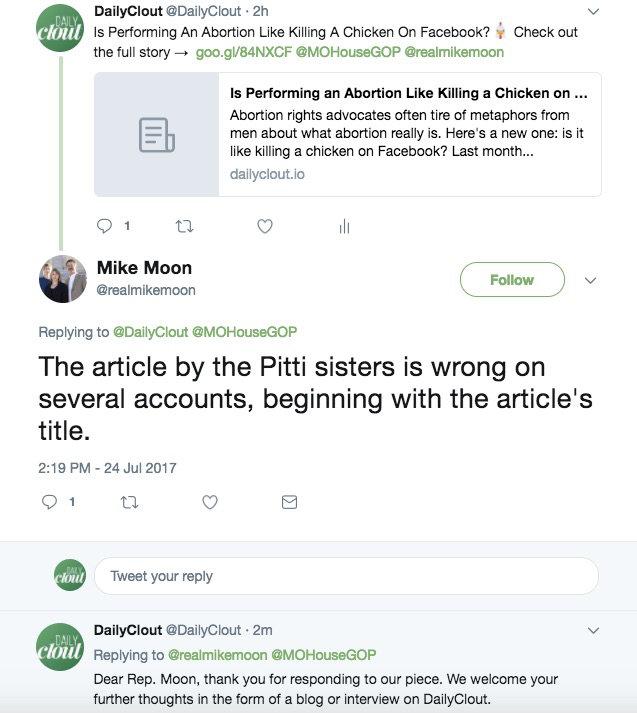 Yesterday, Representative Mike Moon (R-MO) responded directly to a DailyClout opinion piece about his abortion bill, HB-1014, the Never Again Act. It would put a display of abortion processes and instruments in a section of the Missouri Historical Museum, next to the section on slavery.

Last week, DailyClout had reported on Rep. Moon, who had also live-streamed himself on Facebook, decapitating and gutting a live chicken. His caption read: “Let’s protect the lives of the innocent and end abortion”, which lead many to see the slaughter as a comparison to a common abortion procedure.

Anjali and Bhavani Pitti’s option piece on DailyClout, which was reposted on Mogul — a site for millennial women that has a global reach of eighteen million readers — described what actually happens when a woman gets an abortion, in response to the question raised by Rep. Moon: is a first-trimester abortion factually comparable to the beheading of a live chicken? The article contained a BillCam embed, which shows readers the actual bill.

We tweeted the link to the article at Rep. Moon, who responded within an hour, expressing his disagreement with Anjali and Bhavani’s piece: DailyClout is a nonpartisan platform for civic discussion and action. We welcome Rep. Moon to write a response to the Pitti piece, and are delighted to invite Rep. Moon for an exclusive interview with DailyClout. He is welcome to come to our space at Civic Hall in New York, or we can interview him over Skype. We can also publish his response anytime in the form of a blog post. Rep. Moon, have your say directly on DailyClout!

Rep. Moon, have your say directly on DailyClout!