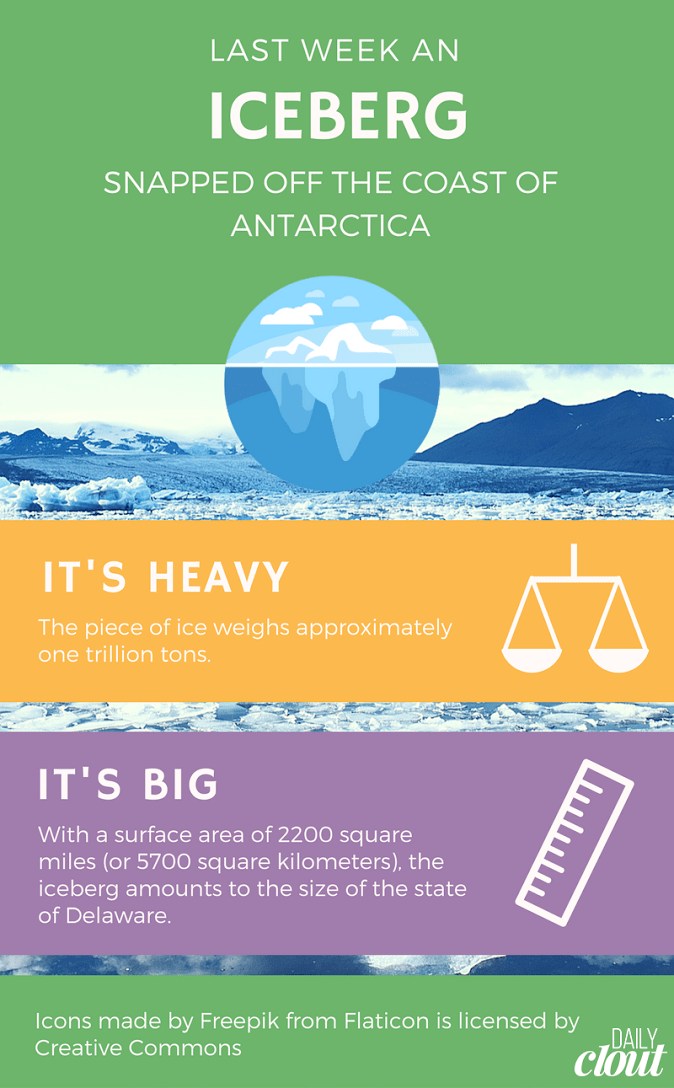 The world is heating up dramatically — even as the Center for Public Integrity reports that “Fossil fuel giants spent millions on lobbying, inauguration during early 2017.”

Last week also, an iceberg off the coast of Antarctica — snapped. This thing is huge — one of the largest icebergs ever observed. The piece of ice weighs approximately one trillion tons. With a surface area of 2200 square miles (or 5700 square kilometers), the iceberg is as big as the entire size of the state of Delaware, or the Indonesian island of Bali. It has twice the volume of Lake Erie!

Scientists at the University of Swansea reported that the iceberg calved away from the Larsen C Ice Shelf in Antarctica. The Larsen Ice Shelf is located in the north-west of the Antarctic coast — in an area called the Weddell Sea — and had already been demonstrating signs of instability in the past.

A NASA Aqua satellite instrument detected the final break-off on July 12 — NASA has been expecting the breakout for some time. The iceberg’s name is A68. The calving of A68 has no immediate effects on sea levels, as it had already been floating free, prior to breaking completely off of the Antarctic continent. As of now, the iceberg is mainly a danger to mariners who sailing in the South Atlantic, which is where the iceberg is most likely to be carried by currents, as researchers at MIDAS, a UK-based Antarctic research project, predict. That may change because, just this week, A-68 broke into 3 smaller segments.

One massive berg no longer, as #A68 breaks up into 3 large & several smaller bergs, while distancing further from the #LarsenC ice shelf. pic.twitter.com/59VQziDms4

As for the Larsen Ice Shelf Investigations show that the larger “mother” shelf will regrow slowly, but it still poses a risk of becoming significantly unstable. Other ice shelves nearby may also collapse, which would, in turn, indeed raise sea levels, as large amounts of ice would then fall into the waters

National Geographic’s Senior Environment Editor explains the process of seas glacial melting such as this: warmer water in the Arctic sea — that is, water with temperatures just over freezing — melts, and weakens the ice structures from the bottom. This essentially undermines the ice structures, causing the icy land to fall apart. All over Antarctica, floating ice shelves have caused loss of stable ice, and this loss of ice has increased by a factor of twelve over the past twenty years.

New satellite observations, as the BBC reports, show that the gap between Antarctica and the Larsen C iceberg is actually widening further. Also, an additional, thinner piece of ice has separated from the larger ice block now as well, and is itself floating off rapidly. With trillion-ton ice structures getting dislodged and floating off, due to a rise in water temperatures in what has been the coldest place on Earth, we may be reconsidering the severity of the situation in which our planet is in.

As evidenced by DailyClout’s Billcam, bills have recently been introduced to regulate climate change policies. For example, Maryland Democrat Senator Ben Cardin sponsored an act to urge the United States to work in cooperation with the international community in relation to climate change. Check it out here: