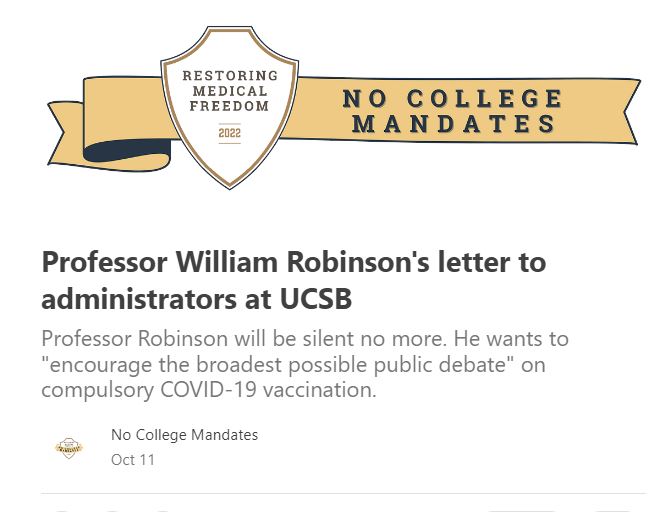 Professor Robinson will be silent no more.

He wants to “encourage the broadest possible public debate”

I am a professor at the University of California at Santa Barbara (UCSB). On October 2nd, I sent a letter to administrators in response to an announcement that recently mandated that all faculty, staff, and students must get a new booster this fall.  In addition, the administrators responsible for Covid policy changed the language from “fully vaccinated” to “up to date”, suggesting we will be mandated to get a new booster every quarter or every season in perpetuity.  At UCSB, in academia, and beyond we have not been allowed to have an open debate on the vaccine mandates much less any democratic input into whether vaccines and boosters should be mandated (for example, at our quarterly Academic Senate legislative meetings, which are supposed to involve open debate, discussion, and voting, those running the meeting have not allowed an open mic, which runs counter to all historic practice and procedures).  Anyone who has questioned the official narrative on covid has been ridiculed and censored, accused of being “anti-vaxxers”, “anti-science,” “conspiracy theorists”, and “right wing nuts”.  When one points to sound scientific information that contravenes the official narrative it is labeled “misinformation”.

I restricted the letter to three main concerns with regard to health.  But there are other issues I omitted that are matters for a larger discussion, such as the interest that the pharmaceutical corporations have in assuring vaccination in perpetuity in order to assure an endless profit stream, and the profound influence Big Pharma has on our governmental agencies, in particular, on the CDC, the FDA, and the NIH (this is know as “agency capture”).  There are many conflicts of interest.  The President of the University of California sits on the board of Amgen, a giant biotechnology pharmaceutical company that is developing covid drugs.  I have tried to ascertain the extent to which Pfizer and others fund research at the University of California.  The virus is deadly for certain demographics (science tells us exactly who the groups at risk are) and this has made it easier for those controlling the covid narrative to whip up fear in order to compel docile obedience rather than democratic debate and decision making based on science.

I have kept quiet until now, but no longer.  I now want to encourage the broadest possible public debate on this vital matter of our day.  I sent the letter that appears below to the handful of university administrators who have imposed the new booster mandate.  I have not yet received a reply.

I am writing to register my deep concern over the September 22 memorandum that extends the COVID vaccine mandate to require a new booster for fall 2022.  I am particularly troubled with regard to three matters. First, the vaccine mandate was originally justified under the assumption that vaccination would protect against infection and would prevent transmission of the virus.  We now know that the vaccines neither protect against new infections and nor do they prevent transmission.  Second, we now have substantial evidence that there are serious health risks associated with vaccination, and with some demographics, such as healthy individuals aged 18-39, the risks may outweigh any benefit.  Third, I am deeply disturbed by the coercive nature of the mandate for drugs that remain experimental and that have yet to be adequately tested on human subjects.

Please note that I do not object to vaccination but to the compulsory nature of this medical procedure.  Any medical procedure must be an individual choice made in consultation with one’s physician.  Those of us who oppose vaccine mandates have been accused of being “anti-vaxxers,” “anti-science,” or “conspiracy theorists,” none of which are true.  My position is driven by science, by the scientific information on the virus and on the vaccines that we have now accumulated nearly three years into the outbreak.  Let me run through the three concerns.

FIRST, we now know for certain that vaccination neither protects against infection nor prevents transmission.  This is not in dispute and has been acknowledged by the CDC, the FDA, the HHS, and the WTO (e.g., see here: https://www.cdc.gov/coronavirus/2019-ncov/vaccines/effectiveness/why-measure-effectiveness/breakthrough-cases.html), as well as by health ministries and medical researchers around the world.   Moreover, over time, COVID-19 vaccination appears to increase the risk of contracting other variants, rendering individuals who have taken additional booster doses more likely to become ill and to spread the virus (see e.g. this study by the British Medical Journal: https://www.bmj.com/content/377/bmj.o1506).   The original justification for mandating vaccination therefore no longer exists.  I point out as well that the CDC has “recommended” and not mandated the new booster.  The University’s decision to mandate boosters at this time is therefore not in accordance with CDC guidelines.  Moreover, the CDC recently greatly relaxed its COVID guidelines and no longer recommends making distinctions based on a person’s vaccination status.

I am particularly concerned about the elevated risk of myocarditis and increased emergency cardiovascular events among those under 40 years old, a demographic that would include the vast majority of our student body as well as significant portions of staff and faculty.  Here, for instance, is a link (https://papers.ssrn.com/sol3/papers.cfm?abstract_id=4206070) to one study by medical researchers (including one of our colleagues at UCSF) that shows 22,000-30,000 previously uninfected adults aged 18-29 must be boosted with an mRNA vaccine to prevent just one COVID hospitalization, and that “we find that booster mandates may cause a net expected harm: per COVID-19 hospitalization prevented in previously uninfected young adults, we anticipate 18 to 98 serious adverse events, including 1.7 to 3.0 booster-associated myocarditis cases in males, and 1,373 to 3,234 cases of grade ≥3 reactogenicity.”  Note here as well that the data shows that young healthy people who contract the virus have a recovery rate of 99.995 percent.

This is not an isolated study.  Nearly three years into the COVID outbreak, we now have a wealth of such scientific studies that identify the risks involved in contracting the virus itself and in vaccination that are readily available to the public, yourselves included.  Note that the CDC’s own VAERS data released on July 15, 2022, show 1,350,950 reports of adverse events from all age groups following COVID vaccines, including 29,635 deaths and 246,676 serious injuries between December 14, 2020, and July 1, 2022. Of the 29,273 reported deaths, 19,150 cases are attributed to Pfizer’s COVID vaccine, 7,850 cases to Moderna, and 2,577 cases to Johnson & Johnson (J&J).  Of the total 13,705 reported deaths in the U.S. as of July 15th, 7 percent occurred within 24 hours of vaccination, 15 percent occurred within 48 hours of vaccination, and 54 percent occurred in people who experienced an onset of symptoms within 48 hours of vaccination. Notably, it is well documented that fewer than one percent of all adverse events are ever reported to the CDC’s VAERS, which means that the number of those individuals who have been injured or have died is even greater (see for instance this summary of an HHS-funded Harvard Medical School vaccine injury study):

THIRD, in distinction to the original vaccines that received emergency use approval after initial clinical trials on humans – these trials were seriously compromised, but that is a moot point now – the new Pfizer/BioNTech booster was not only not tested on human subjects, but according to Pfizer’s own preliminary findings that were presented for emergency use authorization, it was only tested on a total of eight mice.  Here is the link to Pfizer’s report: https://www.fda.gov/media/159496/download.

Never before in medical history has a whole population group been forced to get a vaccine approved for emergency use authorization, in this case an experimental gene therapy vaccine that involves hundreds of risks and for which we have no long-term data.  There have been cases in the past in which drugs were granted emergency use authorization before the completion of stage three trials that determined risks.  But these were vaccines that people could receive voluntarily not compulsory.  Informed consent is a matter of law and ethics, both of which establish that no one can be coerced into a medical procedure. Now, the University is mandating a booster that, unlike the original vaccine, has not even been tested on a human being.  Never before in medical history has such a thing occurred.

The University should take into account that the LAUSD (among other school districts) suspended its vaccine mandate for students and staff in September after a Superior Court judge ruled that the school district did not have the authority to mandate vaccination, that only the state has that authority.  The state of California has not mandated booster vaccination for anyone except health workers.  Nationwide, there is a trend towards eliminating mandates, especially now that the rate of hospitalizations is radically down and COVID-related deaths now appear to be about at par with annual deaths from the flu (see https://covid19.ca.gov/state-dashboard/, https://www.cdc.gov/nchs/pressroom/sosmap/flu_pneumonia_mortality/flu_pneumonia.htm).

For the reasons discussed above, I respectfully call on you to withdraw the policy of compulsory vaccination.

Spread the love
This DailyClout article is the writer’s opinion.
One of our country’s most important freedoms is that of free speech.
Agree with this essay? Disagree? Join the debate by writing to DailyClout HERE.
Spread the love
Previous StoryMarriage: A Contract That Should be a Sacrament
Next StoryFDA Just Approved Kids Covid Booster — with ZERO Testing!