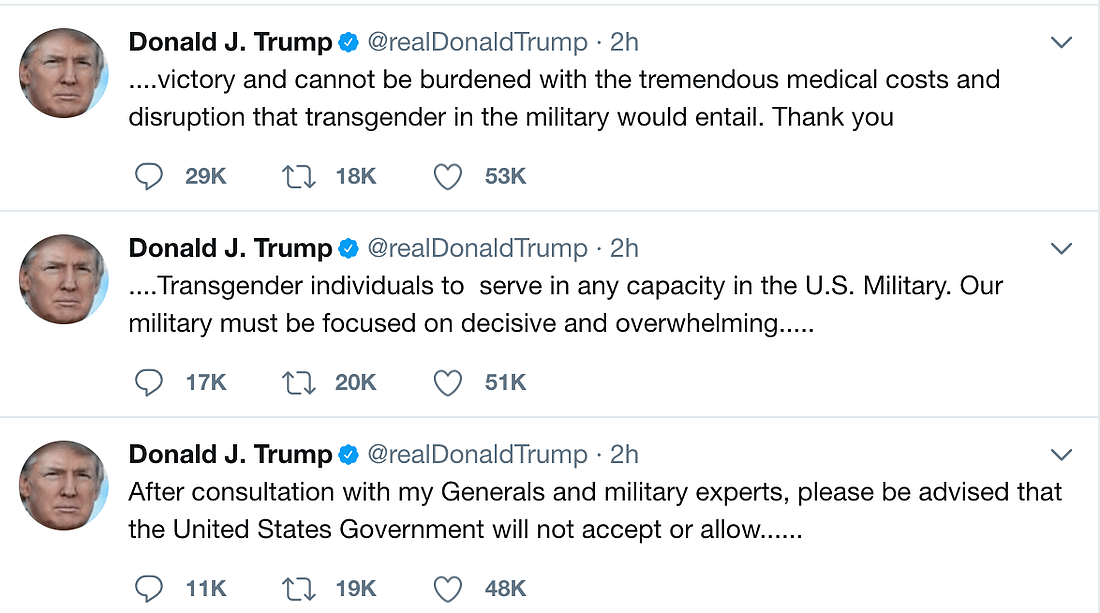 Early Wednesday morning, President Trump announced via Twitter a ban on all transgender individuals from serving in the military. He attributed this change in policy to “tremendous medical costs.”

Fact-checking this premise, some asked the Pentagon to clarify how many transgender soldiers and officers there indeed were. The Pentagon refused to release an official statement on the number of transgender individuals currently serving. However, a 2016 Rand survey stated that there are one thousand three hundred-twenty and six thousand six hundred-thirty transgender personnel serving in the active component of the military. So this is not an insignificant population.

The Rand survey also highlights the fact that there would be no significant impact, in the report’s conclusions, on “unit cohesion or operational readiness” by having transgender individuals serve in the military.

Furthermore, the study asserts that there is not in fact a “tremendous cost” associated with gender reassignment surgery. The Rand survey mentions that providing transgender-related services accounts for only up to 0.004-0.017% of the Defense department’s total health care spending. Many see this statement as a major blow to the LGBTQ community — one that President Trump had promised to support in his 2016 Presidential campaign.

Officials in the US Government have been considering the topic since President Trump began his term. Secretary of Defense General Jim Mattis had previously delayed in early July, by six months, the execution of the ban against transgender individuals in the military. This delay was issued in order for the military chiefs to assess how allowing transgender individuals in the military would affect the “readiness and lethality” of the force. The deadline for the assessment was set for December 2017. Some see President Trump’s announcement as one that disregards Mattis’s order, especially since the President made the announcement while Defense Secretary Mattis was on vacation. Supporters maintain that this shows decisive action.

The unexpected statement faced a backlash on Twitter: “Any American who meets current medical and readiness standards should be allowed to continue serving,” stated Sen. John McCain on Twitter. Sen. McCain believes that Pres. Trump’s announcement was “unclear.” Though the majority of the comments on Twitter showed a strong support for transgender individuals, a significant number of commentators seemed to believe that the presence of these individuals in the military would cause negative impacts. A study conducted by Rasmussen Reports in early 2017 showed that twenty-three percent of voters think that openly transgender people are good for the military, whereas thirty-one percent think that their presence would have a negative impact instead. However, the largest number of voters, around thirty-eight percent, believed that having an LGBT-inclusive military would not negatively impact military service.

Pres. Trump’s tweets came as a surprise to the Pentagon, who referred all questions to the White House: “We will continue to work closely with the White House to address the new guidance provided by the Commander-in-Chief on transgender individuals serving the military,” said Jeff Davis, a Pentagon spokesperson, without going into further detail.

The announcement doesn’t state what will happen to the transgender individuals who are already actively serving. Although it is unclear whether President Trump will stick with his decision or go back on it, it is certain that his statement gave rise to a contentious national discussion on the role and value of transgender servicemen and women.