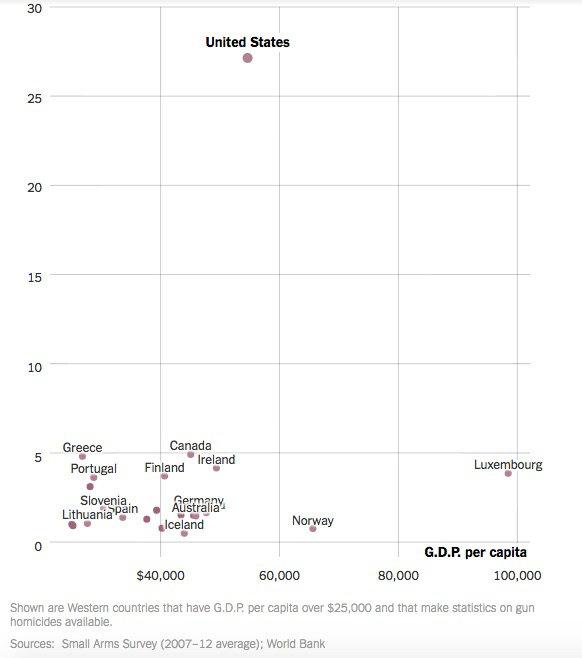 On June 30th, there was a shooting at the Bronx-Lebanon Hospital Center in New York. The attack resulted in the death of one person – a doctor named Tracy Tam – and the wounding of six others, and, finally, in the death of the shooter himself through an act of suicide.

The culprit has been identified as former doctor at Bronx-Lebanon Hospital Center, Henry Bello. After quitting his work at the hospital in response to accusations of sexual harassment, Bello returned two months later, opened fire on doctors and medical students with an AM-15 rifle. According to the gunman’s statements, this was an act of retribution. Bello sent an email to The New York Daily News that the hospital had “terminated my road to a licensure to practice medicine”.

The damage could have been more severe, but luckily, the shooting occurred in a hospital, a place equipped to heal people. Victims of similar mass shooting attempts haven’t been so lucky. There have been a whopping ninety-one mass shootings in 2017, according to the Daily Dot. One can’t help but wonder what can be done. Many jump to ideological conclusions when talking about this issue. But first, we should look at the state of gun laws — we’ll begin with New York’s laws, and what those laws did (or didn’t do) to stop Bellow’s attack of revenge.

The reality is, Dr. Bello was able to acquire a weapon even with an extensive criminal record. Bello had been arrested in the past, for instance for repeated sexual abuse, turnstile jumping and public urination. These acts, however, only counted as misdemeanors, not as full-on felonies. Two weeks prior to the incident, the shooter was able to purchase a military-style rifle in Upstate Guns and Ammo, a firearms shop in Schenectady, New York. Because he had only misdemeanor offenses, he passed a Federal background check.

According to the New York Times, New York State arguably has among the strictest gun laws in the country. Gun laws in New York are among some of the strictest in the country, especially following the state legislator’s passage of the SAFE Act of 2013. But what exactly does it take to be able to own a gun in the Empire State?

The rules vary according to the type of weapon in question. For example, the acquisition or ownership of hunting firearms such as rifles and shotguns is only truly regulated in New York City — outside of NYC, one does not even need to have a permit in order to purchase rifles and shotguns! Registration, licensing of ownership, and a permit to carry or conceal are requirements only necessary in New York City.

For handguns, however, all three factors — registration, licensing of ownership, and a permit to carry or conceal — must be fulfilled, and this is not an easy feat.

According to the gun law database at gun.laws.com, it takes four to six months to acquire a handgun license, which will allow ownership and possession of a handgun. First, the applicant must go to his or her local police department and undergo a background check and fingerprinting. Then, the New York State Police Department receives the application and asks for personal references, which include family members and close friends. These references need to confirm the applicant’s good moral character.

Handguns and pistols must additionally be registered — failure to do so can result in felony charges.

Other states with strict gun laws include Hawaii, Massachusetts, Connecticut, Rhode Island, and New Jersey, and they are among the states with the lowest rate of gun-related deaths. States with the most gun-related deaths include Wyoming, Arkansas, Alabama, Mississippi, Louisiana, and Alaska. These states do not require an open carry permit, in contrast, to states like New York and Hawaii. Also, they do not require handgun owners to register or report their guns, do not conduct background checks, do not require a license in order to purchase a handgun, and do not implement a waiting period between the point of purchase and delivery of the weapon. It is obvious that the stricter the gun laws, the less gun-related deaths occur in the United States.

However strict U.S. gun laws might be, perhaps they are not strong enough. Research indicates that the states with the tightest gun laws have the lowest number of gun-related deaths. But when looking at the United States as a whole, the country has an outlandishly high number of gun-related deaths in comparison to other developed democracies. The New York Times reports that in Poland and England, about one in every one million people die due to gun homicide every year, and in Germany, two in a million. Yet in the United States, the death rate is substantially higher: around thirty-one people per million people die from gun-related crime every year, which translates to twenty-seven people shot dead every single day. Even if attacks such as the one in Paris in November 2015 were to happen in France every month, France’s gun-related death rate would still be lower than that in the United States!

The Small Arms Survey composed an infographic that demonstrates this freakish state our country is in: What do you think is the answer to our problem with gun violence – do we need more education related to the safe use of guns? Should we advocate for even stricter laws, or perhaps the outlawing of assault weapons?

Spread the love
more
This DailyClout article is the writer’s opinion.
One of our country’s most important freedoms is that of free speech.
Agree with this essay? Disagree? Join the debate by writing to DailyClout HERE.
Spread the love
more
Previous StoryWant to See the Secretive Intelligence Authorization Act for Fiscal Year 2018?
Next StoryPres. Trump Bans Transgender Individuals From U.S. Military