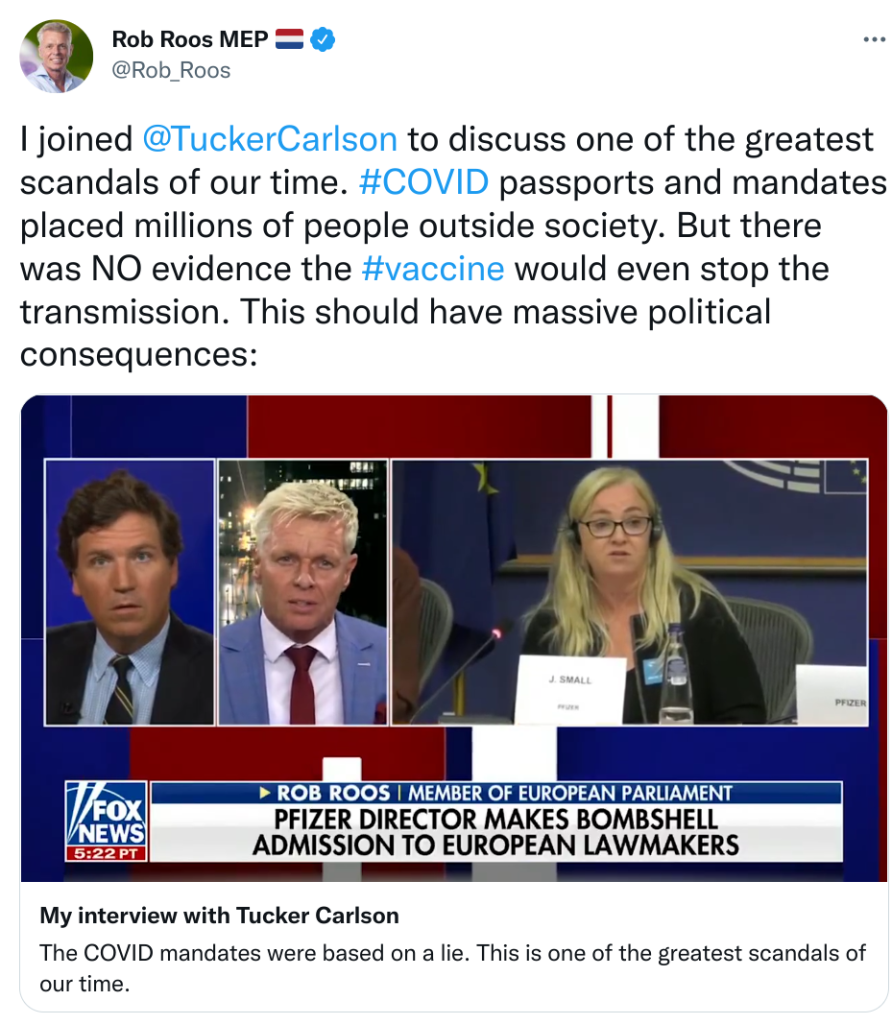 The name MEP Rob Roos exploded into online discourse yesterday. MEP Rob Roos is a Member of the European Parliament from the Netherlands. He sits on numerous committees, including the Special Committee on the COVID-19 Pandemic: Lessons Learned and Recommendations for the Future. Mr. Roos has been relentlessly pursuing answers and accountability from those responsible for decisions made on behalf of citizens everywhere throughout the pandemic.

He finally got a huge breakthrough this week when his committee had the opportunity to question Pfizer representatives in Parliament. Mr. Roos asked a Pfizer director a very clear question, in English to avoid any confusion.

“Was the Pfizer Covid vaccine tested on stopping the transmission of the virus before it entered the market? If not, please say it clearly. If yes, are you willing to share the data with this committee? And I really want a straight answer, yes or no? I’m really looking forward to it.”

Janine Small is the President of International Developed Markets at Pfizer. She was sitting in for CEO Albert Bourla, who canceled his planned appearance at the committee hearing earlier this month. 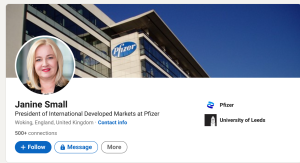 Ms. Small responded with an answer that sent shockwaves throughout the world.

“Regarding the question around did we know about stopping immunization before it entered the market?

Um, you know- No. We really had to move at the speed of science to really understand what is taking place in the market”

This is an admission that has the potential to create serious progress on the path to answers and accountability. Of course, millions of people were coerced, forced, or mandated to receive this vaccine on the basis that they had to “do their part to protect others”. Segregation of society, discrimination against the unvaccinated, and the widespread disgraceful “Green Passports” were all inexcusable beyond words, and the perpetrators of those practices must face accountability for the destruction they’ve wrought on society.

Mr. Roos appeared on Tucker Carlson following the viral moment that exposed the widespread institutional discrimination against the unvaccinated as wildly unjustified.

Hopefully, this will facilitate a serious change in the mainstream conversation.

Spread the love
This DailyClout article is the writer’s opinion.
One of our country’s most important freedoms is that of free speech.
Agree with this essay? Disagree? Join the debate by writing to DailyClout HERE.
Spread the love
Previous StoryHow to Use the Abstractor Tool to Search Pfizer Documents and Data
Next StoryBREAKING: OfCom, a UK Media Watchdog, Opens an “Investigation” into GB News Segment Featuring Dr. Naomi Wolf