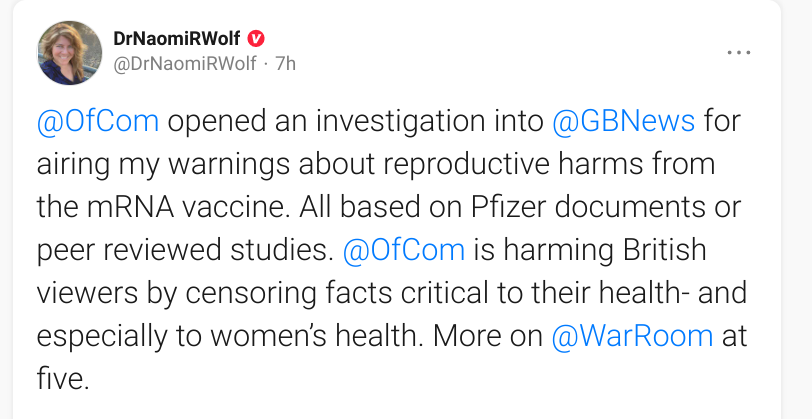 On October 4, just over one week ago, Dr. Naomi Wolf appeared on Mark Steyn’s program on GB News. As she often does, she presented her experience of detecting early warning signals about the mass Covid vaccine rollout and the subsequent chaos that engulfed her due to publicly discussing those signals. Dr. Wolf explained that she was targeted by CDC and the White House for accurately warning that women were experiencing menstrual symptoms post mRNA vaccination. They colluded with Twitter to actively censor Dr. Wolf from platforms they could control.

Dr. Wolf also discussed news that the 3,500 Warroom/DailyClout Pfizer Documents Research Volunteers which includes physicians, RNs, biostatisticians, lab clinicians, and research scientists have broken from their efforts researching the Pfizer documents that were forcibly released by court order earlier this year. Those findings include damage done by the vaccines to organs throughout the body, with an emphasis on disruptions to the reproductive systems in both men and women.

Credit to Mark Steyn, who absolutely does not shy away from difficult or controversial topics, but unfortunately his integrity comes at a price.

OfCom is a government-approved regulation authority that oversees broadcasting, telecommunications, and postal industries in the UK. They claim to be independent of the government. From their website:

Today, OfCom announced that they are investigating Mark Steyn for the interview he did with Dr. Naomi Wolf.

The Guardian published an article about the investigation and included unfounded negative remarks about Dr. Wolf that have been repeated often by the Pharma-captured media industry but have no basis in reality.

Dr. Wolf’s official response to the “media watchdogs” is as follows:

Dr. Naomi Wolf’s mRNA COVID vaccine-related claims are based on the work of the War Room/DailyClout Pfizer Documents Analysis Project Volunteers, a group of approximately 3500 medical and scientific experts; their forty plus reports cite the internal Pfizer documents, in the custody of the FDA, released under court order, as well as NIH and other peer-reviewed studies. Some examples of their and other reports related to fertility harms are as follows:

https://dailyclout.io/pfizer-fda-cdc-hid-proven-harms-to-male-sperm-quality-testes-function-from-mrna-vaccine-ingredients/ (Entire report is important. Note, in particular, the section on anti-sperm antibodies.)

The Media is Harming People

Media watchdogs such as OfCom claim to exist in order to protect the viewers. Dr. Wolf has accurately reported on menstrual harms, elevated rates of stillbirths, and miscarriages all over the world, with governments such as Scotland opening investigations into high spikes of babies who were born dead in the past year.

If OfCom and The Guardian are so intent on an “investigation” into Mark Steyn, Dr. Naomi Wolf, and her claims, then we should call on them to do just that, and investigate thoroughly, every one of Dr. Wolf and the Warroom/DailyClout team’s 40 reports about the horrors that the mass vaccination program has unleashed on humanity. These are reports that come directly from the Pfizer documents that were released under a court order earlier this year. Let them investigate those with a fine-tooth comb, and then do what they’re actually tasked with, and that’s journalism, and protecting journalism. Citizens don’t need to be protected from journalism, journalism needs to be fiercely protected by the people.

This is an outrage.

Spread the love
This DailyClout article is the writer’s opinion.
One of our country’s most important freedoms is that of free speech.
Agree with this essay? Disagree? Join the debate by writing to DailyClout HERE.
Spread the love
Previous StoryPfizer Director Makes Shocking Admission
Next StoryWho Has Been Teaching Humans to Make Terrible Decisions Related to COVID-19?