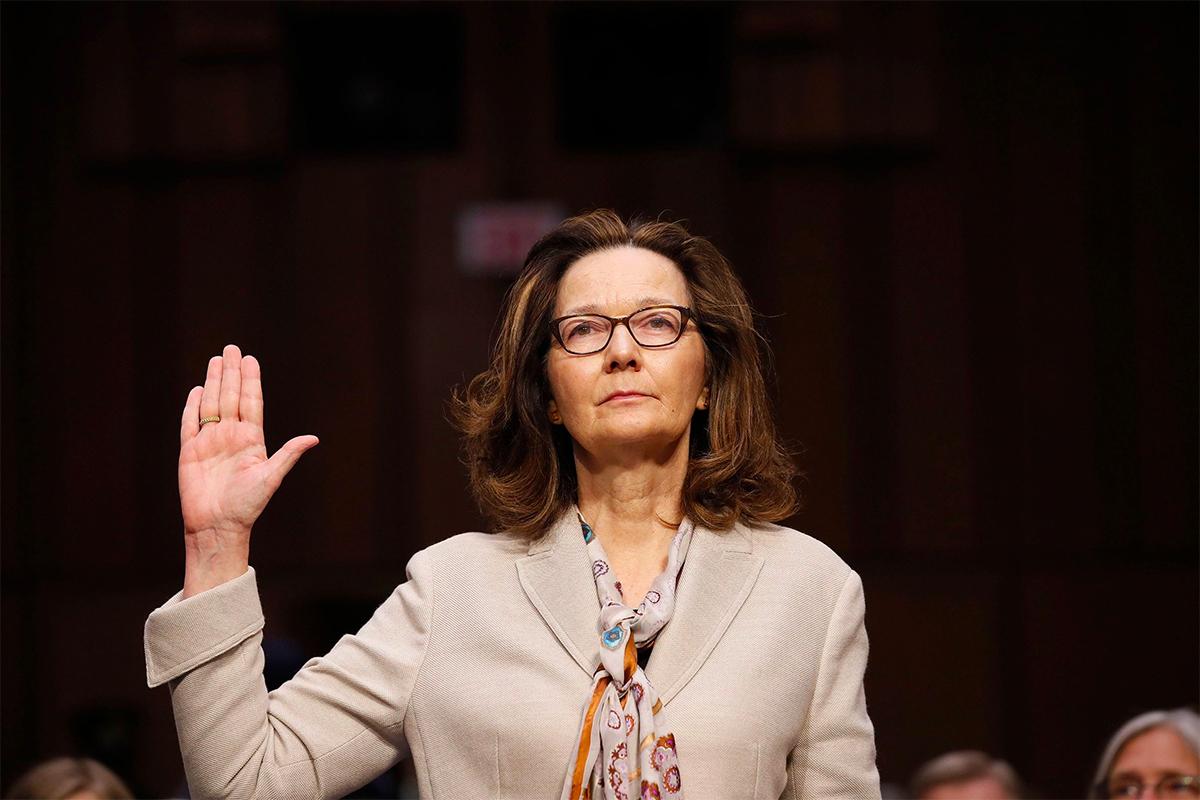 The Senate Intelligence Committee voted 10-5 to support Gina Haspel’s nomination today, despite the fact that her facilitation of torture should disqualify her from assuming the role of CIA director.

Next the full Senate will make a final decision on Haspel’s nomination in a vote that is expected to take place next week but could occur as early as tomorrow.

In her testimony before the Senate Intelligence Committee on May 9, Haspel insisted that the CIA’s interrogation program during the Bush administration was legal. Haspel, a 33-year CIA veteran, argued that it could not be determined whether torture was effective to gain intelligence. She refused to state categorically that torture is immoral. And she never condemned the torture program in which she participated.

Haspel was chief of base at the secret CIA black site in Thailand when al-Qaeda suspects, including Abd al-Rahim al-Nashiri, were waterboarded and brutalized in 2002. Ten years later, Sondra Crosby said al-Nashiri was “one of the most severely traumatized individuals I have ever seen.”

Waterboarding involves pouring water into prisoners’ noses and mouths to make them feel like they’re drowning.

The Bush administration claimed it only waterboarded three individuals: al-Nashiri, Abu Zubaydah and Khalid Sheikh Mohammed. But a footnote in a memo written by Office of Legal Counsel lawyer Steven Bradbury says waterboarding was utilized “with far greater frequency than initially indicated” and with “large volumes of water” rather than small quantities, as required by the CIA’s rules.

Waterboarding is illegal under all circumstances.

The Bush Torture Program Was Unlawful

US law has long considered waterboarding to be torture, which constitutes a war crime. After World War II, the US government tried, convicted and hanged Japanese military leaders for the war crime of waterboarding.

“No exceptional circumstances whatsoever, whether a state of war or a threat of war, internal political instability or any other public emergency, may be invoked as a justification for torture,” the Convention Against Torture states unequivocally.

Last week, however, Haspel testified that the CIA’s actions in the Bush administration’s “enhanced interrogation” program were lawful. “The very important thing to know about CIA is, we follow the law,” she said. “We followed the law then, and we follow the law now.”

She was likely relying on memoranda written by lawyers in the Office of Legal Counsel, including John Yoo and Jay Bybee. Yoo and Bybee wrote memos with twisted reasoning purporting to justify torture, and advised high government officials on how to avoid criminal liability under the US War Crimes Act.

That makes Cheney — along with George W. Bush and other officials who authorized the torture — liable for war crimes. But since Barack Obama refused to hold the Bush war criminals accountable, Cheney continues to advocate torture with impunity.

The Senate Select Committee on Intelligence released a 499-page executive summary of its 6,700-page classified torture report in 2014. It contains many disturbing revelations. The summary says several detainees were waterboarded. One detainee in CIA custody was waterboarded 183 times; another was subjected to the waterboard on 83 occasions.

Al-Nashiri was waterboarded on Haspel’s watch. A rag was placed over his forehead and eyes and water was poured into his nose and mouth until he began to choke and aspirate. The rag was lowered, suffocating him with the water still in his throat, sinuses and lungs. After he was allowed to take three to four breaths, the process was repeated.

A broomstick was wedged behind Al-Nashiri’s knees as he knelt and his body was forced backward, pulling his knee joints apart. CIA agents also cinched his elbows behind his back and hoisted him up to the ceiling, causing a physician’s assistant to fear they had dislocated his shoulders.

Al-Nashiri was placed in a coffin between interrogations. At other times, he was locked into a small box the size of an office safe. Agents used a rolled towel placed around Al-Nashiri’s neck to swing him into a plywood wall, so the towel became an object of fear.

Agents instilled in Al-Nashiri “learned helplessness” to render him passive and dependent. To induce sleep deprivation, he was shackled to a bar on the ceiling and forced to stand with his arms above his head.

While hooded, naked and shackled to the ceiling, agents racked a handgun near Al-Nashiri’s head, then substituted a revved-up power drill.

Al-Nashiri was subjected to “rectal feeding.” A mixture of pureed hummus, pasta and sauce, nuts and raisins was rammed into his rectum. He was also forcibly sodomized and a stiff brush was raked across his “ass and balls and then his mouth.”

The summary confirmed the CIA used “rectal feeding” without medical necessity on prisoners, saying “rectal rehydration” was used to establish the interrogator’s “total control over the detainee.”

Other “enhanced interrogation techniques” that the summary documented included being slammed into walls; deprived of sleep — sometimes with forced standing — for up to seven and one-half days; forced to stand on broken limbs for hours on end; kept in total darkness; confined in a coffin-like box for 11 days; dressed in diapers; and bathed in ice water. The summary said one detainee “literally looked like a dog that had been kenneled.”

When Sen. Kamala Harris (D-California) asked Haspel, “Do you believe in hindsight that those techniques were immoral?” the nominee gave a non-responsive answer. Haspel said, “Senator, what I believe sitting here today is, I support the higher moral standard we have decided to hold ourselves to.”

Sen. Mark Warner (D-Virginia), vice-chairman of the committee, asked Haspel, “If this president asked you to do something that you find morally objectionable, even if there is an [Office of Legal Counsel] opinion, what will you do? Will you carry out that order or not?”

She replied, “Senator, my moral compass is strong. I would not allow CIA to undertake activity that I thought was immoral — even if it was technically legal,” Haspel explained.

Apparently Haspel has no moral objection to the torture techniques used on Al-Nashiri.

Sen. Susan Collins (R-Maine) inquired of Haspel, “If the CIA has a high-value terrorism suspect in its custody and the president gave you a direct order to waterboard that suspect, what would you do?”

Again, Haspel demurred with a non-responsive reply: “I do not believe the president would ask me to do that,” she testified.

Haspel is apparently unaware of Donald Trump’s declarations during the presidential campaign that he would “immediately” resume waterboarding and would “bring back a hell of a lot worse than waterboarding” because the United States has a “barbaric” enemy. Trump called waterboarding a “minor form” of interrogation.

Trump said he would allow the use of waterboarding “in a heartbeat” because “only a stupid person would say it doesn’t work.” But even “if it doesn’t work,” he added, “they deserve it anyway, for what they’re doing.”

When queried about Trump’s statement that “torture absolutely works,” Haspel said, “I don’t believe that torture works.” She then wavered, saying that valuable intelligence had been obtained from senior al-Qaeda operatives “and I don’t think it’s knowable whether interrogation techniques played a role in that.”

The executive summary of the Senate report came to a contrary conclusion.

“The use of the CIA’s interrogation techniques was not an effective means of obtaining accurate information or gaining detainee cooperation,” according to the summary. “Multiple CIA detainees fabricated information, resulting in faulty intelligence … on critical intelligence issues including the terrorist threats which the CIA identified as its highest priorities.”

But the CIA continually lied in saying that the techniques “saved lives,” the summary said.

Haspel confirmed that there were tapes documenting 92 interrogations of a detainee. Although she denied giving the order to destroy the tapes, Haspel acknowledged that in 2005, she drafted a cable from Jose Rodriguez ordering the destruction of the tapes. Rodriguez was chief of the CIA clandestine program and Haspel was his chief of staff.

When asked if she supported the destruction of tapes depicting waterboarding, Haspel said, “I absolutely was an advocate” of erasing the tapes, citing security concerns. She claimed to rely on consistent advice from counsel that there was no legal requirement to retain the tapes, provided that the treatment conformed to US law.

Bush’s legal mercenaries manipulated the law to conclude that the torture was lawful. The US Torture Statute defines torture as an “act intended to inflict severe physical or mental pain or suffering upon another person within his custody or physical control.”

Yet in an August 2002 memo signed by Bybee, Yoo redefined torture so narrowly the torturer would have to nearly kill the torturee in order to run afoul of the legal prohibition against torture. The memo stated that in order to constitute torture, the pain caused by an interrogation must include injury such as death, organ failure or serious impairment of body functions.

Yoo, a licensed attorney, made the astounding claim in an Esquire interview that “just because the statute says — that doesn’t mean you have to do it.” In a debate with Notre Dame Professor Doug Cassell, Yoo said there is no treaty that prohibits the president from torturing someone by crushing the testicles of the person’s child. It would be legal as long as the president acted with a proper motive, Yoo added, but he didn’t specify what that motive might be. Moreover, he ignored the absolute prohibition against torture enshrined in the Torture Convention.

And despite the Torture Convention’s categorical proscription against torture in all circumstances, Yoo wrote that self-defense or necessity could be defenses to war crimes prosecutions.

Haspel’s Participation in Torture Disqualifies Her

Haspel testified that, if confirmed, she would not allow torture. But she never admitted that Bush’s interrogation program included torture.

She denied participating in the creation of the CIA detention and interrogation program, claiming she had no knowledge of it until the system had been operational for one year.

In spite of her insistence that the CIA acted legally in the Bush interrogation program, Haspel denied she would restart it. “Having served in that tumultuous time,” Haspel testified, “I can offer you my personal commitment, clearly and without reservation, that under my leadership, CIA will not restart such a detention and interrogation program.”

Senator Warner affirmed that Haspel is “among the most experienced people to be nominated” for CIA director. But, he added, “many people — and I include myself in that number — have questions about the message the Senate would be sending by confirming someone for this position who served as a supervisor in the counterterrorism center during the time of the [CIA’s] rendition, detention, and interrogation program.”

Warner changed his tune and pledged to support Haspel’s nomination after she wrote him a letter stating, “the enhanced interrogation program is not one the CIA should have undertaken.” But Haspel wrote that in the context of protecting the CIA’s reputation, not out of any moral or legal concern about the torture.

In a written statement, Sen. John McCain (R-Arizona) urged the Senate to reject Haspel’s nomination. “Ms. Haspel’s role in overseeing the use of torture by Americans is disturbing. Her refusal to acknowledge torture’s immorality is disqualifying,” McCain wrote.

Obama ensured the impunity of Bush officials for their war crimes. Shortly before his inauguration, the president-elect declared, “My view is also that nobody’s above the law and, if there are clear instances of wrongdoing, that people should be prosecuted just like any ordinary citizen.” He added, however, that “generally speaking, I’m more interested in looking forward than I am in looking backwards.”

In fall 2016, the chief prosecutor of the International Criminal Court concluded there was a reasonable basis to open investigations into the war crime of torture in detention facilities run by the CIA and the US military in Afghanistan.

If Haspel is confirmed as CIA director, it will send a message to future administrations that those who authorize and facilitate torture will escape liability. That is a dangerous message indeed.