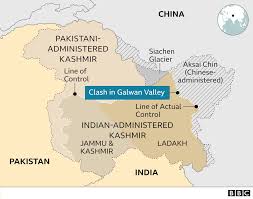 The Galwan Valley clash between India and China gave a rise to new issues between the two nations. As China violated the border rules and entered far into the Indian Territory, the latter had to give a befitting retort to the aggressors. Although both the nations fought and lost the lives of many soldiers, China has been really slow to agree or even affirm the number and the natures of its losses.

Months after, China did agree to pull back its troops from the disputed region and also accepted that it lost 4 troops during the deadly clashes last year. Rather than accepting its mistakes and taking charge of rectifying the errors made in past, the Chinese media has taken to other means to mask its own flaws.

Recently, after the curtain was lifted from how the Galwan valley clash affected the Chinese, the Chinese media has been extremely easy about slandering India and the Indian army.

Although much is known about China’s anti-India propaganda over social and official media, the news about the Galwan Valley clash whitewashes China’s involvement completely.

It’s a known fact that China entered the Indian Territory and captured the points that does not belong to it, not to mention the fact that the clash was bloody and China spared no opportunity to turn as violent as it possibly could against India. Around 20 Indian troops were killed as a consequence, however, the number of Chinese casualties was not known in the months following the clash since China refused to shed any light on the event.

It has always been difficult for China to accept its losses or weaknesses, whether it’s the effect of the pandemic in the nation or its conduct in Galwan Valley. Anybody who reports the truths from within China faces serious consequences, and it would not be wrong to say that their lives and safety is sometimes jeopardized.

However, a few days back China publicly released its side on the Galwan Valley clash. And as is expected out of China, their social media is teeming with anti-India propaganda, fake news, and sycophancy to a great degree.

Recordings of the violent conflict – first shared on March 5 through official social media handles – were shared across Chinese online platforms including the Twitter-like Weibo, WeChat, and Douyin, the local rendition of TikTok, on March 8.

The otherwise strictly censored online universe of China – which is so heftily monitored that any post or comment or activity that is seen to be unfit by the Chinese communist party does not see the light of the day, and is tracked down to locate the creator – has been packed with anti-Indiasentiments where the Indian armed force and its soldiers have been depicted as the villains of what happened at the LAC.

The Sino-India joint statement given late on Sunday night to report the culmination of disengagement of troops at Pangong lake didn’t stop the constant anti-India outbursts on the Chinese social media.

A Weibo user using the name Yuedingchengshu wrote: “Dusk arrives. Steamed rice in my bowl. Soft drink in my hand. Can’t fathom why sturdy soldiers die. I woke up in the middle of the night, startled to realize: They died for me.”

It’s astonishing to see that the Chinese social media, which is under the thumb of the Communist Party, being given so much freedom just to express their anger towards India, and to freely abuse the Indian army. It wouldn’t be surprising if there is any political involvement in whatever is happening online.

The netizens in China are making India sound like a bunch of perpetrators and are singing praises for the PLA, giving a shout-out to their generosity, saying that they have shown restraint against Indian soldiers despite being more powerful.

China showing morality over border disputes is nothing less than ironical. Despite what China has been sharing online in all its social media platforms, or the party-led newspapers, the truth is that China has always been a transgressor, if it’s not Ladakh then it’s Arunachal Pradesh, everywhere China has tried to take more than what belongs to it. Not to mention, that it has continuously discouraged any development activity initiated by India on the Indian side of the border.

Even amongst all the hate-speech that is ensuing against India on Chinese social media, the Chinese authorities have arrested at least three persons who had allegedly slandered the PLA troops online.

Details of their comments were not shared.

“The police stated that cyberspace is not a lawless void and the police will resolutely punish the behavior of slandering and insulting heroes without factual basis according to law,” an official Chinese military website reported.

“In recent years, the persons involved in defaming heroes and martyrs have received severe punishment, fully showing that the Chinese rule of law has zero-tolerance for similar words and deeds,” it added.

China seems to deliver on the freedom of speech only when it best suits its interests. In the dystopian society that China is, there is no space for denial and defiance. If you worship the CCP and believe that the sun comes out of its every orifice, you can ensure safety and sometimes stability for yourself. If not, then the CCP is akin to “Big Brother” from Orwell’s, 1984, it is always watching you, and hearing you; and will strike if a single wrong move is made.