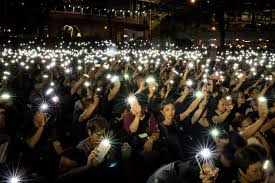 The Human Rights Watch, in its 2021 iteration of annual publication ‘World Report’, began its observation on China as ‘the Chinese government’s authoritarianism was on full display in 2020’. According to the report, the human rights movement in China suffered through its ‘darkest period’ since the ‘1989 massacre which marked the end of Tiananmen Square democracy movement’. It also enumerated fourteen categories to judge the status of Human rights in China, including Hong Kong protests, suppression of Tibet and Xinjiang, freedom of speech and faith, disability rights, etc. It has also attempted to contextualize them (in part) with respect to the COVID-19 pandemic. The contents of the report were also echoed by the Congressional Executive Commission on China (CECC) 2020 annual report, which went on to describe Chinese Government as having a “long arm of authoritarianism.”

In Hong Kong, the report remarks, over a million people had come on streets a start of the year 2020 to march peacefully for democracy. However several actions by Chinese government, such as the appointment of Luo Huining (who allegedly had no experience with Hong Kong) as its Chief representative in Hong Kong by virtue being an ‘enforcer’ of the Chinese Communist Party, interference in political processes of the autonomous territory of Hong Kong, systematic removal of pro-democracy legislators from important committees, bypassing the Legislative Council of Hong Kong to pass National Security Law (NSL), etc. have been great cause of alarm. NSL especially had gained notoriety, as it provided for sweeping power to police and denial of freedom to civil society and media, that was used against people who were pro-democracy. The press also was battered by Hong Kong police; in May 2020 several journalists were forced to kneel and had pepper sprayed on them. In similar vein, several pro-democracy protestors like Professor Benny Tai, newspaper editor Jimmy Lai (and his sons) were either removed from their jobs, or arrested without trial.

In Xinjiang and Tibet, restriction on religious freedoms and suppression on minorities had reportedly persisted throughout the year. The Chinese government continued to stamp down on cultural identity of the ethnic minorities, using ‘re-education camps’ in Xinjiang and “Nationality Unity Model Areas” in Tibet. These re-education camps in Xinjiang are masqueraded as ‘vocational schools’, where Uyghurs are forcefully kept with prison-like conditions. In NgawaTibetian region of Sichuan province, Yonten became 156th Tibetan to immolate himself in protest of Chinese suppression.

2020 also marked release of Karakax and Aksu list, which enumerated database of names and crimes of Uyghur, Kazakh and other Turkic minorities, for which they had been detained. These crimes included calling a family member living abroad, having four children instead of mandated three, etc. Aksu list gained further notoriety since it included arbitrary detentions based on Integrated Joint Operations Platform (IJOP), which uses big data and artificial intelligence to do ‘predictive policing’. This means that several people detained using IJOP had never committed a crime, but were taken into indefinite custody because they ‘did not socialize enough’ or ‘read Quran in mid-80s’. Many family members of the detained Uyghur do not come to know what happened to them for several years. Alarmingly, during the COVID – 19 pandemic, the Uyghur were forced to take only Chinese traditional medicine, chained those who violated lockdown measures, and relocated some of them to other provinces to work in factories as the Han Chinese therein had been evacuated.

The World Report 2021 also pointed out how China curtailed Human rights activism, freedom of expression and subverted freedom of religion. This is indicated to by arrest of Human rights lawyer Ding Jiaxi, and a nine-year prison sentence Christian pastor Wang Yi (who had been pastor to an ‘unregistered church’).

In August 2020, authorities shut down Bainu, a Mongolian-language social networking site when several people posted complaints about Mongolian being replaced by Mandarin as a medium of instruction. According to CECC report, authorities are slowly bringing in policies to restrict Islam (of the likes implemented in Xinjiang) to Ningxia autonomous region, which is home to the Hui muslims of China.

Authorities also detained and prosecuted citizens who had criticized the government or its individual leaders on social media, even if it were in private messages, using IT-based mass surveillance. According to the Canadian research group Citizen Lab, China’s prominent messaging app WeChat monitors content of users outside China as well. The arrests included prominent law professor Xu Zhangrun, and entrepreneur Ren Zhiqiang, latter of whom was given prison sentence for eighteen years. Zhiqiang had been one of the many critics of the way COVID – 19 crisis had been handled in China. China had initially curtailed information on the virus, thereafter telling its own people as well as the world that the virus did not have human transmission. When the pandemic started spreading in Wuhan, a complete lockdown was enforced without taking into account the impact it would have on people’s livelihood and well-being. People who tried to report on Wuhan, such as activist Zhang Zan and businessman Fang Bin, had also been detained.

The year 2020 had not been too optimistic for rights of women either. While National People’s Congress did introduce a Civil code that defined sexual harassment and stated that perpetrators can be held liable, it had not specified the execution mechanism for the code. Additionally, the law made it harder to get divorce, mandating a 30 day ‘cooling off’ period before finalizing divorce in case of couples who apply for divorce-through-agreement. Considering the fact that the law came close at heels of the COVID – 19 lockdown in China, which saw a multi-fold increase in domestic violence against women, this provision disproportionately endangers the women who file for divorce. The #MeToo movement saw similar silver linings; on one hand Bao Yuming, accused for rape of a minor, had been acquitted, while on other the activist Xianzi’s case had reached the top court.

Chinese disability rights and refugee issues also garnered attention. Only five students had access to Braille version of China’s university entrances, an exam attended by millions. Several disability rights activists were also tried by the Hunan court on ‘subversion charge’. China also continued to violate its obligations to the 1951 Refugee Convention, as it returned fleeing refugees from North Korea, despite the fact that they are brutally persecuted therein.

The significant violations of human rights carried by Chinese government, highlighted and even exacerbated by the COVID – 19 pandemic, is a great cause for alarm in the International community. With exception of sexual minorities and gender affirmation, where Chinese authorities did make some headway for better social environment, the Human Rights Watch report has revealed a glum picture, one of censorship, harassment, exploitation and restriction for sake of maintaining image of China that the Chinese Government wishes.