Naomi Wolf: FDA KNEW Vax Was a Failure and Dangerous 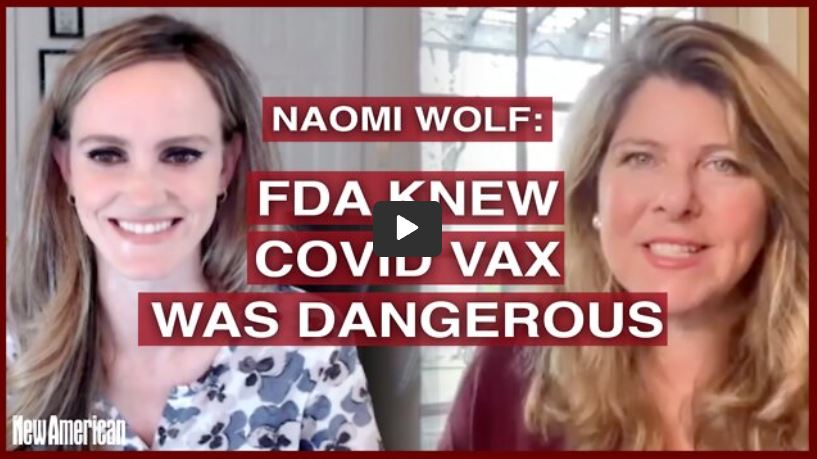 Dr. Naomi Wolf and her team of 2,500 volunteers specializing in medicine, medical fraud, biology, and law, are analyzing tens of thousands of pages of documents that the U.S. Food and Drug Administration (FDA) received from Pfizer to determine that their Covid shots were suitable for use in American adults.

The findings that Dr. Wolf shared are truly explosive. Apparently, the FDA was fully aware of both the lack of efficacy of the shot and all the terrible and side effects that they may cause. Those effects include but are not limited to heart damage in younger people and numerous neurological and reproductive issues in both men and women that ruin people’s lives. According to internal Pfizer documents, said Dr. Wolf, all of the outcomes associated with the shots were far from “mild” and “rare,” as Americans are led to believe, but shockingly severe and common. All of this is due to the toxic ingredients in each shot — mRNA, spike protein, and lipid nanoparticles — that end up in various organs in the human body.

According to her bio, Dr. Naomi Wolf is a bestselling author, columnist, and professor; she is a graduate of Yale University and received a doctorate from Oxford. She is cofounder and CEO of DailyClout.io, a successful civic tech company.

Dr. Wolf announced her upcoming book The Bodies of Others: The New Authoritarians, COVID-19 and The War Against the Humans, dedicated to the way in which the Big Tech, Big Pharma, Communist China, and the U.S. oligarchical elites “seized upon two years of COVID-19 panic in sinister new ways, to not only undermine our Republic but to fundamentally reorient human relations.”

Please support our incredible volunteers in exposing the truth behind the vaccine trials by donating to DailyClout!