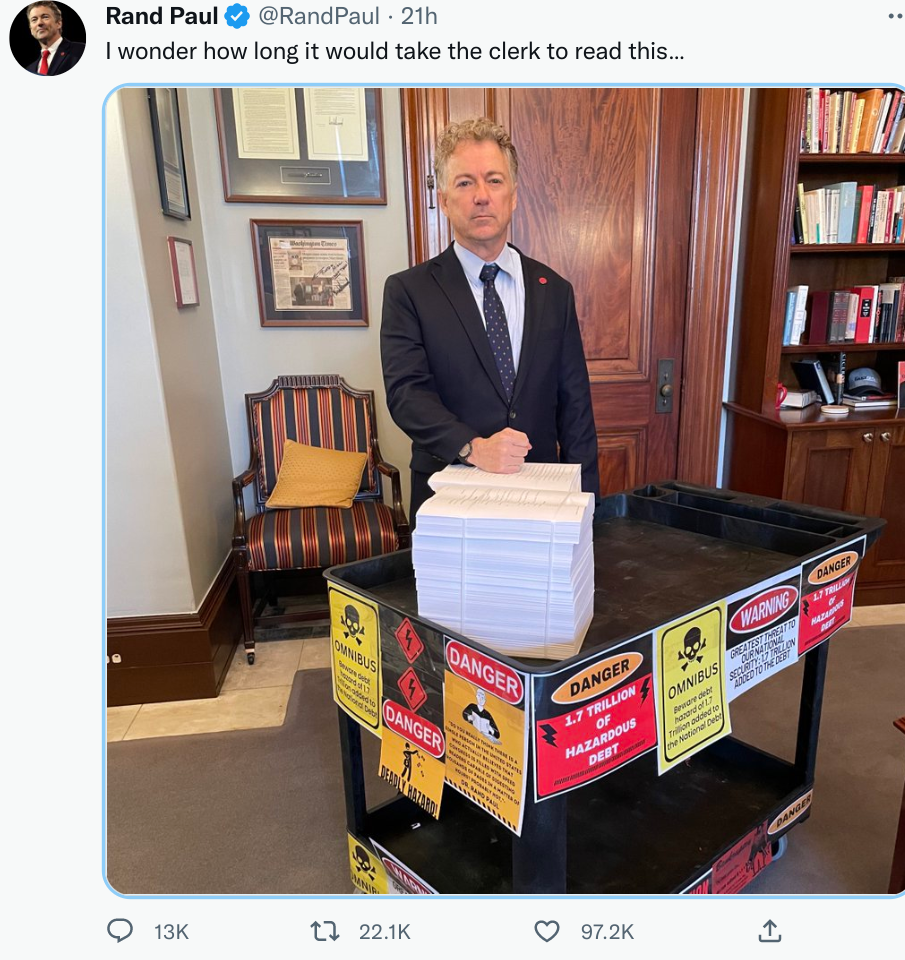 Congress has produced a massive omnibus spending bill totaling 1.7 trillion dollars. While the Democrats are trying to push the bill through the Senate, there is serious pushback brewing from Republicans. Politicians and citizens of both parties should be protesting the nature of this process. Congress had the last 10 months to craft a budget that would benefit the American people, and include elements that are important to everyone. Instead, they dropped a bill in the form of piles of paper that would be simply impossible to absorb in time for the vote before the current budget runs out.

Senate Appropriations Committee Chairman Democrat Patrick Leahy of North Carolina outlined the following as highlights from the bill in his view: 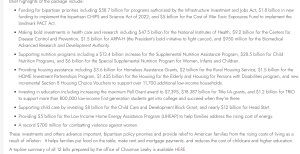 Senator Rand Paul stood up in the Senate with the entire 4,000+ page bill to highlight the absurdity of releasing such a packed bill for review mere days before the vote was due. He also blasted the contents of the bill, along with the way the bill was produced. It was released at 2 AM Monday morning, days before the government goes on break for the holidays, despite knowing all year when the final deadline is.

“It’s a terrible system. Someone needs to stand up – we’re standing up, and we’re going to say No”.

I brought along the 1.7 trillion, 4,000+ page Pelosi-Schumer omnibus spending bill that's being fast-tracked through the Senate. This process stinks. It's an abomination. It's a no good rotten way to run government. We're standing up and saying NO. pic.twitter.com/Wom6xKEeQh

Congressman Dan Bishop from North Carolina put together a Twitter thread pulling out the pieces of the Omnibus bill that he considers to be absurd, which he and 12 of his current and incoming Republican Congressional colleagues are promising to thwart.

Did you know that the House of Representatives has an Office of Diversity and Inclusion?

It's set to receive nearly $26 million in taxpayer dollars. pic.twitter.com/UtJdg4jwKi

Towards the end of his thread, Bishop noted:

“The omnibus was released around 2am today. The Senate is voting now to begin debate on the bill. To have read the entire bill by now, you would’ve needed to read 4+ pages per minute, without a single break, for 16 hours straight. What a farce.”

Some examples from the Omnibus bill that Bishop considers egregious that he included in his tweets:

Government funding runs out on Dec 23, in two days.

Spread the love
This DailyClout article is the writer’s opinion.
One of our country’s most important freedoms is that of free speech.
Agree with this essay? Disagree? Join the debate by writing to DailyClout HERE.
Spread the love
Previous StoryDailyClout.io Proudly Announces that “The Vigilant Fox” has Joined its Team of Distinguished Contributors
Next StoryVermont’s Cardiac Catastrophe, Part 1: Cardiogenic Shock