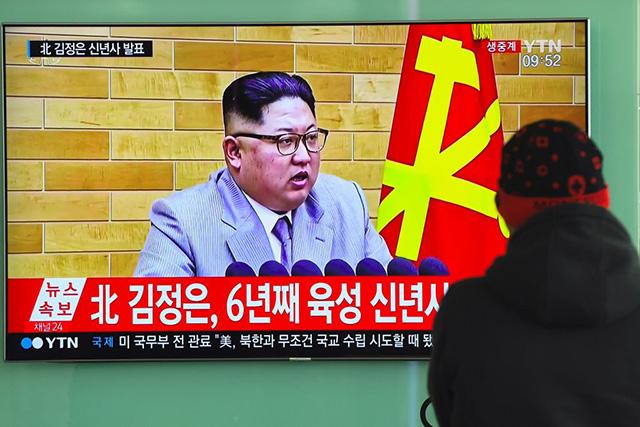 Donald Trump’s veiled threat to use nuclear weapons against North Korea is not only horrifying, but also illegal. It warrants his removal from office.

On New Year’s Day, North Korean leader Kim Jong-un asserted, “The entire area of the US mainland is within our nuclear strike range. The United States can never start a war against me and our country,” adding, “The United States should know that the button for nuclear weapons is on my table.” Kim clarified that he would not use those weapons except in response to aggression.

Not to be outdone by Kim, Trump tweeted in response, “I too have a Nuclear Button, but it is a much bigger & more powerful one than his, and my Button works!”

The president’s cavalier threat to start a nuclear holocaust cannot be dismissed as the rant of an immature bully. Trump controls a powerful nuclear arsenal. In fact, a few days after Trump’s nuclear button tweet, the Centers for Disease Control and Prevention declared it would sponsor a public meeting to cover “planning and preparation efforts” in the event of a nuclear attack.

Trump’s tweet violates several laws. Threatening to use nuclear weapons runs afoul of the United Nations Charter, which forbids the use of or threat to use military force except in self-defense or when approved by the Security Council. North Korea has not mounted an armed attack on the United States nor is such an attack imminent. And the UN Security Council has not given the US its blessing to attack North Korea. Trump’s tweet also constitutes a threat to commit genocide and a crime against humanity.

The ominous tweet follows Trump’s promise last summer that North Korean threats would be “met with fire and fury,” a phrase that found its way into the title of Michael Wolff’s explosive new book. Trump also told the UN General Assembly he would “totally destroy North Korea.”

“Nuclear war is not a game,” said Derek Johnson, executive director of Global Zero, the international movement for the elimination of nuclear weapons, in a statement. “We are flirting with unacceptably high risks that carry catastrophic consequences for the country and the world. No one can afford to not take Trump’s threats seriously — least of all the North Koreans, who could be provoked into striking first in order to preempt what they perceive as an imminent attack.”

Lawmakers are echoing the concerns of advocates like Johnson.

“A nuclear conflict on the Korean peninsula would be a catastrophe, leading to the deaths of potentially millions of people, including American service members and families stationed there,” Sen. Edward J. Markey (D-Massachusetts) stated.

Indeed, “even a conventional war between the US and [North Korea] could kill more than 1 million people; a nuclear exchange, therefore might result in tens of millions of casualties,” The Intercept reported.

Jeffrey Lewis, an expert in nuclear policy at Middlebury Institute of International Studies, told HuffPost that after a nuclear strike, “there would be survivors for days trying to make their way out of the rubble and back home, dying of radiation poisoning.”

Markey said that Trump’s tweet “borders on presidential malpractice,” adding, “We cannot let this war of words result in an actual war.”

Eliot A. Cohen, assistant to Secretary of State Condoleezza Rice during the George W. Bush administration, was alarmed by Trump’s nuclear button tweet.

Cohen tweeted, “Spoken like a petulant ten year old,” adding, “But one with nuclear weapons — for real — at his disposal. How responsible people around him, or supporting him, can dismiss this or laugh it off is beyond me.”

Some of those surrounding Trump are indeed laughing: Consider the disturbing comments of Michael Flynn Jr., son of Trump’s former national security adviser Michael T. Flynn, who recently pleaded guilty to lying to the FBI. Flynn Jr. thought Trump’s tweet was “just awesome.” Flynn Jr. tweeted, “This is why Trump was elected. A no bulls#t leader not afraid to stand up for his country.”

Removal Under the 25th Amendment

A president can be constitutionally removed from office — either by using the 25th Amendment or impeachment — even without actually committing a crime.

“This tweet alone is grounds for removal from office under the 25th Amendment,” tweeted Richard Painter, ethics lawyer for George W. Bush and currently vice chairman of Citizens for Ethics and Responsibility in Washington DC. “This man should not have nukes.”

Sen. Bob Corker (R-Tennessee), chairman of the Senate Foreign Relations Committee, told The New York Times in October that Trump was setting us “on the path to World War III.” He said, “I know for a fact that every single day at the White House, it’s a situation of trying to contain him.” Corker noted that those apprehensions “were shared by nearly every Senate Republican.”

In his new book, Fire and Fury: Inside the Trump White House, Wolff writes that his interviewees “all say [Trump] is like a child.” One source said it was frequently impossible for staff to determine what Trump wished to do. It was like “trying to figure out what a child wants.”

Wolff wrote in the Hollywood Reporter, “Hoping for the best, with their personal futures as well as the country’s future depending on it, my indelible impression of talking to them and observing them through much of the first year of his presidency, is that they all — 100 percent — came to believe he was incapable of functioning in his job.”

Impeachment of the President

The Constitution provides for impeachment when the president commits “high crimes and misdemeanors.” This does not require actual law breaking. A president can be impeached for abuse of power or obstruction of justice, which were two of the articles of impeachment charged against Richard Nixon.

Impeachment is a political, not a legal, process. As Alexander Hamilton wrote in Federalist No. 65, offenses are impeachable if they “proceed from the misconduct of public men, or, in other words, from the abuse or violation of some public trust.” Hamilton added, “They are of a nature which may with peculiar propriety be denominated POLITICAL, as they relate chiefly to injuries done immediately to the society itself.”

As I described in my article, “Time to Impeach Trump,” his illegal threats against North Korea and his efforts to obstruct justice regarding the Russia investigation constitute grounds for impeachment.

But we cannot expect the Republican-controlled Congress will either impeach Trump or affirm a decision to remove him under the 25th Amendment. They are thrilled that Trump spearheaded their tax cuts for the rich and is appointing radical right-wing judges who will eliminate reproductive and LGBTQ rights.

“By all accounts,” Eric Levitz wrote in New York Magazine, “most GOP Congress members recognize that Donald Trump” maintains “only peripheral contact with reality.” But, Levitz added, “They have, nonetheless, decided to let him retain unilateral command of the largest nuclear arsenal on planet Earth because it would be politically and personally inconvenient to remove his finger from the button.”

Rep. Jamie Raskin (D-Maryland) introduced a bill that would establish a commission to evaluate Trump’s fitness for office. It has 57 co-sponsors.

Tell your Congress member to sign on as a co-sponsor to H.R. 1987, the Oversight Commission on Presidential Capacity Act. Marjorie Cohn is professor emerita at Thomas Jefferson School of Law, former president of the National Lawyers Guild, deputy secretary general of the International Association of Democratic Lawyers, and a member of Jewish Voice for Peace. She is co-author (with Kathleen Gilberd) of Rules of Disengagement: The Politics and Honor of Military Dissent. The second, updated edition of her book, Drones and Targeted Killing: Legal, Moral, and Geopolitical Issues, was published in November. Visit her website: MarjorieCohn.com. Follow her on Twitter: @MarjorieCohn.
Previous StoryBill to Privatize Tech of Creepy TSA Airport Screenings; Bill Gives Pres Unchecked Access to Your Biometrics and May Let Him Call You “Associate” of “Terrorist Organization”
Next StoryFISA is Law…again, and a House Bill Protects “Born Alive” Infants – Last Week In Congress
Write for DailyClout