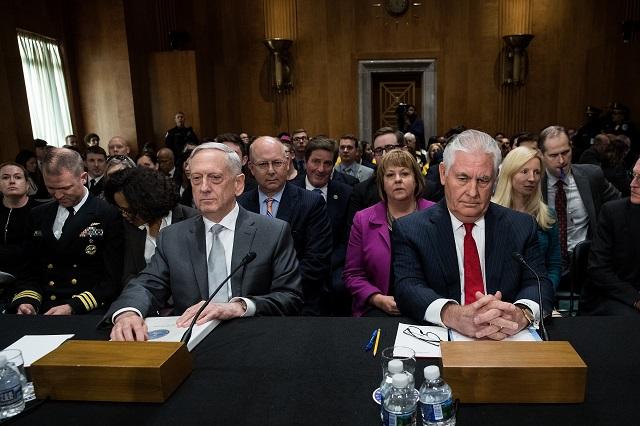 Defense Secretary James Mattis and Secretary of State Rex Tillerson told the Senate Foreign Relations Committee on October 30 that the Trump administration has all the legal authority it needs to kill people anywhere in the world. But just in case Congress wishes to update its old Authorization for the Use of Military Force (AUMF), Mattis and Tillerson told them how to do it: Write a blank check to the president.

The October 4 killings of four US soldiers on a “routine training mission” in Niger brought the committee’s hearing into sharper focus. It turns out the presence of these troops in Niger was unlawful.

Mattis claimed the four dead US soldiers were just there on a train-and-advise mission. “I think it was reasonable to think they could go out there and train these [Niger] troops without the idea they’re going into direct combat; but” he admitted, “that’s not a complete answer. I need to wait until I get the investigation to fully appraise it.”

Derek Gannon, a former Green Beret, said, “[US military involvement in Africa] is called Low Intensity Irregular Warfare, yet technically, it’s not considered war by the Pentagon. But,” he added, “warfare is warfare to me.”

Mattis insisted that Title 10 of the US Code grants authority for train-and-advise missions anywhere in the world. But the War Powers Resolution (WPR), passed by Congress in the wake of the Vietnam War, specifies that the president’s authority to order US troops into hostilities cannot be inferred from any provision of law that does not specifically authorize the use of US forces in hostilities. And Title 10 does not.

To read more stories like this, visit Human Rights and Global Wrongs.

The WPR allows the president to introduce US Armed Forces into hostilities or imminent hostilities in only three situations:

First, after Congress has declared war, which has not happened since World War II. Second, in “a national emergency created by attack upon the United States, its territories or possessions, or its armed forces,” which had not occurred prior to the killings of the US troops in Niger. And third, when there is “specific statutory authorization,” such as an Authorization for the Use of Military Force.

In the 2001 AUMF, Congress authorized the president to use military force against individuals, groups and countries that had supported the 9/11 attacks. Congress rejected the George W. Bush administration’s request for open-ended military authority “to deter and preempt any future acts of terrorism or aggression against the United States.” That AUMF does not authorize US military action in Niger against ISIS, which didn’t even exist in 2001 when Congress issued it.

The WPR requires the president to report to Congress within 48 hours of introducing US forces into hostilities. That report must explain the circumstances necessitating the introduction of US Armed Forces, the constitutional and statutory authority for the deployment, and the estimated scope and duration of the hostilities or involvement.

Many in Congress, including Sen. Lindsey Graham (R-South Carolina) and Senate Minority Leader Chuck Schumer (D-New York), were not aware there are currently 800 US troops stationed in Niger. Sen. Tim Kaine (D-Virginia) told the New York Times, “I don’t think Congress has been completely kept up to date.”

The president must withdraw the troops within 60 days of initiating the use of military force unless Congress declares war or provides a “specific authorization.” Congress has not specifically authorized US troops to fight ISIS in Niger.

Sen. Bob Corker (R-Tennessee), chairperson of the Senate Foreign Relations Committee, stated at the hearing that Congress has been notified of troop deployments around the world, including the buildup in Niger, and has responded by funding the Department of Defense.

“As Niger proved,” Corker noted, “those forces can find themselves in combat at any moment.”

However, appropriating funds to support a particular operation does not constitute “specific authorization” under the WPR.

The practice of using questionable legal logic to justify military operations is not unique to the Trump administration. In fact, our last president engaged in similar maneuvers.

Barack Obama rationalized his use of military force in several countries with reference to the 2001 AUMF, as well as to a second AUMF issued in 2002.

The 2002 AUMF was granted to Bush by Congress specifically to remove Saddam Hussein from Iraq. That license ended once that purpose was accomplished. So, the 2002 AUMF does not provide a legal basis for US combat troops in Niger either.

Ranking committee member Ben Cardin (D-Maryland) stated at the committee hearing that the 2001 and 2002 AUMFs have now become “mere authorities of convenience for presidents to conduct military activities anywhere in the world,” adding, “They should not be used as the legal justification for military activities around the world.”

Cardin said he voted for the 2001 AUMF, and he “and all of us never intended it would still be used to justify the use of military force against ISIS.”

Now Mattis and Tillerson are attempting to rely on the same two AUMFs to justify US military intervention throughout the world. At the hearing, they also cited the president’s powers under Article II of the Constitution.

Article II states, “The President shall be Commander in Chief of the Army and Navy of the United States, and of the Militia of the several States, when called into the actual Service of the United States.” However, Article I specifies that only Congress has the power to declare war. Taken together, the articles convey that the president commands the armed forces once Congress authorizes war.

Under the United Nations Charter, the president can order military interventions, but only in self-defense against an armed attack. That does not apply to the situation in Niger, which was not prosecuted in self-defense in the face of an armed attack against the United States or another UN member nation. Indeed, we have seen no evidence that the people who killed the US troops were with ISIS.

While Mattis and Tillerson maintain that the president already has unfettered power to introduce US troops into hostilities, they testified they would welcome a new AUMF tailored to the use of military force against ISIS. Both secretaries stated that a new AUMF should have no geographical or temporal limitations and the 2001 and 2002 AUMFs should not be repealed until a new one is in place.

In other words, Mattis and Tillerson want Congress to give the president a blank check to make war anytime, anywhere on Earth, as he sees fit. They seek the imprimatur of Congress for perpetual war with the whole world as the president’s battlefield.

However, they are conveniently forgetting that in addition to the WPR, the president must comply with the UN Charter, a treaty the US has ratified. The charter requires that states settle their international disputes peacefully and prohibits the use of military force except in self-defense.

Countries may engage in individual or collective self-defense only in the face of an armed attack.

To the extent the United States claims the right to kill suspected terrorists or their allies before they act, there must exist “a necessity of self-defence, instant, overwhelming, leaving no choice of means, and no moment for deliberation,” under the well-established Caroline Case.

The hostilities in Niger that resulted in the deaths of four US troops were not conducted in self-defense. In addition, the deployment of these forces to engage in hostilities was not authorized by any other provision of law, as explained above.

Congress must retain the power to authorize war, which is what the framers intended. They should refrain from relinquishing it to an unpredictable and volatile president.

Copyright, Truthout. May not be reprinted without permission. Marjorie Cohn is professor emerita at Thomas Jefferson School of Law, former president of the National Lawyers Guild, deputy secretary general of the International Association of Democratic Lawyers and a member of the national advisory board of Veterans for Peace. The second, updated edition of her book, Drones and Targeted Killing: Legal, Moral, and Geopolitical Issues, will be published in November. Visit her website: MarjorieCohn.com. Follow her on Twitter: @MarjorieCohn.