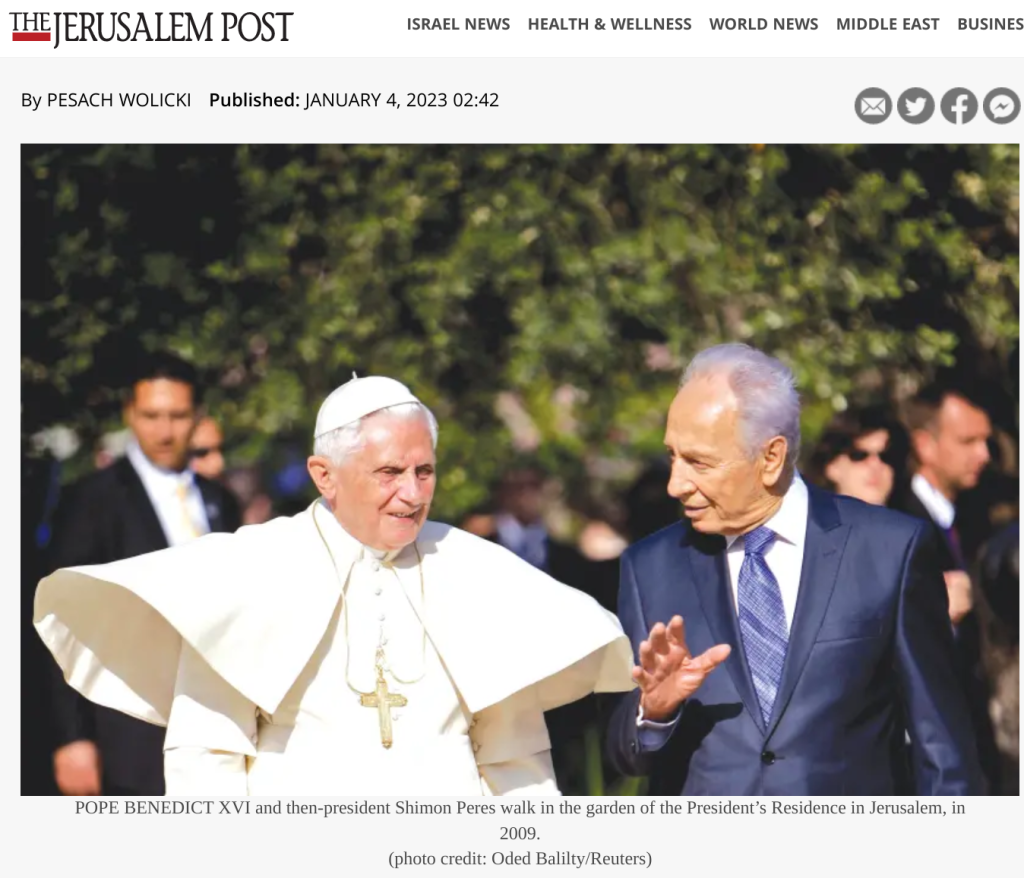 With the passing a few days ago of Pope Benedict XVI, born Joseph Ratzinger, reaction from the
Jewish community has been mixed. During his tenure as pope, Benedict was accused by some of
causing a strain on Jewish-Catholic relations. His support for the canonization of WWII-era Pope Pius
XII, as well as his lifting of the ex-communication of four bishops who held antisemitic and Holocaust-
denying positions, led many in the Jewish community to see Benedict as a divisive pope, one who
was setting back Jewish-Catholic relations in troubling ways. No wonder some have argued that the
warm statements he expressed upon visiting Park East Synagogue in New York in 2008 – becoming
the first Pope to pray in a Jewish house of worship – were mere conciliatory sound bites that did not
represent his true attitudes toward Judaism and the Jewish people.

All this is understandable. Yet a more complete view of Benedict’s positions and statements about
the Jews and Israel reveals that he was, in fact, a significant force for reconciliation between the
Church and Judaism.

Within the current Catholic landscape, with the present Pope fully identified with the progressive,
liberal wing of the church, Benedict, a rare pope emeritus, was the leading theologian of the
conservative, traditional Catholic community. And this should matter to Jews.

As a traditionalist, Benedict was known for taking positions that pushed back against many of the
modernizing positions of the church. In his calls for the innovations of the Second Vatican Council of
1965 to be interpreted narrowly, many saw him as an advocate for going back to a pre-Vatican II
Catholicism.

And yet, when it came to Judaism and the Jewish people, consider these words, spoken in the Great
Synagogue of Rome in 2006:

The people of Israel have been liberated many times from the hands of their enemies and, in times of
anti-Semitism, in the dramatic moments of the Shoah, the hand of the Almighty has supported and
guided them. The favor of the God of the covenant has always accompanied them, giving them the
strength to overcome trials. To this divine loving attention your Jewish community, present in the city
of Rome for more than 2,000 years, can also render testimony. (emphasis added)

Popes choose their words carefully. Such language, clearly affirming an ongoing covenantal
relationship between God and the Jewish people, is anything but traditional in the Catholic Church.
For many centuries, the Catholic Church espoused the supersessionist position, the belief that the
Church had replaced the Jewish people as the bearers of God’s covenant, also known as
Replacement Theology. It cannot be overstated that Benedict could easily have made a conciliatory
statement about Divine Providence directing the history of the Jewish people without referencing a
covenant between the Jewish people and God. By including these words, Benedict was explicitly
repudiating supersessionism. While Benedict was not the first pope to affirm the Jewish people’s
covenantal relationship – his predecessor, John Paul II, had done so a few years earlier – Benedict’s
choice to include this phrase in his remarks sent a definitive message to the Church’s conservative
wing that supersessionism was inadmissible.

An even more significant example of Benedict’s positive impact on Jewish-Christian relations is
evident in his position on the issue of proselytizing. In 2018, 5 years after resigning his position as Pope, Benedict published a short monograph entitled: Nicht Mission, sondern Dialog (“Not Mission
but Dialogue”).

The Gospel of St. Matthew ends with the commission given to the disciples to go forth into all the
world and make all nations into disciples of Jesus (Mt 28:19). Missionary activity among all peoples
and cultures, [that] is the assignment Christ has left to His followers. The point is to acquaint people
with the “unknown God” (Acts 17:23). Man has a right to get to know God because only he who
knows God can properly live his humanity. That’s why the missionary mandate is universal — with
one exception: A mission to the Jews was not intended and not needed for the simple reason that
they alone among all peoples [already] knew the “unknown God.” With regard to Israel, therefore,
there is no mission but [only] dialogue about whether Jesus of Nazareth is “the Son of God, the
Logos” whom Israel and, without knowing it, [all of] humanity has been awaiting in accordance with
the promises made to His People. (emphasis added)

To fully understand the significance of this statement, two points are in order. First, because
Benedict was no longer Pope when he made this startling assertion, it was clearly an expression of
his authentic theological position, rather than a mere political or policy statement that could
otherwise be discounted. Second, this statement that the missionary mandate, known to Christians
as “the Great Commission,” does not call for a mission to Jews had never before been so explicitly or
forcefully expressed. Even John Paul II, generally viewed as the pope most friendly to the Jews, did
not go this far in writing. We must appreciate and acknowledge the extent to which Pope Emeritus
Benedict, the Church’s leading theologian and hero to the Church’s traditionalist members, was
pushing the theological envelope by forcefully rejecting the active mission to convert Jews to
Christianity. Indeed, Benedict was thereby moving the Church in the direction of a more respectful
relationship with the Jewish people.

Had these positions been voiced only by the current pope, Pope Francis, an ecumenical progressive,
it would be all too easy for conservative traditionalist Catholics to brush them aside as the politically
motivated statements of a liberal Pope who does not faithfully represent legitimate Catholic
theology. In fact, given that many traditional Catholics view Francis’ more liberal positions with great
suspicion, a rejection of supersessionism or a mission to the Jews would be regarded as liberal, and
perhaps invalid, innovations. Because this anti-supersessionist monograph was written by Benedict,
the leading theologian of the traditionalist camp, it is safe to say that this position has the status of
settled Church doctrine. And again, Benedict wrote this at a time in his career when silence on this
issue would have been natural.

Whatever Pope Benedict’s reasons for decisions that were perceived as slights by the Jewish
community, his explicit opposition to the proselytization of Jews, and his affirmation of the covenantal
status of the Jewish people stand as monumental contributions to the long-term health of the
Jewish-Catholic relationship. 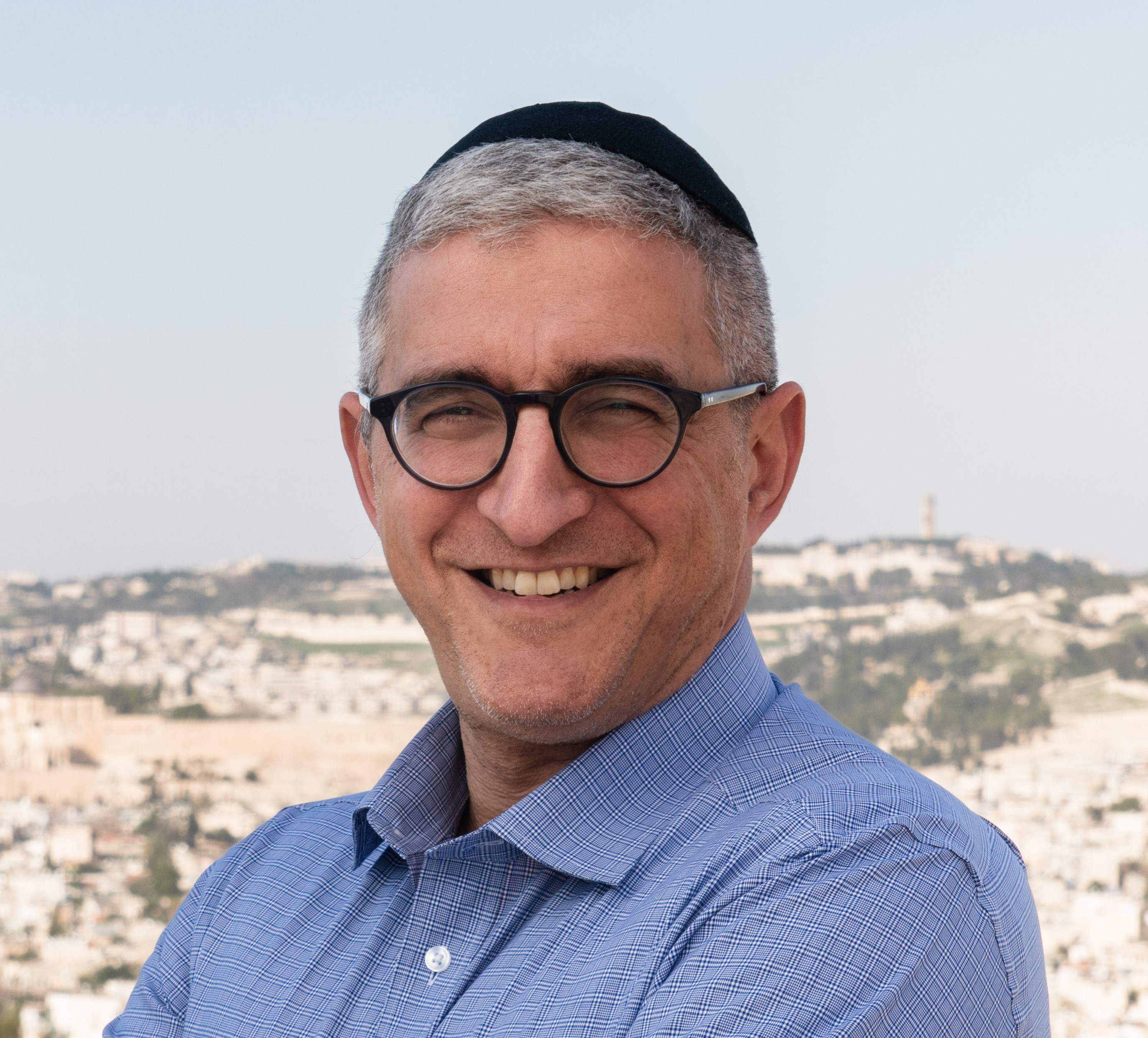 Rabbi Pesach Wolicki is the Executive Director of Ohr Torah Stone’s Center for Jewish-Christian
Understanding and Cooperation in Jerusalem, and cohost of the Shoulder to Shoulder podcast.

Spread the love
This DailyClout article is the writer’s opinion.
One of our country’s most important freedoms is that of free speech.
Agree with this essay? Disagree? Join the debate by writing to DailyClout HERE.
Spread the love
Previous StoryOne Hundred Reasons
Next StoryGroundbreaking New Book Sends Shockwaves Through Pfizer’s Criminal Enterprise