“How the Left Has Lost Control of Language” 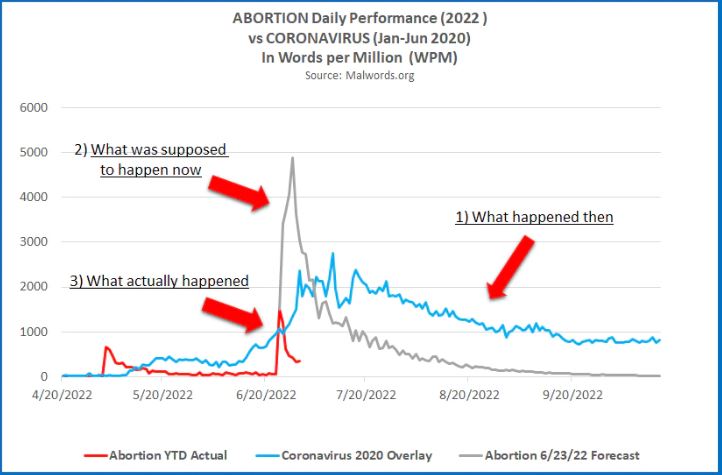 The Left Has Lost Control of Language

So they are torching everything else before November midterms

What Happened. And What Didn’t.

We expected more. A lot more.

ABORTION is one of the top five malworded terms in the American patois, freighted with decades of in-your-face activism, waves of militant feminism, right down to #MeToo and #BelieveAllWomen.

Roe v Wade was regarded by many— on both sides— as “law of the land.” To question its legitimacy was to be worse than a climate, election or vaccine denier. It was to be anti-woman, the cardinal sin of the patriarchy.

The right of a mother to take the life of her pre-born— and, increasingly her just-born– is fundamental to a free and functioning society.  If something, anything says he is not the right guy, it is her exclusive and inalienable right to terminate his genetic legacy in utero and, increasingly, post utero.

It has been for the past fifty years the hill to die on.

And to see that hill turned into a statistical speed bump has been shocking. To all of us— on both sides.

But this is where we are. Malwords.org has been serving up metrics-based analysis on ABORTION since a draft of the Dobbs decision was leaked to Politico back on May 3.

The response in the news corpora was a tremor of a potential seismic cataclysm we could expect if Roe were to be overturned.

We started seeing a lot of similarities to big-volume malwords like PANDEMIC and CORONAVIRUS, with the analysis pointing to WPM’s as high as 11,000— an unprecedented-but-plausible Category-5 number befitting any restriction upon America’s most sacred civil right.

As ABORTION’s post-curve tail lengthened, we began hedging our bets, leaning toward a more compressed CORONAVIRUS-like cycle, with a sixty-day Pre-Curve and a 180-day Core. That brought down peak WPM to a fierce but far less deadly Cat-3 level of 4,000 WPM.

When the decision dropped last Friday, we saw blast-off right on trajectory, hitting 1,495 WPM, and thought we had nailed it.

Today, a full week since the Dobbs drop, ABORTION has fallen to 342 WPM, and is now on track to sink back below that critical 50 WPM one-a-day level by mid-August.

The tide has pulled out. We’re still standing on the beach. No tsunami.

How could an event that so many were predicting would turn both popular opinion and the apparatus of state against The Deplorables end up shattering the arm of those wielding it as a weapon of MAGA destruction?

The Left is turning inward upon itself, and outward upon the world–a snarling orc seeking to devour whom it may.

Joe wanders about Europe, tossing billions to others while his own starve, shrugging off imploding markets, crushing fuel prices, looming food shortages, thousands dying at the hands of a human trafficking industry he has enabled.

But Joe declares the Supreme Court is now our biggest threat, urging Congress to codify Roe into law, while dragging America towards a war that none of our European allies want.

Not to be outdone, Nancy introduces a trans bill of rights making it a crime for parents to shield their children from Dr. Mengele’s knife. If passed, nothing will stop these taxpayer-funded/ Big-Pharma/ Big-Med-incentivized perverts from leading our innocents down the primrose path to ghastly, gonad-mangling surgery and a lifetime of drug dependency… or else you will never be cool!

While the DOJ continues to arrest anyone who criticizes Joe Biden or his family on charges stemming from the sworn hearsay of a junior staffer nicknamed Two Sugars.

This is what illegitimate regimes do when they are wounded.

They have lost control of the language.

You saw it in the chart above: All the king’s horses and all the king’s women were unable to dictate narrative and outcome on its most sacrosanct malword, ABORTION.

Until last Friday, all people great and small, were expected to bend the knee to the Left’s great and powerful god Roe, brother of Molech the Insatiable Child-Devourer.

As of this Friday, dozens of states are moving to ban ABORTION.

And the Left desperately doesn’t want you to notice— so they are setting fire to everything as they go.

Harvey Oxenhorn, is a cybersecurity consultant, founder of Malwords Weekly, and author of the upcoming book, The Atrocity Algorithm, How The Media Became The Enemy of The People. He writes The Five Stages of Unf*ck, Red Pill Journey to January 2.0. , also on Substack. Follow him on Gettr, Gab, and MeWe @HarveyOxenhorn

Spread the love
This DailyClout article is the writer’s opinion.
One of our country’s most important freedoms is that of free speech.
Agree with this essay? Disagree? Join the debate by writing to DailyClout HERE.
Spread the love
Previous StoryIsraeli MOH Hides Study Showing Adverse Events Following mRNA Vaccine in Kids
Next StoryRoe v Wade: Why Can’t We Have Important Conversations?