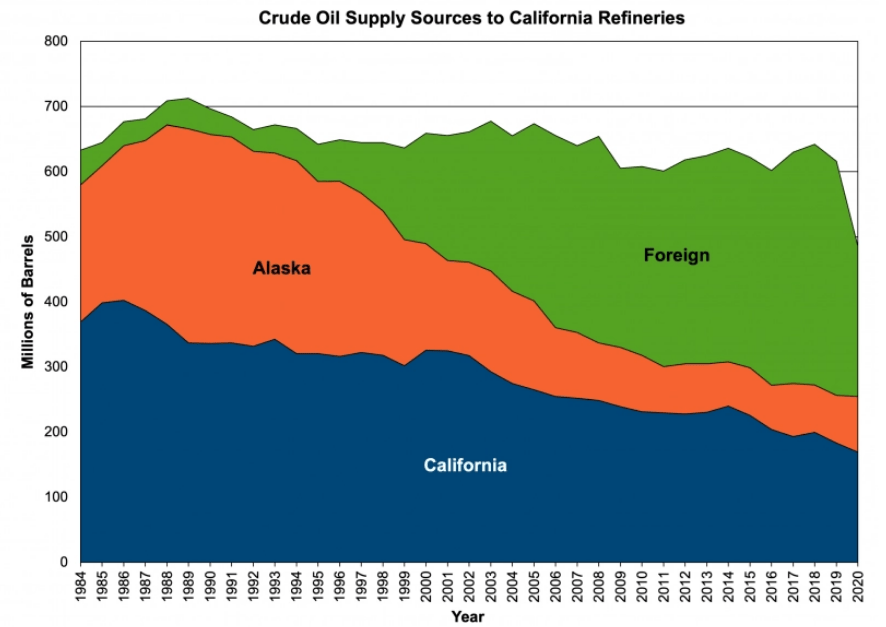 Increased emissions from foreign countries, and higher fuel costs for Californians are of no concern to Newsom

To gain more press time, California Governor Newsom just announced California moves to ban oil wells within 3,200 feet of homes and schools.  Governor Newsom is proud of continuing the decline of in-state oil production that’s been going on for more than 30 years.

While Newsom soaks up the glory of reducing in-state oil production, he seems oblivious to the data from his own California Energy Commission chart that any grade school student can easily observe. The crude oil demands of the state are being met be continuing to increase imported crude oil from foreign sources to meet the demands of the state. The same countries that are halfway around the world, with significantly less environmental controls, that ship their oil via polluting tankers to California ports.

Newsom is proud of increasing emissions somewhere else, and increasing costs to California consumers, just to grab the microphone to highlight that California is reducing in-state oil exploration.

The Governor loves to view energy with tunnel vision, believing that Californians only breathe California air and not the air in the world’s atmosphere. Only seeing the clean in front of his eyes while being oblivious to the negative impact to the world’s emissions, the health of the 8 billion on this planet, and the world environment, that result from importing oil rather than producing it in-state, in the most environmentally controlled location in the world

Under Newsom’s direction, (I did not use the word “leadership”) future “energy costs” looks very bleak for ALL 40 million residents of the state as the economy starts to recover back to near-normal energy demands for the fifth largest economy in the world. The Governor refuses to focus on REDUCING the cost of energy.

With California already having the highest cost of fuels in the country the Governor continues to do everything possible to further INCREASE the costs for electricity and fuels for its 40 million residents. The wealthy and middle class have more tolerance for expensive energy, but poverty kills and would make energy supplies more expensive on the less fortunate and worsen poverty.

While many in California are experiencing the rapid growth of “energy poverty” that makes California’s economic recovery from the pandemic even more challenging, the state has 18 million (45 percent of the 40 million Californians) that represent the Hispanic and African American  populations of the state.

The financial racial biasing of climate policies against the poorest residents, particularly Latinos and African Americans is unconscionable.

The Governor is supportive of creating a national security risk for all of America, as California’s dependency on foreign suppliers for California’s energy needs, as well as the West Coast military operations, has increased imported crude oil from foreign countries from 5 percent in 1992 to 58 percent today of total consumption as noted in the California Energy Commission chart.

As a result of the Governor’s continuous efforts to decrease in-state oil production, the crude oil imported from countries halfway around the world, representing 58 percent of the states’ needs, costs California more than $60 million dollars a day, yes, every day, being paid to oil-rich foreign countries.

On Earth Day 2021, to gain personal press and another instant gratification act, Newsom ordered an end to fracking in California by 2024, and to work toward phasing out all in-state oil production by 2045, perpetuating continuous cost increases. Now, proposing setbacks from oil wells, more increases in cost to the consumers is on the way.

Newsom’s’ irresponsible fiscal actions will increase worldwide emissions and require California to increase its monthly imports resulting in expenditures increasing from the current $60 million dollars a day to a whopping $90 million EVERY DAY for foreign countries to support the fifth largest economy in the world. Are the port infrastructures capable of receiving all its energy from foreign countries?

By encouraging oil demands be met from foreign countries halfway around the world, Newsom continues to support greater emissions generated by those foreign countries to meet the states’ energy demands, as they have significantly less stringent environmental regulations than California, if any.

In addition to the issue of over reliance on foreign countries for the energy needs of the fifth largest economy in the world, and the associated national security risks, is it ethical to “leak” emission generation to other countries, and dictate that California residents bear the growing costs?