Earthquake in The Metaverse 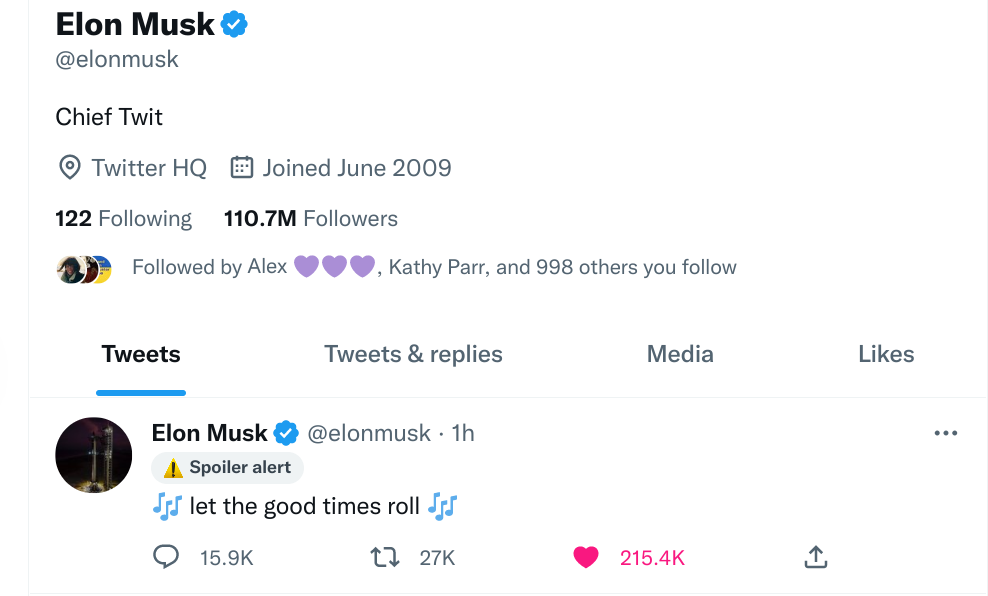 “The bird is freed”

At midnight on Friday, October 28, Elon Musk became the official owner of Twitter. He came in guns blazing, and fired 4 high-level executives within hours, including:

It’s 2 AM EST as I’m writing this, and the mood on Twitter is electric. There’s a sense of relief, freedom, victory, and excitement for the serious potential that lies ahead of us in the public sphere.

Kyle Becker did a great roundup of the celebratory tweets that have been flooding Twitter since the news became official.

Elon Musk, the new “Chief Twit”, as he labeled himself on his Twitter profile yesterday, tweeted at 11:49 PM, “the bird is freed”. He then made it clear that he will remove all lifetime bans, and allow everyone their place in the digital town square.

Earthquake in the Metaverse

The implications of this have endless potential. Love it or hate it, most of us have an entire metaverse that we exist inside of and built around ourselves, in addition to our real-life experiences. The crossover between the two has extremely serious consequences, and the ever-tightening noose around free speech in the top social media platforms was causing real-life chaos to those caught in the censorship crosshairs.

While Twitter has a much smaller user base than Facebook or Instagram, its users have an outsized influence due to the nature of the communication style on Twitter. It’s an easy way for celebrities, politicians, and media personalities to push out messages, which then get amplified in traditional media essentially beaming their message to everyone, even the majority who don’t engage on Twitter, giving their tweets much farther reach.

Manipulation of information by the elite class is at the root of several world-altering situations we find ourselves in today, in this Clown World of the 2020s. That includes the 2020 election, Covid itself, mandates and vaccines, the Ukraine war, the climate change agenda, and a million more on smaller scales.

Elon Musk taking control of Twitter for the express purpose of throwing open the doors of conversation, and inviting the exiled back to the party is going to impact our immediate and long-term future in ways that we probably can’t even dream of at the moment.

The conclusion of this months-long drama is an exciting one, and I hope all the cool kids return to Twitter soon and bring their voices back with them. Whether or not he keeps his early promises is still unknown, but for now, there’s reason to be optimistic.

Spread the love
This DailyClout article is the writer’s opinion.
One of our country’s most important freedoms is that of free speech.
Agree with this essay? Disagree? Join the debate by writing to DailyClout HERE.
Spread the love
Previous StoryNew study From Turkey Shows Vaccination Almost Doubled the Incidence of Menstrual Irregularities that Required Medical Treatment
Next StoryAmy Kelly: How Withholding the Pfizer Trial Documents Denied Us Informed Consent