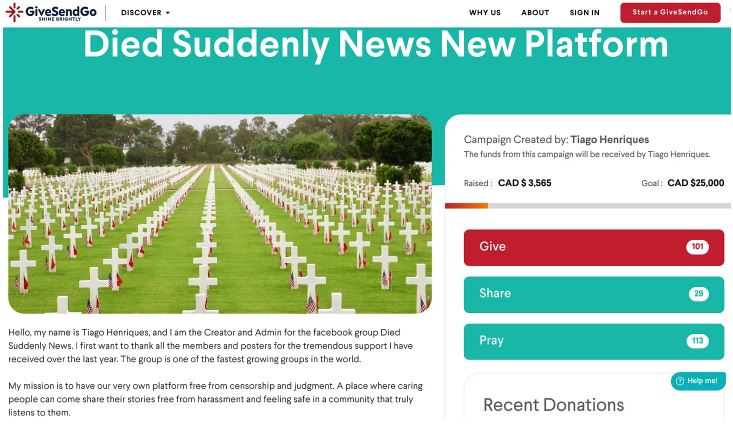 Tiago Fernando Henriques is an artifical intelligence programmer who lives in Canada. Back in the spring of 2021, he began to notice an unusually high number of his young peers experiencing serious medical issues, such as chest pain, seizures and strokes. He heard about a story from a friend about a buddy of his whose body went haywire 10 minutes after recieving the Pfizer shot. Mr. Henriques decided to go check out the situation for himself, and he took a trip out to North Sydney. The person in question was a disaster, paralyzed and not functional. After seeing him in June 2021, Mr. Henriques opened a Facebook group with the goal being support and communication from those who were injured from a Covid vaccine. The group grew organically for about a year, and had reached ~12k members at the beginning of this summer. Since then, the group has broken records for pace of growth. There currently are over 286,400 members, and it shows no signs of slowing down.

Died Suddenly News is the name of the group, and it’s heartbreaking to realize that the growth of the group is due to people all over the world suffering suddenly, due to injuries or deaths of loved ones. Mr. Henriques personally approves every post in the group before it’s published, and he has a volunteer team of 30 moderators from all over the world in all time zones. The group has turned into a valuable resource, not only for people to find emotional and practical support, but for data. Mr. Henriques’s background as an AI specialist puts him in a position to be able to methodically collect and analyze data from the stories that are pouring in of post-vaccination disaster.

Mr. Henriques noted a few important pieces of information from the data he’s collected so far:

Mr. Henriques is very well aware of the threat of censorship that hangs like a dark cloud over conversations on FB. Multiple similar groups have been shut down, including a group started in early 2021 by Brianne Dressen, a vaccine victim from the AstraZeneca clinical trials. As the group continues to explode in membership, Mr. Henriques is busy building an independent platform for the conversation and data analysis to continue, should the worst occur. He’s gladly accepting donations from those who’d like to contribute towards this expensive but important venture, and he created a GiveSendGo that details his plan.

Mr. Henriques appeared on Steve Kirsch’s weekly show VSRF last week and had a conversation with Mr. Kirsch about the group, how it began, and what his plans are moving forward.

Died Suddenly News is a powerhouse, because it’s made up of the people. Heartbreaking stories flood in by the dozens every day from all over the world, the stories are eerily similar, and many people who post include that barely anyone in their circles will acknowledge the elephant in the room. Mr. Henriques and the group he launched is forcing the conversation to be had. It’s offering relief to those who feel like they live on a different planet from those they’re surrounded by who are blissfully, and sometimes willfully unaware of the unfolding disaster. It’s really difficult to confront, and those of us who have been surrounded by this information for over two years are growing more frustrated and confused by those who manage to continue to claim ignorance.

Well, they won’t be able to much longer, and as painful as it will be, we must reach that critical tipping point where vaccine injuries are acknowledged by the mainstream. The only way out of this mess is to go through it, and do our part to help the injured, share information and stand together against the medical criminals to resist their medical tyranny. Died Suddenly News is undoubtedly a huge force in pushing closer to the tipping point, and the stories on there remind us of the people behind the numbers. These are just a tiny sample from the dozens that are pouring in per day.

Spread the love
more
This DailyClout article is the writer’s opinion.
One of our country’s most important freedoms is that of free speech.
Agree with this essay? Disagree? Join the debate by writing to DailyClout HERE.
Spread the love
more
Previous StoryAMPS Reclaiming Medicine Conference FEATURING Dr. Naomi Wolf and Amy Kelly
Next StoryYesterday was a BAD DAY for Eric Adams and his Vaccine Policy