Anecdotals – Stories of the Vaccine Injured 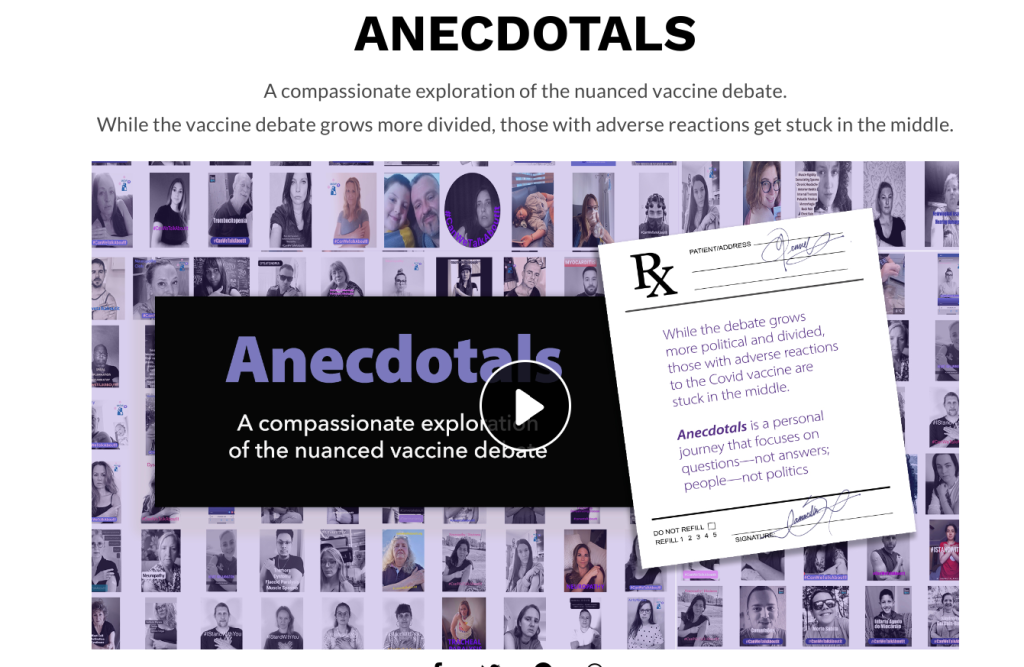 “We are told that we are not significant, because we’re merely anecdotals”

The movie tells the stories of people from all walks of life who took the COVID vaccine. Some took it enthusiastically, and some took it under pressure, but they all suffered after their mRNA vaccine. In an era of suppression and gaslighting, the film provides a sense of relief to many who feel as though they’re alone.

Ms. Sharp and Mr. Stylman met during the height of COVID restrictions, and each had his or her own frustrations with the COVID response that led to their meeting and the making of Anecdotals. The result is this beautiful and heartbreaking tale of suffering and humanity, that’s unfortunately the reality for so many.

One woman highlighted in the film is a mother of 3 young kids from California. She described symptoms of numbness and tingling after her COVID shot. She felt it in her face and hands, which made it difficult for her to hold things. At the time, she had to make the wrenching decision of whether she should vaccinate her children, or pull them out of school due to mandates.

Ms. Jennifer Sharp is a filmmaker from California. She is the writer, director, producer, and editor of Anecdotals. Ms. Sharp took her first dose of the Pfizer COVID vaccine in March 2021, and immediately had multiple strange reactions, such as numbness in her face for weeks. When Ms. Sharp tried to discuss her symptoms with those around her, she seemed to encounter one of two reactions.

People would either get oddly awkward in a way that made Ms. Sharp feel as though she shouldn’t be discussing negative reactions to the Covid vaccine, or she was told “Jennifer, you’re a filmmaker. You have to make a movie about this!”

Having just wrapped up production on a passion project film of fiction, Ms. Sharp was not ready to jump into a new project, and she declined numerous offers to create a video. As months went by, mandates began to control people’s lives, and it impacted Ms. Sharp directly, as she medically couldn’t continue taking vaccine doses after her reaction to Dose One, and was suddenly shut out from participating in society.

Mr. Josh Stylman is the Executive Producer of Anecdotals. He is a business owner from New York who was extremely frustrated over the COVID mandates. He hosted multiple meetings for people who wanted to discuss the mandates, and what could be done about them. A friend of Ms. Sharp’s invited her to attend a meeting, to which Ms. Sharp responded that she doesn’t think she would be allowed to attend, as she was not “up-to-date” on her vaccines, and mandates were in place. Her friend assured her it wouldn’t be an issue, and that is how Ms. Sharp met Mr. Stylman, who ultimately became the one to convince her to jump into this important project.

One night Mr. Stylman called a meeting of the minds. There were about 25 people in the room from all walks of life who told their stories. Ms. Sharp told her story last, and through her eyes as a filmmaker, she described not only her own story, but the stories of those who were suffering alongside her, and the painful emotional wall so many of them faced when trying to discuss their injuries. Mr. Stylman approached her after the meeting to see if she would be interested in creating a film around the stories they heard, as well as the reactions to those stories.

Two months after the meeting in NYC, Ms. Sharp lost her second job for not being vaccinated. At the time, she participated in support groups with thousands of others in a similar position, many of whom were also met with skepticism when telling people in real life that they suffered vaccine injuries. Many of them too, got fired numerous times for refusing more vaccines.

Ms. Sharp reached out to Mr. Stylman to see if he was serious about creating a film and partnering with her for emotional support. He answered yes, and they got to work immediately. The film Anecdotals does an incredible job of telling people’s stories. The goal of this film isn’t to connect any dots or promote any theories, it’s simply to demonstrate to people what’s happening around them.

The initial launch of the video brought an immediate flood of reactions and it’s filling an emotional need for so many. People are reacting with a sense of gratitude and relief that their story is being told. One man in the comments section wrote out his medical and emotional saga post-vaccine, and ended his comment with:

“And I have never reported this adverse reaction”

Mr. Stylman noted that the film isn’t anti-vaccine in any way, it’s simply telling stories. The odd censorship surrounding the stories is what has been keeping these particular mRNA vaccines on the market.

Ms. Sharp created this movie to open dialogue. She stressed in such a clear and poignant manner how important it is for us to show compassion to those who think differently on this issue than we do, and to recognize that not everyone is ready to believe what we as a movement are trying to show them. Highlighting the raw human side of this entire saga is hopefully a topic that can connect the viewpoints of two emotionally charged groups of people.

Anecdotals Movie is dodging censorship as the film launches, so if you can’t find the video on your preferred video platform, please make sure to watch the version that will remain available on their site.

Spread the word out to your own circles, and share it with friends and family. Ms. Sharp wants people to know this should be something that they can feel comfortable sharing with loved ones who might be open to listening. She concluded the film by saying:

“We must be seen, believed, and heard”.

I had the honor of interviewing Ms. Sharp and Mr. Stylman:

Spread the love
This DailyClout article is the writer’s opinion.
One of our country’s most important freedoms is that of free speech.
Agree with this essay? Disagree? Join the debate by writing to DailyClout HERE.
Spread the love
Previous StoryOver 100 Iranian Protesters Face Execution
Next StoryOne of Five Stroke Sufferers post MRNA Vaccine DIED. Pfizer Documents!