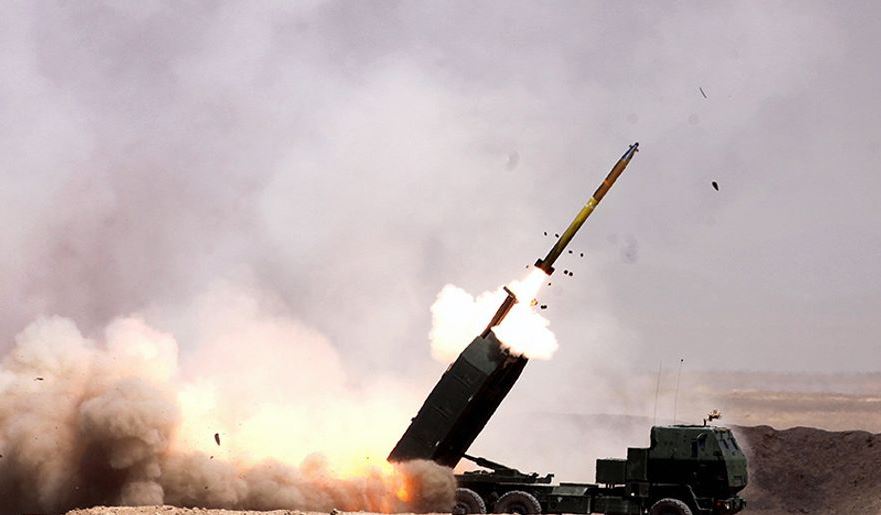 UKRAINE Breaks Even In Under A Hundred Days

Give War A Chance

Defense contractors must have been sitting around the past two years with a gun barrel in their mouths.

Everyone was raking in billions—Big Pharma, Big Tech, Big Box, Big Finance— off the Big Government Pandemic. While Big Defense was all alone on the sidelines.

Late last year a bunch of execs must have finally have marched into the Oval Office and confronted the Mad King:

C’mon, man! Give WAR a chance!

Because that’s when the malwording of UKRAINE began: 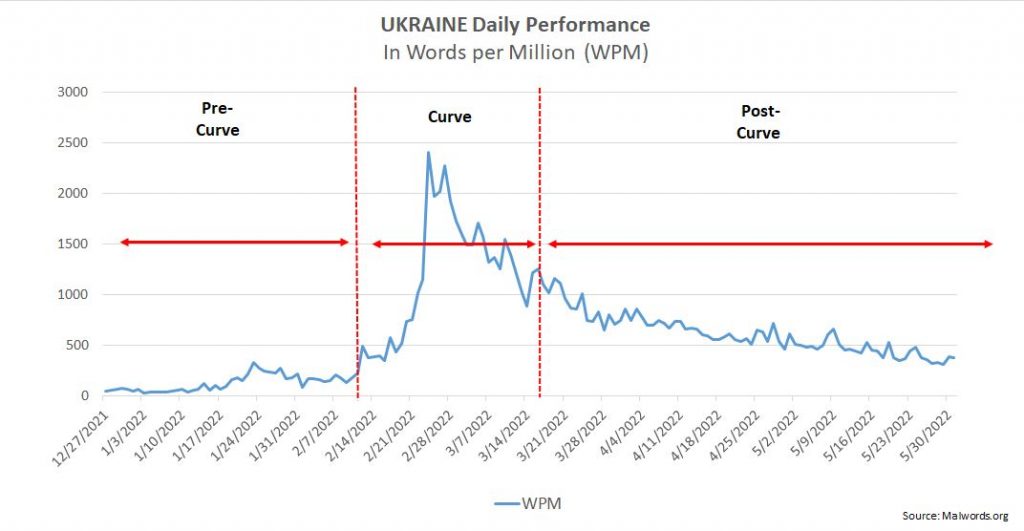 Making UKRAINE the most lucrative malword on record, pulling down nearly $64 billion in military, economic, and humanitarian aid in just seventy-five days.

And who better to foot the bill than American taxpayers?

$850 million a day from our pockets to keep UKRAINE free, Democratic, and spinning off even more kickbacks for their oligarchs and our globalist overlords.

This article dives into the predictive linguistics making UKRAINE the new mantra for getting rich quick. But first a little bit about malwords.

Malwords are keywords weaponized for information warfare. They function within public discourse as intellectual malware, verbal viruses designed to spread quickly for the purposes of a) silencing dissent through control of language, narrative, and speech, b) increasing public tolerance for government-sanctioned atrocity and c) emboldening officials to commit acts of atrocity.

Malword strength is measured by their frequency of appearance in the published body of language (corpus), and expressed in words per million (WPM) linguistic units (words, numbers, symbols, acronyms, etc).

Malword WPM’s typically follow a three-phase lifecycle: Pre-Curve test-markets the new term and puts up the store front; Curve is launch phase, characterized by a rapid, exponential liftoff and sudden plunge; Post-Curve is a long, asymptotic tail and is the period in which primary objective atrocities are implemented.

Looking at UKRAINE’s metrics, a few stats leap off the screen:

Atmospheric WPM’s. UKRAINE’s peak WPM of 2,404 on February 24— the day Russia launched its invasion of Ukraine— is second only to CORONAVIRUS, which peaked at 2,760 WPM on March 22, 2020—at the height of the Corona Panic when the whole country was breaking down.

Curve Phase shorter that Pre-Curve by ten days. Typically that ratio is not a fraction but a multiple, averaging 43x.

Statistical Lambda reached after Post-Curve Entry, which is the bump at which we see transition from linear crash slope to asymptotic glide path. Lambda is the statistical point at which 63.2% of units in a population are expired, consumed, spent, etc., and where a distribution curve begins to return decreasing values. Plotting UKRAINE as a Weibull area distribution, Lambda occurs on March 31, fifteen days after Post-Curve entry on March 16, a clear indicator of momentum behind this malword, and a signal to officials they need not worry about getting too far over their skis in committing atrocities. 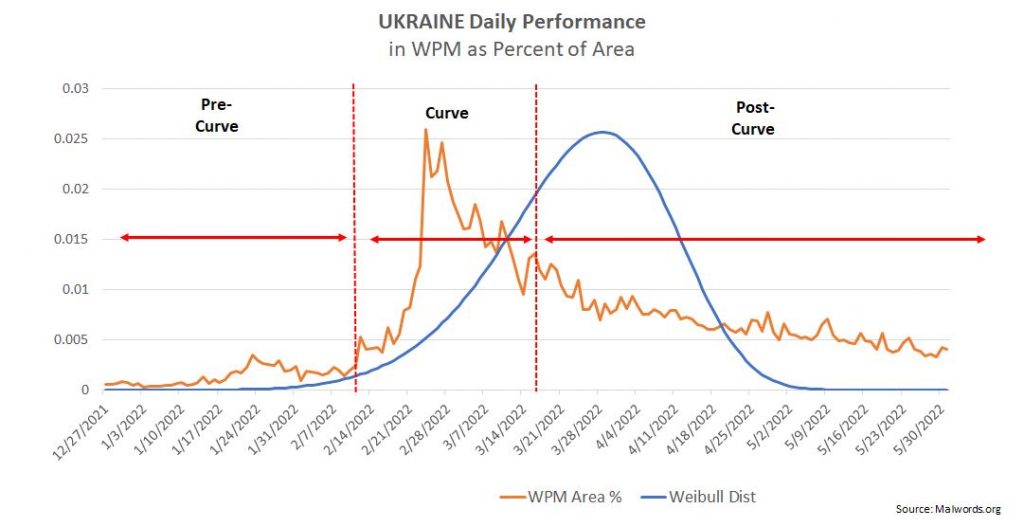 Finally, Post-Curve/Curve Area Ratio hits profitability (1.0x) in just sixty days. Profitability is when the Post-Curve Area (Output) equals the Curve Area (Input). PANDEMIC, by comparison, is nearly twice as profitable as UKRAINE, but took 270 days to turn that profit.

The results have been immediate: nearly $64B in no-strings-attached military, economic, and humanitarian aid, including a bailout of Ukraine pension funds.

Total bilateral aid commitments to Ukraine between February 24 and May 10, 2022, by country (in billion euros) Source: Statista

Coalition of the Unwilling

The numbers tell the story. The only members of this environmentally-friendly, carbon-neutral coalition leading the charge to destroy the planet are Mad King Joe, his Green New Deal Democrats and their Republican Quislings, who see in the fog of war yet another pretext for cancelling in-person voting in an election they cannot win unless they cheat… again.

This is the kind of oligarchy, favoritism, corruption, self-dealing, and endless wars our Founding Fathers fled.

Launching themselves to the other side of a planet— to get as far away from as possible. And when Mad King George and his red-coated zombies tried to pursue them here, they took up arms and shot them, in an insurrection that would later come to be called—-wait for it—The American Revolution.

This so-called “democracy” is no longer working for 99% of those whom it claims to represent. And in desperately clinging to power, its ruling apparatus is turning the world into a massive death camp—abortion, starvation, vaccination, obliteration.

“That whenever ANY Form of Government becomes DESTRUCTIVE of [Life, Liberty, and the Pursuit of Happiness], it is THE RIGHT OF THE PEOPLE to ALTER or to ABOLISH it, and to institute NEW GOVERNMENT, laying its foundation on such principles and organizing its powers in such form, as to them shall seem most likely to effect their SAFETY AND HAPPINESS.

—The unanimous Declaration of the thirteen united States of America, in Congress, July 4, 1776 (emphases added)

Resist. Reject. Revolt. Revolution. We seem to have no problem with it elsewhere when we find a government we don’t like. Like in Ukraine a long time ago in 2014.

And if you can’t rebel, at least exit.

Because Mad King Joe and his Oligarchy desperately need your money. And if you don’t hand it over, they’ll have to print it. And the more they have to print, the more sudden, more violent, and more complete their demise will be.

But before we even go there, instead of defunding the organs of this atrocity—IRS, DOJ, FBI, Education, State, Pentagon, etc.— as will be called for if the midterms are not cancelled or stolen…

Can we just put the US government on a subscription model?

It seems to be working fine for everyone else.

And we wouldn’t even have to fire a shot.

Harvey Oxenhorn is a cybersecurity consultant and author of the upcoming book, The Atrocity Algorithm, How The Media Became The Enemy of The People. He writes The Five Stages of Unf*ck, Red Pill Journey to January 2.0. , also on Substack. Follow him on Gettr, Gab, and MeWe @HarveyOxenhorn.

Spread the love
more
This DailyClout article is the writer’s opinion.
One of our country’s most important freedoms is that of free speech.
Agree with this essay? Disagree? Join the debate by writing to DailyClout HERE.
Spread the love
more
Previous StoryGas Price Pain – We Are Paying Almost $2 More Than A Year Ago
Next StoryEverything You’ve Missed on the Pfizer Documents So Far – Video