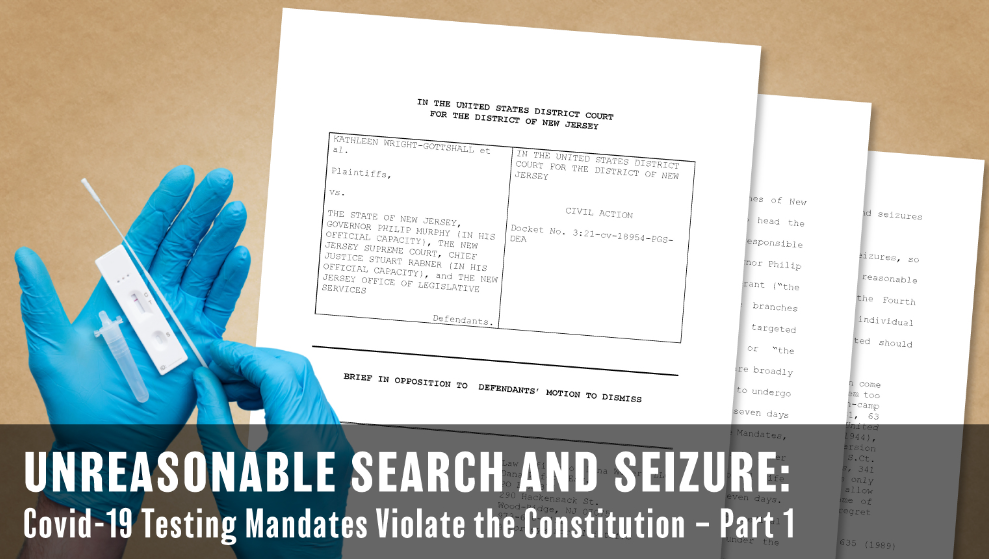 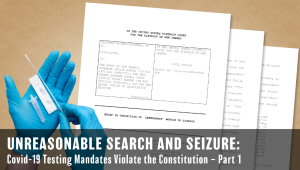 It has been a year since the University of Connecticut restricted me from enrolling and canceled $23,000 of merit scholarships over questioning the Covid-19 testing mandate. My university provided me with an “Innovative DNA Collection Kit, for research use only, not for use in diagnostic procedures”.

I was confused and upset back then and had not realized the great extent to which Covid-19 testing mandates intruded and violated our bodies and our rights protected under the Constitution. Which amendments and how were they violated? Continue reading to understand how fundamental principles of U.S. law were violated through an ongoing New Jersey lawsuit.

This case states that Covid-19 testing mandates are a violation of the First Amendment, the Fourth Amendment, the Fourteenth Amendment, and the Equal Protection Clause. One statement explained, “The fact that there is no legal or historical precedent demonstrates that the right to be free from such testing is deeply embedded in our nation’s history and tradition”.

The requirement of individuals to be searched and seized of their bodily fluids undoubtedly falls under the Fourth Amendment, which allows all individuals the right to be free from unreasonable mandated testing.

And as all Covid-19 tests are Emergency Use Only products, this case says that three separate rights under the Fourteenth Amendment —  the right to bodily integrity, the right to privacy, and the right to equal protection — were violated when the New Jersey government-mandated Covid-19 testing for unvaccinated government workers.

“I will not be used for medical experimentation.” – Kathleen Wright-Gotshall

Plaintiff Kathleen Wright-Gotshall said, “I was taught and do believe that my body is a temple of the Holy Spirit and I will and I can protect it. I will not be used for medical experimentation.”

The Fourth Amendment states, there must be a “probable cause” (a “special need”)  for the search and seizure of private information. This case cites that this “special need” doctrine is correlated with characteristics of a job and not the individual — demonstrated in jobs of “highly regulated industries”, such as law enforcement carrying weapons, employees involved with safety violations, or the search and seizure of drugs.

However, we do not see the same regulatory needs displayed in common careers such as the ones of the plaintiffs. Thus, the reasonability of Covid-19 testing is called into question.

“When we allow fundamental freedoms to be sacrificed in the name of real or perceived exigency, we invariably come to regret it.” – Skinner v. Ry. Lab. Executives’ Ass’n

The Government provided that the state of “emergency” yielded reason to demand and collect bodily fluids from the unvaccinated. Historically, suspending the Constitution in times of “emergency” is unwise.

In spite of history, the government’s motive remains to protect public health against the danger of Covid-19. But this motive fails to provide a reason why testing was not mandated during Fall and Winter of 2020, and yet only arising after the vaccine had been released.

In fact, within a week of the CDC and CDC’s MMWR data confirming there are “similarly high SARS-CoV-2 viral loads in vaccinated and unvaccinated people. High viral loads suggest an increased risk of transmission and raised concern that… vaccinated people infected with Delta can transmit the virus,” Chief Justice Rabner and Judge Glenn Grant announced that the vaccinated workers can “continue working without any new conditions on their employment” while the unvaccinated workers would need to undergo “weekly medical tests to prove they are not infected with covid”.

On July 31, 2021, a day after the CDC’s public statement, researchers Riemersma et al. published a study on MedRxiv stating, “We find no difference in viral loads when comparing unvaccinated individuals to those who have vaccine “breakthrough” infections. Furthermore, individuals with vaccine breakthrough infections frequently test positive with viral loads consistent with the ability to shed infectious viruses.” This study from UC Davis found similar results from the analysis of 869 samples.

Previously, courts have explained that it is “not the judiciary’s role to determine the most effective method to protect the public against disease. Instead, “[t]hat was for the legislative department to determine in the light of all the information it had or could obtain.” (Messina v. The Coll. of N.J., 2021)

In fact, on January 13, 2023, the New York State Supreme Court determined that as the Covid-19 vaccines do not stop transmission, mandates are “arbitrary and capricious” with no “sound basis in reason… taken without regard to the facts”. (Medical Professionals For Informed Consent v. Bassett, Hochul, New York State Department of Health, 2023)

This lack of preventative action poses a serious risk to the safety of all individuals, revealing the government’s jarring negligence of public health and discrimination.

Plaintiff Melani Borodziuk says, “I am subjected to differential treatment… I am required to stay home for a longer period of time than someone that has taken the shot even though it’s known that people who have taken the injections can still get and transmit Covid. I will be required to use my personal time for testing at my expense.”

Plaintiff Kimberly Koppenall, who is immune to Covid-19 through recovery, says similarly, “Being singled out, and the idea that I might still lose my job – again for something that I have the right to refuse, something that is supposed to be a private decision – is emotionally stressful.”

More than merely defying scientific results and failing to take appropriate action to protect all individuals, the government treated their unvaccinated workers like “lepers” and utterly disregarded their employees’ anguished cries of being exposed, mental distress, and physical injuries. More of the plaintiffs’ stories will be discussed in Part 2, including one worker who drove 80 miles during her vacation to obtain a second Covid-19 test. 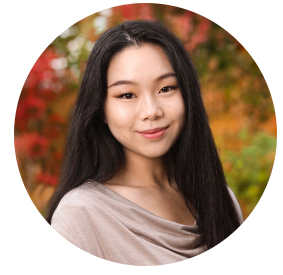 Phoebe Liou studied Biological Sciences on a Pre-Dental Track and was a Babbidge Scholar and Honors Scholar at the University of Connecticut.

Currently, she is a graphic designer and commercial photographer in the web development, food, and hospitality industries. She is the founder of Illuminare Photography.

Spread the love
This DailyClout article is the writer’s opinion.
One of our country’s most important freedoms is that of free speech.
Agree with this essay? Disagree? Join the debate by writing to DailyClout HERE.
Spread the love
Previous StoryDamaged Immune Systems, Pandemic of the Vaxed: “These Shots Have Clearly Made Things Worse”
Next StoryReport 52: Nine Months Post-COVID mRNA “Vaccine” Rollout, Substantial Birth Rate Drops in 13 European Countries, England/Wales, Australia, and Taiwan.