The Atlantic is Asking for “Pandemic Amnesty” and Forgiveness 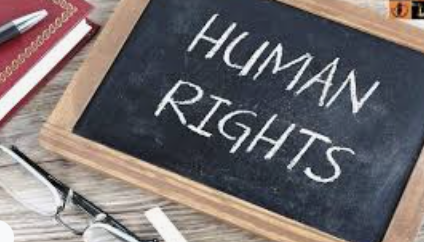 How interesting. The Atlantic is one of the most forward-looking and yet curated publications and they do not publish rubbish and random musings. And now they have a prominent author asking for “amnesty” and forgiveness.

Nobody is asking for amnesty for good deeds, right?

The article rambles and weaves to avoid mentioning anything specific as to who and what the amnesty would be FOR. What are the specific misdeeds that The Atlantic wants to be forgiven? Emily’s article is NOT clear.

In April 2020, with nothing else to do, my family took an enormous number of hikes. We all wore cloth masks that I had made myself. We had a family hand signal, which the person in the front would use if someone was approaching on the trail and we needed to put on our masks.  Once, when another child got too close to my then-4-year-old son on a bridge, he yelled at her “SOCIAL DISTANCING!”

These precautions were totally misguided. In April 2020, no one got the coronavirus from passing someone else hiking. Outdoor transmission was vanishingly rare. Our cloth masks made out of old bandanas wouldn’t have done anything, anyway. But the thing is: We didn’t know.

Another example: When the vaccines came out, we lacked definitive data on the relative efficacies of the Johnson & Johnson shot versus the mRNA options from Pfizer and Moderna. The mRNA vaccines have won out. But at the time, many people in public health were either neutral or expressed a J&J preference. This misstep wasn’t nefarious. It was the result of uncertainty.

The article gets weirder, seriously talking about suggestions to “inject bleach” as if anyone actually contemplated that:

Obviously some people intended to mislead and made wildly irresponsible claims. Remember when the public-health community had to spend a lot of time and resources urging Americans not to inject themselves with bleach? That was bad. Misinformation was, and remains, a huge problem. But most errors were made by people who were working in earnest for the good of society.

Prof. Oster is a very intelligent person and, no doubt understands that suggestions to inject bleach were fake and a part of “inoculations against misinformation”, a psyop campaign intended to make Covid skeptics look stupid.

That is a narcissistic non-apology.

The author surely did not publish this Atlantic article out of honest-to-goodness concern for the nebulous advocates of “bleach injections”. She wants some other acts — and some other players — to be forgiven instead. Prof. Oster is coy about who those people are. I am sure that she is asking for amnesty for our “Covid response leaders”.

She published her article, before the midterms, because she is concerned about disappointed people starting to ask questions. Questions, such as

Emily surely does not address such questions, but she is no doubt aware that they are being asked publicly and even brought up during the elections.

She is probably worried because she understands that these questions if asked and investigated, may lead to serious consequences. Hence, her call for amnesty.

Can We Have an “Amnesty” if we do not know the Crime?

Suggestions to provide an “amnesty” to wrongdoers without identifying them and their misdeeds are like putting the cart before the horse.

Amnesty for which wrongdoers? Amnesty for what? Prof. Oster is not clear on this and even I, someone interested in the Covid pandemic, am not yet certain as to the exact list of Covid wrongdoers. All I know is that they need to be investigated — and only then we can decide if amnesty is appropriate.

It Should Never Happen Again

We intuitively know that something went very wrong.

I hope that you, my reader, will agree that such things should never happen again. If so, then our “Covid response” needs to be fully and publicly investigated by impartial tribunals.

We need to make sure this never happens again to the subsequent generations. Somehow, we need to create a deterrent against future schemers. We cannot achieve that deterrence by giving everyone an “amnesty” without even knowing who did what.

Is it possible that everyone acted in our best interests and that the mistakes were unintentional? Are the people asking for amnesty confused well-wishers, or are they Covid Criminals who poisoned millions through malice, greed, and reckless disregard for safety? We’d need to know what happened, first, to have the answer!

Only after an investigation that uncovers what transpired, will we be able to judge whether an “amnesty” is appropriate and if so, for whom. Not before.

If such an investigation uncovers crimes, such as violation of national laws or crimes against humanity, then I hope that legally convened courts will be able to assess legally appropriate sanctions against individuals involved.

Should some of those people be amnestied? It is a legitimate question that needs to be addressed — but only after we know what happened. 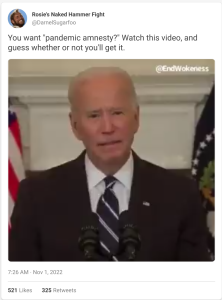 You want “pandemic amnesty?” Watch this video, and guess whether or not you’ll get it.
What do you think? Why this call for amnesty now, from The Atlantic, no less?
Spread the love

Spread the love
This DailyClout article is the writer’s opinion.
One of our country’s most important freedoms is that of free speech.
Agree with this essay? Disagree? Join the debate by writing to DailyClout HERE.
Spread the love
Previous StoryPoll: Voter Sentiment Spells Defeat for Democrats in Midterms
Next StoryPoll: Majority of Young Americans Say There is No Absolute Truth