Should Protesters Be Allowed To Burn US Flags? 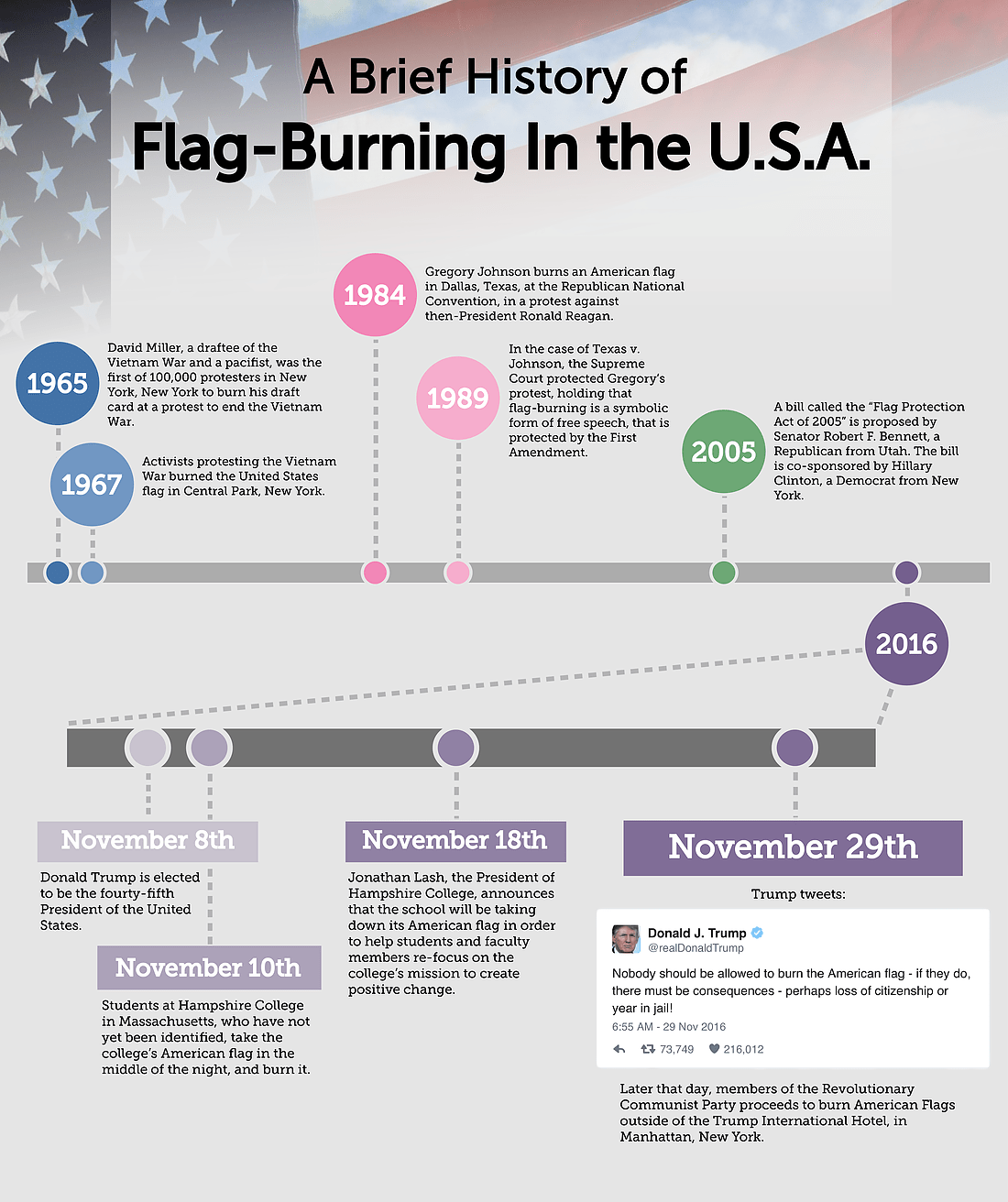 While many Americans cheered the victory of Donald J Trump in the US election, others were distressed that this candidate had become the new President of the United States. Some of those opponents expressed their sentiments in a controversial but time-honored form of protest — they burned the American flag. As New England Public Radio ra month ago, students from Hampshire College in Amherst Massachusetts expressed their distaste with the political system by taking down and burning an American burning an American flag on their campus. This event was just one example of many flag-burning incidents on US college campuses that followed the outcome of the 2016 U.S. Presidential election.

Just after this public display of outrage by a group of students, on November 29th, 2016,  Trump tweeted:

Trump’s tweet caused great upheaval among many critics who saw themselves as defenders of the First Amendment of the Constitution. On the same day of Trump’s tweet, a group of far-left protesters actually ignited American flags in front of the Trump International Hotel in Manhattan, New York, according to the Huffington Post. These protesters were a small group of people who said that they belonged to the Revolutionary Communist Party, This left-wing party is led by Bob Avakian, a political activist who spent the 1960s at the University of California, Berkeley — the site, of course, of much public protest at that time — according to the Revolutionary Communist Party’s official website. He and his group were harking back to a previous generation, in their button-pushing display.

For this kind of protest, and the reaction against it, aren’t new issues. Flag-burning became part of the arsenal of dissent in student protests against the Vietnam War and the draft in the 1960s and 1970s.

The issue came up again in 1984. In the case of Texas v. Johnson, Gregory Johnson had burned an American flag in Dallas, Texas, just outside of the building in which the Republican National Convention was taking place, during a public protest against the then-President, Ronald Reagan. Johnson had claimed that his action was in fact his exercise of his First Amendment right to freedom of speech, expressed symbolically. In 1989, the Supreme Court ruled that burning the American flag is indeed Constitutionally protected speech under the First Amendment. The United States Supreme Court website explains the historic ruling:

The majority of the Court, according to Justice William Brennan, agreed with Johnson and held that flag burning constitutes a form of “symbolic speech” that is protected by the First Amendment. The majority noted that freedom of speech protects actions that society may find very offensive, but society’s outrage alone is not justification for suppressing free speech.

These public displays of political dissatisfaction that involve flag-burning are unsettling for many Americans, regardless of their political beliefs and even if they are strong supporters of other first amendment rights. Others believe that the proof of a healthy first amendment is that it protects even offensive symbolic speech and expression, as the judges had ruled.

In fact, President-elect Donald J. Trump isn’t the only big name in politics who is once again addressing his issue – and who is publicly opposed to the burning of the United States’ flag. Hillary Clinton, when she was a New York State Senator, had actually co-sponsored a bill called the Flag Protection Act of 2005. The Flag Protection Act, many would say, defends our nation’s flag by insisting on its being treated with high regard. The bill reads:

…the flag of the United States is a unique symbol of national unity and represents the values of liberty, justice, and equality that make this Nation an example of freedom unmatched throughout the world… Any person who shall intentionally threaten or intimidate any person or group of persons by burning, or causing to be burned, a flag of the United States shall be fined not more than $100,000, imprisoned for not more than 1 year, or both. But many others feel that flag-burning, however offensive, must be accepted as part of our heritage of our First Amendment rights to free expression, and that we are fortunate in this country to have the right to voice discontent with our government even in ways others find objectionable. Critics of the “Flag Protection Act” also worry about the “slippery slope” of criminalizing  a protester’s “intent”, which some say would be hard to prove.

Despite the bill’s clear relevance to modern issues, it has not been touched since 2005, when it was merely read twice, referred to the Judiciary Committee and left to collect dust.

Is flag burning something that must be defended, however offensive, due to our Constitutional protections around freedom of speech? Or is it an offense to a precious American symbol that is so serious that you support a bill that would make it a crime? what do you think?

Share this article to raise awareness about a bill to encroach on first amendment expression by criminalizing flag burning — or to appropriately defend the dignity of the American flag, depending on your point of view — throughout your social media networks, and let’s have this conversation together. Danielle Terricciato is a pre-law student at Fordham University.