Pfizer-BioNTech “Equivalent” Half Truths or a “Lot” of Lies? 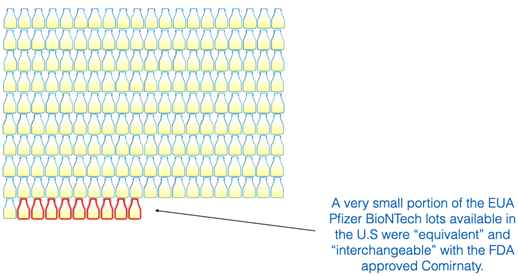 Pfizer-BioNTech FDA-Approved “Equivalent” Half Truths or a “Lot” of Lies?

This Report was written exclusively for DailyClout by the Members of the Pfizer Analysis team.

It should not be copied or republished without permission from DailyClout or a full credit and link toDailyClout.io

In the Fall of 2021, the Food and Drug Administration (FDA) approved Pfizer’s COVID-19 vaccine which led to extensive policy changes, imposed mandates, societal conflict, job loss, discrimination and much more.  The country was turned upside down.  Government health agencies whom we have depended on for medical expertise and truth failed us.   This failure resulted in unnecessary policy changes and mandates that caused job losses and worse. Whether intentional or otherwise, our trusted agencies left out a small but significant detail that would have stopped the mandates.

On August 23, 2021, the FDA announced the approval of Pfizer-BioNTech’s Biologics License Application (BLA) for Comirnaty, a branded mRNA COVID-19 vaccine.  The FDA reported that the Pfizer-BioNTech FDA-approved product, Comirnaty, and the Pfizer-BioNTech Emergency Use Authorization (EUA) product were equivalent and could be used interchangeably.  The public heard this ad nauseam from health officials in public briefings, news articles and even government committee hearings.

However, that was not the whole story.  A pertinent disclaimer was left out of the announcement as evidenced by a document Pfizer quietly posted on their website dated Aug 23, 2021, the same day as of the FDA approval announcement.   The subject line says it all.  “Certain Pfizer-BioNTech COVID-19 Vaccine Lots authorized for Emergency Use comply with the Biologics License Application (BLA).”   Screenshot below. 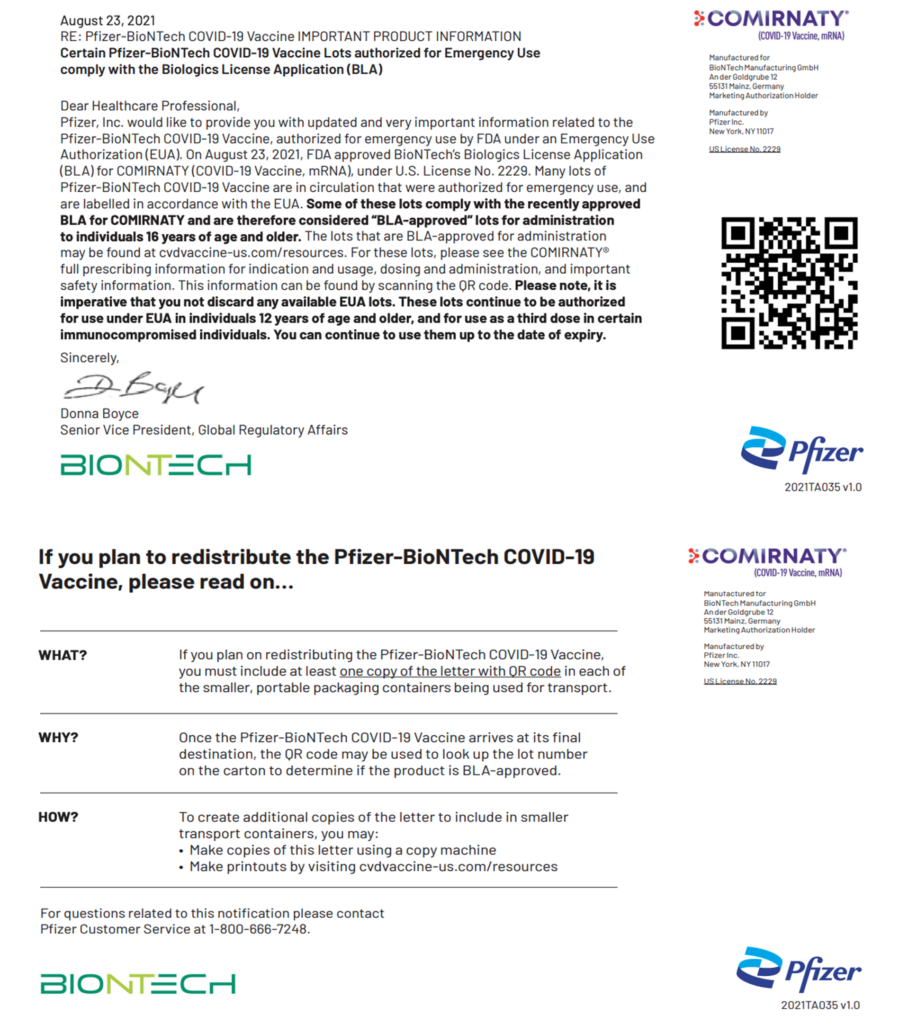 The letter states, “Many lots of Pfizer-BioNTech COVID-19 Vaccine are in circulation that were authorized for emergency use, and are labelled in accordance with the EUA. Some of these lots comply with the recently approved BLA for COMIRNATY and are therefore considered “BLA-approved” lots for administration to individuals 16 years of age and older.”  The corresponding lot numbers were not included in letter.  Rather, a website was provided to access the information, which was not easy to find.    The letter also stated that the QR code was intended to provide direct access to prescribing information, indication and usage, dosing and administration and other important safety information.  However, accessing the QR code produced the lot numbers instead.   It seems Pfizer may have made an error and reversed the link and QR code in their instructions.  Here are the lot numbers posted on Pfizer’s webpage: 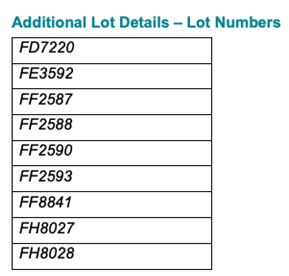 *I was told by the Pfizer rep on the phone that all of these lots were purple cap vials.

Only 9 lot numbers are “equivalent” to the FDA approved Comirnaty.

There are only 9.  These are the lot numbers that are “equivalent” and “interchangeable,” per the letter, but what makes them different than the other Pfizer-BioNTech EUA lots?  This author had multiple communications with Pfizer via email and/or phone on the following dates:  October 11, 2021; February 7, 2022; February 8, 2022; Apr 14, 2022; and May 13, 2022.  In a follow-up email after one of the calls, Pfizer sent an explanation of the difference.  See screenshot below of paragraph from their email.

Pay close attention to the verbiage here.  It states that the processes are the same.   “While the products are manufactured using the same process, they may have been manufactured at different sites or using raw materials from different approved suppliers.”  Therefore, according to Pfizer’s explanation, the variables that differentiate the “equivalent” version from others is where they are manufactured and the raw materials used.   In another email, they sent information seen in screenshot below.    This time it states the ingredients and process are the same; therefore, the facility would be the only variable that is different.

On page nine of the Pfizer document titled CBER CMC BLA Review Memo, STN 125742, COVID-19 mRNA Vaccine (nucleoside modified) that was submitted with their Comirnaty approval application, it states, “Note, the facilities proposed for use to manufacture COMIRNATY™ under the BLA are facilities that are used to manufacture the Pfizer-BioNTech COVID-19 Vaccine under Emergency Use Authorization (EUA), which was originally issued on December 11, 2020. However, not all facilities used to manufacture the Pfizer-BioNTech COVID-19 Vaccine under EUA are proposed for use under the BLA.”  Screen shot of cover page below.   This supports what Pfizer said over the phone and in follow-up emails as stated above.

Also of note in the same document, is the description of evaluating quality control measures at the manufacturing facilities, such as cross contamination prevention measures, maintenance of controlled environments, cleaning and sterilization, etc.   Based on this information, it seems logical that Pfizer would only submit for FDA approval with facilities that met the quality standards described in the Biologics License Application.  This begs the question,  were there quality issues with other facilities that were making the majority of the product circulating in the United States?

If there are quality differences, and only the “equivalent”  lots were produced in facilities that met quality standards, what was the chance of getting the FDA-approved “equivalent” product?

We can calculate that chance using a June 14, 2022, document leaked by a Centers for Disease Control and Prevention (CDC) staff member to the How Bad Is My Batch? website [https://howbadismybatch.com/].  The document showed a total of 190 Pfizer lots.  Although it would be more accurate to use the number of doses for the calculation, that information is not publicly available.   The graphic below helps to put this in perspective visually.

This indicates that potentially very few people got the “interchangeable” formula that is supposed to be “equivalent” to the FDA-approved version of the Pfizer vaccine.   If there were 190 lots available in the United States and only nine met the “equivalent” criteria, that would be a 4.7% chance of receiving the equivalent formulation.

There is another important thing to note on the second page of the letter where distribution is addressed.  Here is the screenshot again: 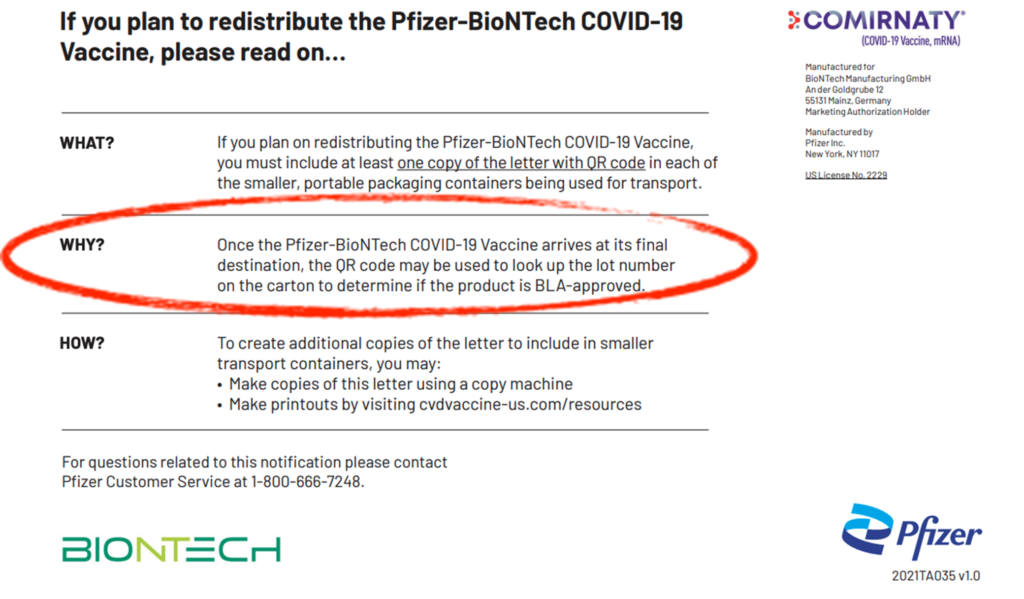 It states that if unused product is going to be shipped to another location, the shipment must include a copy of the letter with the QR code, referenced on the second page of this report, so that it can be used to determine if the lot number on the carton is the BLA-approved product.   To know and follow this requirement, one must know the letter exists.  This author has spoken to several physicians and pharmacists, and none have been aware of the letter.

Americans are being deceived.  Public disclosure has not given.  Only some of the available lots are “equivalent.”  The chances of getting the “equivalent” formulation are very slim.  Americans were led to believe that all the Pfizer-BioNTech vaccines were “equivalent” and “interchangeable” with the FDA-approved product, which is not at all the case.

This lack of transparency led to a tidal wave of policy changes, including vaccine mandates, thus destroying many Americans’ lives.  People lost their jobs.  Students were not allowed to attend colleges.  Soldiers were kicked out of the military.  Americans were prevented from entering businesses, sporting events, and much more.   If this information had been publicly available and widely disseminated, COVID-19 vaccine-related court cases may have played out much differently.  Additionally, military leaders may have made much different choices.  Unfortunately, we do not get a do-over.

The most important take away is that the American public was lied to.  That is truly all we need to know.  In 23 years of medicine, this is may be the most unethical thing this author has seen.  It will take decades for  healthcare to recover from the damage that has been done.

Dr. Kathy Willis is a board-certified Internal Medicine physician and lifetime member of the prestigious Alpha Omega Alpha medical honor society.  In her 23 years of experience, she served in the Louisiana State University Hospital system as hospital Medical Director and Associate Chief Medical Officer, as well as with Louisiana Healthcare Connections as one of their Medical Directors.  She has been consistently recognized for her achievements, until being fired for not taking the COVID-19 vaccine.