Opinion: “Yes, Trump Can Be Convicted by the Senate After January 20”

Opinion: “Yes, Trump Can Be Convicted by the Senate After January 20” 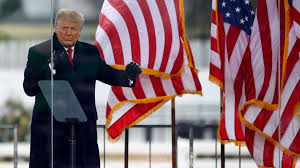 Now that the House of Representatives has impeached Donald Trump for Incitement of Insurrection, he will stand trial in the Senate. In light of Majority Leader Mitch McConnell’s refusal to hold the trial before January 20, the question arises whether Trump can be tried after he leaves office. The answer is yes. Expect Trump’s legal team to argue that he cannot.

“The Constitution does not require that an impeachment trial be held while a person is in office,” Berkeley Law School Dean Erwin Chemerinsky told Truthout. “Indeed, William Belknap, secretary of war to President [Ulysses S.] Grant, was impeached and tried after resigning from the position.”

The weight of legal authority supports Chemerinsky’s view. But J. Michael Luttig, a judge on the U.S. Court of Appeals for the 4th Circuit from 1991 to 2006, opined in The Washington Post, “Once Trump’s term ends on Jan. 20, Congress loses its constitutional authority to continue impeachment proceedings against him — even if the House has already approved articles of impeachment.” Luttig thinks “the Senate’s only power under the Constitution is to convict — or not — an incumbent president.”

Luttig — a darling of the conservatives — correctly advised Vice President Mike Pence that the Constitution did not give him the “unilateral authority to decide which electoral votes should be counted.” Luttig’s analysis of the Senate’s constitutional power to try impeachments, however, does not survive legal scrutiny.

Here are the two relevant provisions of the Constitution:

Article II, Section 4 says the “President, Vice President and all civil officers of the United States, shall be removed from office on impeachment for, and conviction of, treason, bribery, or other high crimes and misdemeanors.” But it doesn’t end there.

Article I, Section 3, which describes the Senate’s authority to conduct an impeachment trial, provides that “Judgment in cases of impeachment shall not extend further than to removal from office, and disqualification to hold and enjoy any office of honor, trust or profit under the United States” (emphasis added). The Senate has to make two discrete decisions: (1) whether to remove the president from office, and (2) whether to disqualify him from holding future office.

Although the Senate could not remove Trump since his presidency would already have ended, it could disqualify him from running for president in 2024, as Trump has threatened to do.

Article I, Section 3, gives the House of Representatives “the sole Power of Impeachment” and the Senate “the sole Power to try all Impeachments.” The impeachment process in the Constitution is purely a legislative function. There is no role for the judicial branch except that the Chief Justice of the United States presides over the Senate trial of a sitting president.

In all likelihood, the Supreme Court would decline to consider whether the Constitution permits the Senate to put a president on trial after he leaves office. In the 1993 case of Nixon v. United States, involving the impeachment of a federal judge, a unanimous Court refused to decide whether a Senate impeachment rule violated the Impeachment Clause.

The Nixon Court held that a case is “nonjusticiable” because it “involves a political question” if there is “a textually demonstrable constitutional commitment of the issue to a coordinate political department.” The Senate has the “sole” power of impeachment. Therefore, the Court reasoned, “the word ‘sole’ indicates that this authority is reposed in the Senate and nowhere else.” The courts have no jurisdiction to review the constitutionality of a Senate impeachment decision.

Thus, “the language and structure of Art. I, § 3, cl. 6, demonstrate a textual commitment of impeachment to the Senate,” the Court held. With a majority of textualists on the current Court, they would not likely depart from the Nixon holding, which Justice Clarence Thomas joined.

Moreover, “judicial review [of Senate impeachment decisions] would be inconsistent with the Framers’ insistence that our system be one of checks and balances,” the Court said. “The history and contemporary understanding of the impeachment provisions support our reading of the constitutional language. The parties do not offer evidence of a single word in the history of the Constitutional Convention or in contemporary commentary that even alludes to the possibility of judicial review in the context of the impeachment powers.”

Furthermore, there is precedent for late impeachments, as Chemerinsky noted. In 1876, Belknap resigned just before the House voted to impeach him for “baselessly prostituting his high office to his lust for private gain.” The Senate voted that Belknap was “amenable to trial by impeachment for acts done as Secretary of War, notwithstanding his resignation of said office before he was impeached.” Belknap was ultimately acquitted by the Senate.

There are also weighty public policy reasons to allow post-presidency impeachments. They both deter presidents from committing misconduct at the end of their terms and ensure they will not have a future opportunity to imperil the public by holding office.

“It certainly makes no sense for presidents who commit misconduct late in their terms, or perhaps not discovered until late in their terms, to be immune from the one process the Constitution allows for barring them from serving in any other federal office or from receiving any federal pensions,” University of North Carolina law professor Michael Gerhardt wrote at Just Security.

Trump must be held accountable for inciting insurrection by whipping up a racist and dangerous mob with lies about a stolen election. He must be prevented from endangering society by ever serving in public office again.

House Speaker Nancy Pelosi may transmit the article of impeachment to the Senate for trial as early as January 18. If the Senate votes to convict Trump, which requires the agreement of two-thirds of the senators, a simple majority can vote to disqualify him from holding future office.