Opinion: “Trump Can Be Indicted Under Federal, State and DC Laws for His Role in Jan. 6” 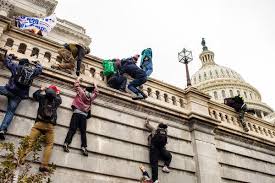 The legal evidence is damning: Donald Trump should be held criminally liable for “seditious conspiracy” and “inciting insurrection” for his role in stoking the events of January 6, when an angry mob of Trump loyalists, incited by the president himself, stormed the Capitol building to stop the congressional counting of votes for Joe Biden in the Electoral College.

The mob easily breached the Capitol building, rampaged through the halls of Congress — some waving Confederate flags — terrorizing senators and congress members. In stark contrast to the overwhelming and violent police force used against the largely peaceful Black Lives Matter protesters, there was little resistance offered by law enforcement against Trump’s mostly white minions as they entered the building where Congress was meeting and tore it apart. Trump’s violent backers did temporarily halt the count of votes for Biden. Five people died, and the mob of Trump supporters sprayed chemicals, threw lead pipes and injured more than 50 officers.

Hours later, Trump released a videotaped message praising them: “We love you. You’re very special.” He gave them permission to go home.

House Speaker Nancy Pelosi is right to be pursuing efforts to remove Trump from the presidency through the 25th Amendment. But that effort hit a roadblock today as House Republicans refused to give unanimous consent to a resolution urging Vice President Mike Pence to initiate the process. That means the House will vote on the resolution tomorrow, which is expected to pass easily.

Even if, as expected, Pence refuses to invoke the 25th Amendment procedure, Democrats can still press ahead with efforts to impeach and convict Trump, so as to bar him from holding future federal office.

In the weeks that follow, Trump may also be charged with the commission of several federal, and even state, crimes.

Trump Should Be Indicted Under Federal, D.C. and State Laws

After January 20, Trump will no longer be shielded by the Department of Justice policy that a sitting president cannot be indicted. There is overwhelming evidence that Trump committed several crimes.

The Constitution gives the president pardon power but says nothing about self-pardons. Trump has discussed pardoning himself. Since no president has ever done that, it is not clear whether a self-pardon would withstand a legal challenge if the Biden administration were to mount one. In any event, Trump does not have the power to pardon state crimes. Thus, wherever possible, federal cases should be filed jointly with prosecutions under D.C. law, and laws in states such as Virginia and Maryland, where many Trump loyalists stayed, and in their home states as well.

Trump violated 18 U.S.C. sec. 2383, which prohibits incitement of rebellion or insurrection. It provides for 10 years in prison for anyone who “incites … any rebellion or insurrection against the authority of the United States or the laws thereof, or gives aid or comfort thereto.” If convicted of this crime, Trump “shall be incapable of holding any office under the United States.”

The evidence cited in the pending article of impeachment also supports a criminal charge of inciting rebellion or insurrection against Trump.

Trump also committed seditious conspiracy in violation of 18 U.S.C. sec. 2384, by conspiring “to oppose by force the authority [of the government],” and “by force to prevent, hinder, or delay the execution of any law of the United States.” Seditious conspiracy carries a 20-year prison sentence.

Interrupting the counting of the electoral votes constitutes delaying the execution of U.S. law. During the January 6 siege, Rudy Giuliani left a long voicemail meant for Sen. Tommy Tuberville (R-Alabama), urging him to slow down the vote certification in the Electoral College. It reached Sen. Mike Lee (D-Utah) instead. In a 10-minute phone conversation with Tuberville, Trump implored him to make additional objections to the vote count.

Trump apparently resisted calling in the National Guard, which ultimately arrived once the Capitol breach was well underway. Trump loyalists quickly found the offices of specific legislators, including Nancy Pelosi. They went directly to Rep. James Clyburn’s private office, which few people knew about, leading Michael Moore to speculate that congress persons were in on the conspiracy.

Giuliani, Donald Trump Jr. and Rep. Mo Brooks (R-Alabama), together with Trump, conspired to exhort the large crowd to stop the counting of votes in the Electoral College, which is a U.S. law contained in the Constitution.

Over a period of several weeks, people close to Trump encouraged and advertised the “wild” January 6 event. Moreover, White House Counsel Pat Cipollone told White House officials not to talk to Trump or assist his coup attempt so they would not be prosecuted for treason.

Trump could also be charged with solicitation to commit a crime of violence, that is, murder, under 18 U.S.C. sec. 373. It is a crime to solicit, command, induce or endeavor to persuade another person to commit a felony involving the threat or use of physical force. If prosecutors can prove that whomever killed Capitol Police Officer Brian Sicknick was incited to violence at the rally where Trump exhorted his followers, he could be convicted of inciting murder.

Trump Should Also Be Charged in Georgia State Court

In a January 2 phone call, Trump bullied the Georgia secretary of state to “find” 11,780 votes to overturn Biden’s win in that state, and threatened Raffensperger if he didn’t comply.

Trump can be charged with criminal solicitation to commit election fraud in Georgia state court. Even though Trump’s solicitation was unsuccessful because Raffensperger refused to cheat and overturn Georgia’s election result, Trump can still be convicted of the crime, which is complete upon solicitation. He can also be charged with intentional interference with performance of election duties for attempting to interfere with Raffensperger’s legal duty to certify the election result in Georgia.

The evidence of Trump’s illegal conduct is legion.

Trump Mounted a Concerted Campaign to Steal the Election

For months before the presidential election, Trump spewed false claims of voter fraud to preemptively discredit a Biden victory. Both before and after Biden won 306 electoral votes, far more than the 270 required to win, Trump filed frivolous lawsuits challenging the results. Judge after judge dismissed them and the Supreme Court refused to overturn the election. Trump pressured election officials in several states to refuse to certify duly chosen Biden electors. And he sought to disenfranchise people of color in targeted counties and jurisdictions with primarily Black or Brown populations.

For weeks, White House staff and Trump’s close allies planned and promoted the “Stop the Steal” protest on January 6 at the Capitol. “Big protest in D.C. on January 6th,” Trump tweeted on December 19. “Be there, will be wild!”

Since Pence would be presiding over the joint session of Congress on January 6, Trump applied tremendous pressure on him to stop the certification of Biden’s electoral votes. When Pence told Trump that the Constitution gave him no such power, Trump was furious.

On January 6, Trump and his co-conspirators, Giuliani, Trump Jr. and Brooks, egged on the assembled crowd, urging them to march to the Capitol and stop the constitutionally mandated electoral vote count.

Giuliani told the throng, “Let’s have trial by combat.” Trump Jr. yelled, “Stand up and fight!” and threatened congressional Republicans who were not trying to overturn the election, declaring, “We’re coming for you.” Brooks said, “Today is the day American patriots start taking down names and kicking ass,” adding, “Our ancestors sacrificed their blood, their sweat, their tears, their fortunes and sometimes their lives to give us, their descendants, an America that is the greatest nation in world history.” He then asked the audience if they were “willing to do the same.”

When Trump addressed the crowd, he called the election outcome “this egregious assault on our democracy.” He said they would “stop the steal” and keep the Democrats from “fraudulently taking over our country.” Trump advised his supporters to “show strength” and “walk down to the Capitol,” adding, “you will never take back our country with weakness.” He said, “When you catch somebody in a fraud, you are allowed to go by very different rules.” They followed Trump’s exhortation and carried out the most destructive attack on Congress and the process of democratic elections in U.S. history.

Trump’s seditious conduct should result in his removal from office under the 25th Amendment and barring that, he should be impeached.

Trump Must Be Impeached and Removed From Office

The 25th Amendment provides for the vice president and a majority of the cabinet to declare that the president “is unable to discharge the powers and duties of his office.” Pence would assume the presidency. But if Trump contests it, he can resume his duties unless Pence and the cabinet make another such declaration within four days. Congress would then assemble within 48 hours and vote within 21 days. It requires agreement of two-thirds of both houses of Congress to permanently remove him from office.

Pence is unlikely to pursue the 25th Amendment. Thus, the House of Representatives should impeach and the Senate must convict Trump for his high Crimes and Misdemeanors.

Two hundred and ten members of the House of Representatives have co-sponsored an article of impeachment against Trump for Incitement of Insurrection.

Introduced by Democratic Representatives David Cicilline (Rhode Island), Ted Lieu (California) and Jamie Raskin (Maryland), the article alleges that Trump engaged “in high Crimes and Misdemeanors by willfully inciting violence against the Government of the United States.” Shortly before the Senate and House of Representatives met to count the Electoral College votes, Trump “reiterated false claims” to a nearby crowd of his supporters, telling them “we won this election, and we won it by a landslide.” The article says Trump “also willfully made statements that encouraged — and foreseeably resulted in — imminent lawless action at the Capitol.” The allegations continue,

The article states that Trump “gravely endangered the security of the United States” and its government institutions, “threatened the integrity of the democratic system, interfered with the peaceful transition of power, and imperiled a coordinate branch of government.” Trump thereby “betrayed his trust as President to the manifest injury of the people of the United States.” Finally, the article says, Trump “will remain a threat to national security, democracy, and the Constitution” if he continues in office.

This week, the House is expected to vote to impeach Trump. To remove him from office, however, the Senate must try and convict him by a two-thirds majority. Seventeen Republicans would have to join Democrats in order to accomplish this. Although it’s a long shot, increasing numbers of GOP senators are considering supporting impeachment. In any event, a Senate trial won’t occur before Joe Biden assumes the presidency on January 20. There is precedent to impeach and try a high government official after he leaves office.

One way or another, Trump should be removed from office and prevented from running for president again in 2024. He must be criminally charged to ensure accountability and prevent impunity for his egregious crimes to deter future presidential lawbreaking.