Letter from Australia: Are Water Tankers Available from US Forestry Service that Burning Australia Has Not Requested?

Letter from Australia: Are Water Tankers Available from US Forestry Service that Burning Australia Has Not Requested?

On December 27th, Australian environmentalist Jon Dee sent an email to the U.S. Forest Service. The former NSW Australian of the Year had a simple question: he wanted to know if the American MAFFS firefighting planes were available for use in the Australian bushfires.

In its reply, the U.S. Forest Service confirmed that the Australian Government had not asked to borrow the MAFFS firefighting planes. A spokesperson stated in writing that “The Australian government has not asked the United States for MAFFS.”

The spokesperson also confirmed to Dee that these MAFFS planes had previously been utilized overseas in Indonesia and Mexico. When asked by Jon Dee if these MAFFS planes could be used by Australia, the U.S. Forest Service replied that, “It’s possible the systems would be available”.

When Jon Dee asked if Australia should make a MAFFS plane request through the American Forest Service or the State Department, the spokesperson confirmed that “Australia would make that request to the USDA Forest Service.”

The U.S. Forest Service website confirms that “There are a total of 8 MAFFS ready for operational use.” The spokesperson confirmed in the email to Dee that “none of them are currently in use supporting wildland firefighting.”

As these MAFFS planes are not currently fighting fires and have previously been sent overseas to help other countries, Dee says there is no reason why they could not be sent to Australia to help with the bushfire effort. What is lacking is the request from Prime Minister Scott Morrison and the Australian Government.

In December,  Dee’s Blue Mountains home came under threat from a 500,000-hectare fire. Given the death and damage that has been wreaked by Australia’s bushfires, he wants to know why bigger aerial firefighting resources have not been made available. He also wonders how much destruction could have been avoided if Australia had the American MAFFS planes helping to fight the Australian bushfires.

Here is Dee’s message to DailyClout.io containing the key parts of the emails that he received from a Public Affairs Specialist for the U.S. Forest Service. The DailyClout has read these emails in their entirety.

On December 27th, 2019, a Public Affairs Specialist from the U.S. Forest Service confirmed the following to me via a written email:

The Australian government has not asked the United States for MAFFS.”

In a previous email, also sent on December 27th, the above spokesperson sent the following information.

I’ve responded to your original emailed questions below in red.  Let me know if you have questions.

Q1: Am I right in thinking that there are 8 MAFFS systems around America? Are any of them in use right now?

Yes, there are a total of 8 MAFFS.

While none of them are currently in use supporting wildland firefighting, they may be in use by the National Guard and/or U.S. Airforce conducting scheduled training and missions.

Q2: As you know, we have major bushfires in Australia at the moment. I noticed that you have lent these MAFFS systems overseas in the past.

Has the Australian Govt asked the American Forest Service or the State Department if Australia could borrow all their spare MAFFS systems for use in Australia?

MAFFS have been utilized in Indonesia and Mexico in the past. The Government of Australia nor the State Department has inquired about using MAFFS in Australia. Australia has contracts with a number of the same air tanker companies that the Forest Service does.

So as they need additional air tankers, they are contracting them directly from the companies that own them. For example, Coulson, 10 Tanker, Aero Air, Aero Flight, etc.

Q3:  Are the available MAFFS systems available to Australia if the Australian Govt makes that request to borrow them to deal with the current bushfire crisis? Would Australia have to make that request through the American Forest Service or the State Department?

It’s possible the systems would be available.

Australia would make that request to the USDA Forest Service.

Q4: What is the cost to overseas governments of borrowing the MAFFS system?

Unless the support is part of a USAID/OFDA effort, overseas governments pay actual flight time, flight and maintenance crew salaries, as well as costs for additional support elements that the USDA Forest Service provides.”

Dee shares this further explanation of the importance that MAFF planes could play in helping to stop the burning of Australia: 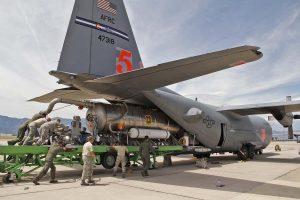 MAFFS stands for Modular Airborne Fire Fighting Systems. According to the U.S. Forest Service, “MAFFS are portable fire retardant delivery systems that can be inserted into military C-130 aircraft without major structural modifications to convert them into air tankers when needed.”

The California Department of Forestry & Fire Protection state that “MAFFS are requested only when all other fire service aircraft are committed to major, extended incidents. They are considered a 24-hour resource, meaning that when ordered, it will be at least 24 hours before they can be expected on duty. When ordered, MAFFS must be taken from their regular military duties and then fitted with fire fighting air tanker equipment.” 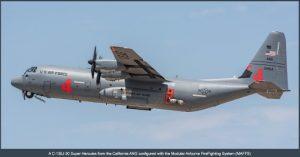 These MAFFS planes are a major firefighting resource.

The US Forest Service say that “MAFFS are important because they provide a “surge” capability that can be used to boost wildfire suppression efforts when contracted air tankers are fully committed or not readily available. They can discharge their entire load of up to 3,000 gallons of fire retardant in less than five seconds, covering an area one-quarter of a mile long by 100 feet wide, or make variable drops. Once the load is discharged, it can be refilled in less than 12 minutes.”

This additional aerial firefighting capability is something that Australia desperately needs. Firefighters and members of the public have been killed. Huge numbers of homes and businesses have been destroyed. Millions of hectares of our environment have been burnt and hundreds of millions of animals have burnt to death.

The MAFFS firefighting program is a very dependable aerial firefighting resource that has been in use for many decades.

Dee concludes: “Given that Australia has been struggling to fight our fires, why has the Australian Government not requested to use these 8 MAFFS planes from the U.S. Forest Service?

America’s reserve fleet of MAFFS-equipped Hercules planes is an excellent role model that Australia needs to copy. To do that, Australia needs to trial at least one of the American MAFFS firefighting planes in our current bushfires. If that trial was successful, it could install the MAFFS system into the Hercules planes that are based at RAAF Richmond near the Blue Mountains.

Doing that would only cost US$4-6 million per Hercules and it would give Australia its own reserve fleet of major firefighting aircraft.

The Americans have had this MAFFS system in place for many years and Australia should have it too. If we’d had this system in place before the current bushfires, we could have avoided a lot of the damage that has occurred.

There should be no more delays on this,” he warns. “Prime Minister Scott Morrison needs to ask President Trump and the U.S. Forest Service to borrow these MAFFS firefighting planes as soon as possible. Given the carnage that has taken place with these bushfires, Australia obviously needs these additional resources.”