Nowhere to be found: What really happened to Tiffany Dover? 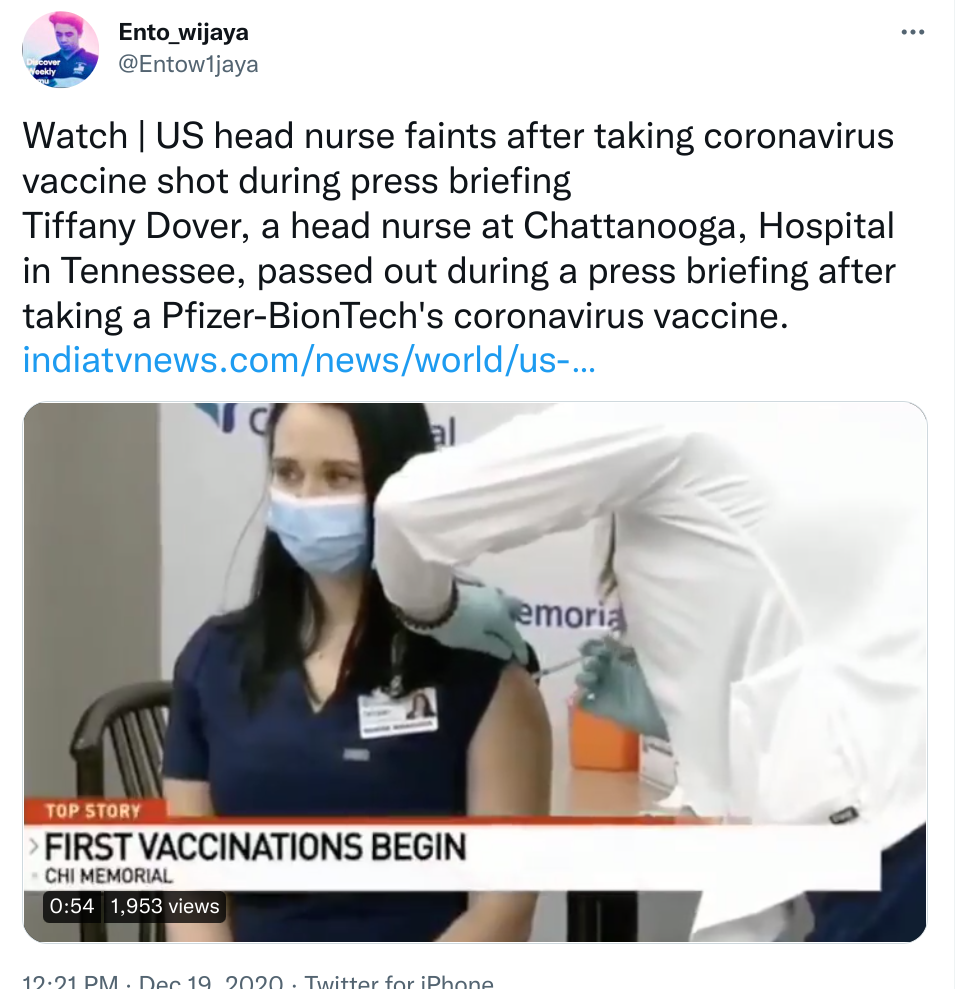 With media crews on hand recording the public event, Dover was presented to the public for a post-injection interview with the hopes to promote future uptake in a product that was then considered a possible cure to the coronavirus.

This is Part 1 of The Dossier’s investigation of Tiffany Dover’s sudden disappearance. Part 2 will become available exclusively to paid subscribers.

“It’s been a hard time,” Dover said about the last year. “We’ve persevered through it, but I think that this vaccination offers us hope.”

After she was brought back to consciousness, a clearly shaken Dover later told the media that she regularly has an over-reactive vagal response (half a dozen recent fainting spells, she said), and added that was why she collapsed onto the ground after taking the shot.

Sure, It was a perplexing situation, as one could certainly question the wisdom of CHI Memorial sending someone with a known fainting condition for a post-injection live press conference. Nonetheless, at the time, it could be written off to simple bureaucratic foolishness.

With tens of billions of dollars in revenue on the line, and a “safe and effective” stamp of approval from the U.S. government, this was not the launch of a widespread marketing campaign that Pfizer and the Public Health establishment had hoped for.

But that was just the beginning of the Tiffany Dover mystery.

The incident sparked endless speculation on social media, with many entertaining the possibility that Tiffany Dover was severely injured by the vaccine, or even killed on the spot. This fast became a nightmare PR situation for both the medical center and the vaccine rollout campaign.

On December 21, 2020, four days after she got the shot, CHI Memorial continued its damage control operation by featuring Tiffany in a short video, surrounded by her colleagues. “Nurse leadership supports Tiffany,” read one sign. “We got the shot,” says another.

For reasons unknown, that video has been wiped from social media, and the official accounts that posted it have since taken it down.

Part of the video is still available on The Sun website, but CHI memorial has deleted the original video, for reasons unexplained. As viewers can see in the video, it doesn’t take a medical expert to notice that Dover appears unwell.

And that was the last time Dover was documented in a public setting. As of this writing, that counts for over 650 days of silence.

For almost two years, Dover, a once prolific social media user on Instagram and elsewhere, has remained entirely off the grid, an unheard of phenomena for a millennial in 2022. The nurse manager has gone completely dark, her whereabouts remain unknown, and her family has remained tight-lipped about the whole episode. Unsurprisingly, this has fueled more and more speculation about the status of Dover’s health.

With a story of great national intrigue, the legacy media dove into the narrative wars, but not to find the truth. Instead, these outlets made it their mission to defend the vaccine, by repeatedly dismissing any and all intrigue into Dover’s disappearance.

For quite some time, “fact checkers” and legacy media outlets insisted that merely asking questions about Dover was akin to spreading disinformation about the vaccine. The Tiffany Dover mystery was bombarded with endless shutdown “fact checks,” with many in the corporate press taking pains to quash the story.  Moreover, they advanced the unsupported idea that Tiffany Dover was forced into hiding because of “conspiracy theorists” harassing her family for answers.

This line of reasoning never really made sense, as the easiest way to put an end to the speculation is for Dover to simply upload a “proof of life” video to the internet. So why hasn’t she done that? This is where we hunt for the motives behind her disappearance.

To this day, incredibly, no corporate press entity has been able deliver the goods on Tiffany Dover’s whereabouts. Tiffany Dover seems harder to find than a Soviet defector in America at the height of the Cold War.

Earlier this year, NBC dedicated immense resources to disproving claims advanced by what they deemed “anti-vaxxers.” The company dispatched Brandy Zadrozny, its chief censorship advocate (she refers to herself as a disinformation reporter), to prove to the world that Tiffany Dover was alive, well, and thriving.

Zadrozny and NBC later produced a 5 episode podcast series, titled “Tiffany Dover is Dead,” which documents the internet hall monitor’s adventures in rural Alabama (where Dover and her family resides), in which she is supposed to provide evidence of Dover being alive, well, and thriving.

Unfortunately for Zadrozny and NBC, she and her crew were unable to debunk the “conspiracy theorists.” They never found Ms Dover, and they took pains to dismiss the ledes they did stumble upon that could lead to fulfilling answers.

Nonetheless, Zadrozny left Alabama and Tennessee for New York City with a “mission accomplished” declaration. Akin to her legacy media “fact checker” colleagues, she relied on statements from Dover’s employer and her family to supposedly prove that Dover was alive and didn’t suffer any injuries, but she never actually spoke with or saw Dover, despite efforts to stake her out at her home and workplace. Zadrozny claimed to hear Tiffany Dover on the phone talking to a relative for a brief moment in time, but that was the most “evidence” that her team could conjure up.

The Dossier has acquired exclusive documents and followed up on some of the ignored “narrative violation” leads generated by the NBC crew, and has uncovered some additional information that offers hints about Dover’s current situation.

The Dossier has obtained evidence pointing to the likelihood that Tiffany Dover is alive, but her overall health status remains known only to her close family network. The evidence acquired by The Dossier lends weight to the strong possibility that Dover was silenced by both her employer and a more robust organization.

Throughout the NBC podcast series, several members of Dover’s family allude to a non disclosure agreement between she and her employer. They also allude to a major scandal, but an uninterested NBC team pretty much ignored any follow ups in those interviews.

Dover’s current employment status at CHI Memorial remains unknown, as they no longer comment on personnel matters. The Dossier has found that her nursing license in the state of Tennessee is currently set to expire at the end of next month. In Tennessee, nurses must renew their licenses every two years, which means her license was last renewed a month before she got the mRNA shot. We will have to wait until the end of November to figure out what is going on through this form of inquiry.

The most prevalent evidence demonstrating Dover being alive comes in the form of housing records and mortgage documents obtained by The Dossier, which maintain her notarized signature.

Given the ongoing hints about a settlement and a non disclosure agreement, this piece of evidence provides critical support for that notion.

9 months after she went quiet, Dover and her husband took out a $400,000 mortgage. At first, that doesn’t seem particularly unusual, but the amount needs to be understood in the context that it is 28 times more money than the annual per capita income in the neighborhood where they reside. However, it’s important to note that while their significant wealth in comparison to their neighbors is a departure from the norm, it is not firm evidence of a settlement.

Dover’s signature also appears in a May, 2021 document signing off on the deed to land they once owned.

Further evidence of Dover being alive, but potentially unwell, comes from her hacked Instagram account. In a now deleted social media channel, a leaker posted what he said were internal direct messages from the account over the past year. Among these purported messages includes Dover telling friends that the hospital is very strict about her not talking to the media. Moreover, on multiple occasions, she discusses being in an unwell state, but it’s unclear if she is referring to her physical or emotional wellbeing, or both. The Dossier is not posting those leaked conversations because they were not obtained ethically.

In terms of documentary evidence, the researchers often cite an Ancestry.com page that claims she died in December 2020, days after taking the shot. Another suspicious piece of information, they say, includes that Dustin Dover (her husband) has set his Facebook relationship status to “single.”

The Dossier investigated the Ancestry.com claim and found no evidence of a death certificate published on the website. Moreover, anyone can create a profile on Ancestry.com and claim that an individual is deceased. As for the Dustin Dover situation, his profile is now set to private, and The Dossier was unable to authentic that status, or if it changed.

There is a significant contingent of online sleuths who believe that Tiffany Dover is dead. Their most glaring piece of circumstantial evidence is the fact that she has completely disappeared from public view.

In 2022, it’s hard to blame the masses for wondering if someone who has disappeared from the public spotlight, for two long years, could be anything other than deceased. But perhaps, Dover has merely been pushed into silence by powerful forces that now control her destiny.

The original article can be found here

This is Part 1 of The Dossier’s investigation of Tiffany Dover’s sudden disappearance. Part 2 will become available only to paid subscribers. 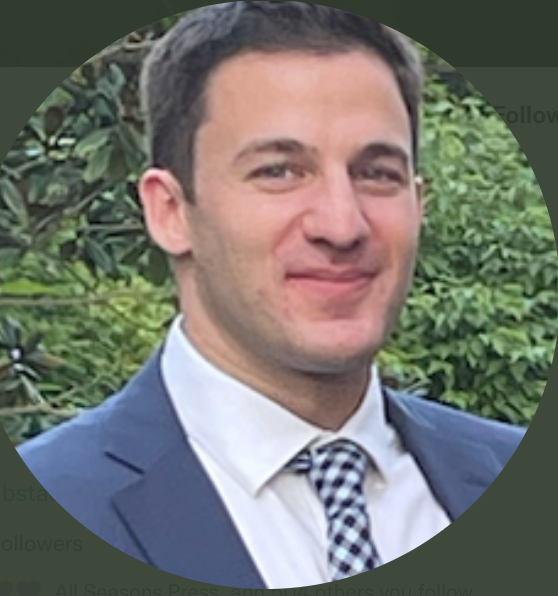 Spread the love
This DailyClout article is the writer’s opinion.
One of our country’s most important freedoms is that of free speech.
Agree with this essay? Disagree? Join the debate by writing to DailyClout HERE.
Spread the love
Previous StoryToday’s Legislative Call to Action: Preparation and Conduct for Primaries and Elections
Next Story50% increase in miscarriages; 50% decrease in fertility after COVID vax