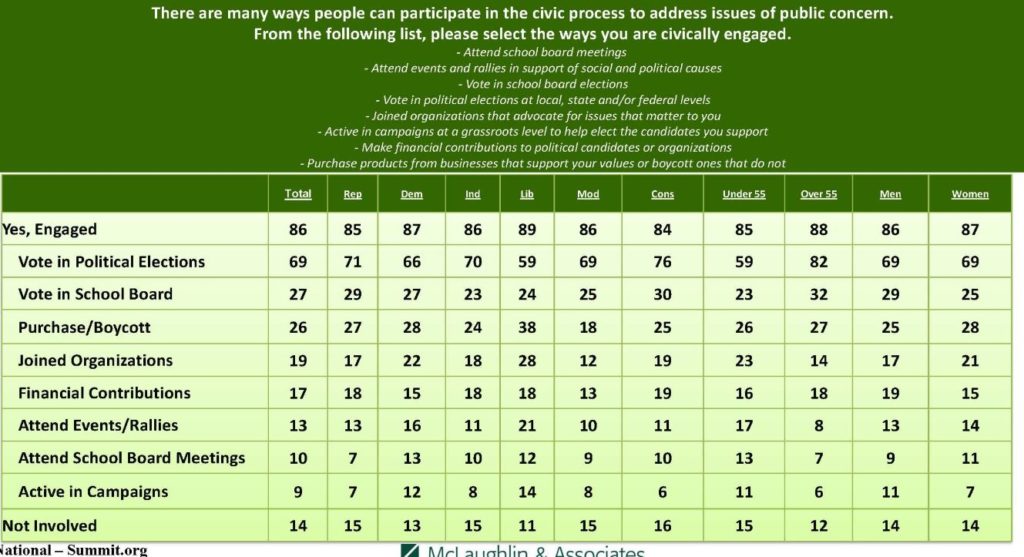 Vast Majority Believes They are Making a Difference, but Concerned Unity in America Has Become Impossible

(Manitou Springs, CO—August 10, 2022) Summit.org, in partnership with McLaughlin and Associates—one of America’s most respected polling survey firms—is releasing the results of a recent national survey. Results were from a survey of 1,000 likely general election voters nationwide and was conducted July 21st through July 25th.

“This stunning data reveals that—while almost all Americans say that unity in our nation is beyond repair—there is still a huge surge in civic involvement despite that pessimism. People believe their involvement is making a real difference. Americans are still fighting for the country and hoping they can realize a better future,” said Dr. Jeff Myers, President of Summit.org. “In the crosstabs, we find that conservatives are more civically active in voting, both in elections generally and in local issues such as school boards, while progressives are far ahead in actual activism. Progressives are more likely to attend rallies and events, get active in campaigns, and support organizations they believe in.”

All interviews were conducted online; survey invitations were distributed randomly within predetermined geographic units. These units were structured to correlate with actual voter turnout in the general election. This poll of 1,000 general election voters has an accuracy of +/- 3.1% at a 95% confidence interval.

The complete link to the data can be found here:

Spread the love
Spread the love
Previous StoryA Question and Answer Document on VAERS as a Pharmacovigilance Tool
Next StoryBillCam: The Most Effective Way to Search The Issues About Which You Care