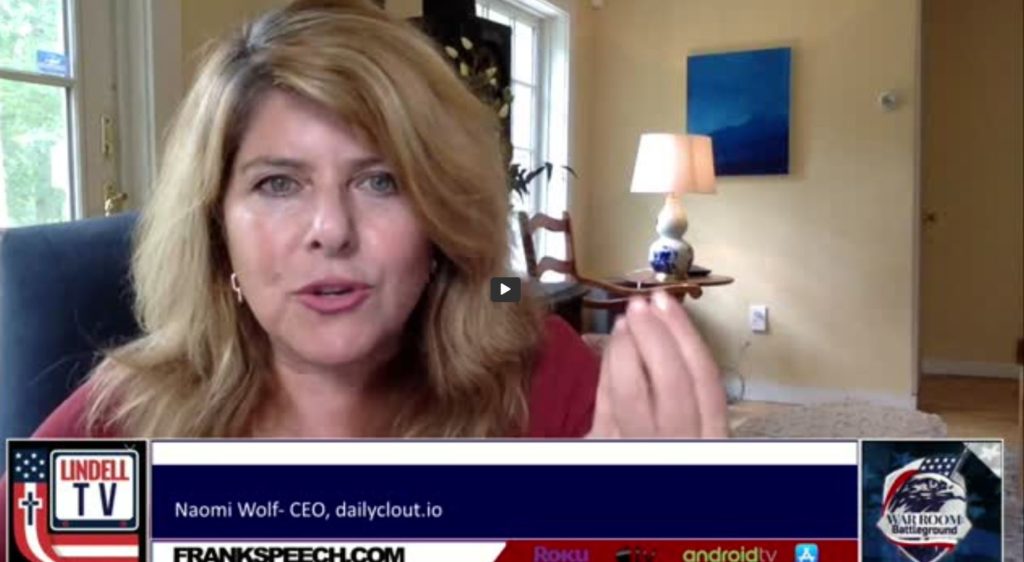 In this video, Dr. Naomi Wolf joins Steve Bannon to discuss more on FDA and Pfizer fraud, and to-date findings regarding vaccine dangers to fertility, specifically in regard to pregnancy and harms to both mothers and children. Why should the Covid vaccines be banned for pregnant women? Find out now.

I want to bring in another fighter Naomi Wolf.  So Naomi, in probably the most important midterm election since the civil war, you got all this news now with new boosters, you’re doing research. I think you guys have 35 reports. You’ve got the two companies suing, you got Moderna suing them. Walk us through where are we in all this and how they talk about new boosters, they’re suing each other. Uh, you’ve got you’ve guys are, come from these reports. You’ve got a new one on, on, I, I think, uh, men’s fertility, where do we stand with all this?

It’s it’s almost difficult to keep up with the new findings that back up, what you know is my belief that, um, these, these injections are intended or have the effect that no one’s stopping, who should be stopping of harming the American people. And more and more evidence is emerging that the harms are to reproduction. Um, and that the harms are very specifically 360 degrees to women’s, uh, ability to reproduce effectively or successfully. Um, and since I even last spoke with you, there’s been even more really disturbing evidence that, that I’d like to share with your audience if I may. And I do think it’s so important because, you know, as we’ve seen just in the last two weeks, legacy news outlets like associated press and the spectator are willing to, uh, hammer an immediately corrected math error immediately publicly corrected math error that one of our volunteers made, but they’re misdirecting or redirecting their audiences in a very dangerous way. Uh, that is really a disservice to their audiences away from what is emerging in multiple places from multiple databases, including elsewhere in the Pfizer documents as terrifying evidence of massive harms to female reproduction. So Cameron said, I could walk you through two new data points, uh, from our reports. Is that possible?

Thank you so much. So, uh, one of them is, uh, Denver should have a very scary image. Um, and I’d appreciate it if your producer would post it, if not you, there it is. Oh my God. So that is ladies and gentlemen, that is a pregnant woman’s placenta. Um, and I’m gonna read, uh, Dr. James Thorpe’s description. It’s his image from a presentation he gave. Um, this is an ultrasound image of a third trimester placenta in a pregnant woman who received the Pfizer vaccine eight weeks prior. This is a typical pattern that is commonly seen by him. About eight weeks post Pfizer vaccine, the white areas surrounding the placenta lobes, also known as codons represent calcifications from significant inflammation. Typically this finding may be associated with significant growth slowing of the fetus. That is the pre-born baby reduced amniotic fluid volume, abnormal, fetal, fetal surveillance testing.

(03:07)
And then he goes on to describe what fetal surveillance testing should be and should do. And then he says the large dark area in the placental lobe on the right may consistent with a blood clot. So again, ladies and gentlemen, I don’t know how many of you, you know, have been pregnant, had babies, your wives or partners have had babies, but that is not what a sonogram looks like. That’s not what a placenta that’s healthy and normal looks like. Those are terrifying, uh, unnatural irregular classifications that Dr. Thorpe explains are related to inflammation and over and over again, the, the science that our experts are finding and that other independent good researchers like Dr. Corey, Dr. Uh, Malone, Dr. McDonough are, are finding is that these, uh, materials in the vaccines cause inflammation. Um, so when I was reading the description, again, there’s less volume of amniotic fluid, which of course the baby needs in order to develop normally, and anecdotally what we’re hearing from nurses.

(04:14)
And I don’t, I am not ashamed. Uh, you know, as for 35 years covering women’s health, women’s sexual health, women’s reproductive health with two giant best sellers about obstetrics and gynecology and female sexual response. Um, you know, I actually know what I’m talking about when there’s a problem with women and women’s health, especially things that are hard to talk about, like giving birth or menstruating, or, you know, menopause. You first get the signal from women telling their stories among themselves. And you also first get the signal from nurses talking among themselves. So anecdotes are important. And what we’re hearing is that nurses are saying they are inducing labor early, uh, with vaccinated moms because the babies, um, cuz not safe, cuz the placenta are compromised. And remember over and over on this show, I would say the lipid nanoparticles are traversing. Every membrane in the human body, the placenta is a membrane.

(05:13)
The placenta is the most sacred, important membrane God gave us in order to reproduce our species. And how do you have a placenta that is not compromised if these industrial fats, these lipid nanoparticles coded with polyethylene glyco are designed to cross the placental barrier and remember again and again, and this is all over social media today. Um, spokespeople here in Britain, in Europe, we’re saying to pregnant women, go ahead and get the injection, get the mRNA vaccine. It cannot cross the placenta. It can’t hurt your developing baby. They were lying. They were either ignorant and, and, and inflicting their ignorance on defenseless mothers and their innocent witnesses. We

Well, it’s, it’s impossible to misread the data. And um, you know, next time I come on, I’ll walk you through Dr. Chandler’s latest report, which shows that even Pfizer knew in their own records, that women were sustaining 75% of the adverse events and of those 16% were what Pfizer called reproductive disorders, female reproductive disorders. So Pfizer was lying. The FDA saw every one of these pages, the FDA was lying. And so everyone up and down the chain of command in our HHS and in our health system was lying to pregnant. Women. ACOG must have been lying. The, you know, the, the licensing boards, the gynecologist boards. So, um, I, there’s no way to mistreat the data. The data are clear that women are being hurt. Okay. They’re right here on my phone. They’re right there on dairy cup. They’re any place?

Hang on. We’re we’re we’re gonna have you back on the 10 o’clock show. We’re working your schedule. Just last thing. I’ve only got 30 seconds. They just booted out 22 cadets or mid shipment at the coast guard academy. I think today I think a few of those women, how is this in 30 seconds? How is this still going on? If, if, if this is so is this is so cut and dry Naomi Wolf,

Well, you know my answer, but I’ll just keep saying it because everything I’ve told you all you know is true. Um, and if, if, if we ever make a mistake, we correct it immediately. But look at the massive 37 reports, they all are true. And what I’ve warned you about for months is true. It doesn’t make sense as medicine. It makes sense. As warfare, these female cadets are being targeted. Our military is being targeted. It is a, you know, these injections do things to, to the female 360 degree reproductive system that can’t

Done. Naomi, we’ll get it’s war. We’ll get to the bar. Give how did, how do people, how do people get to daily clout real quickly

Go to DailyClout.io and you’ll see all 37 reports there. You’ll see the latest by Dr. Chandler showing this damage.