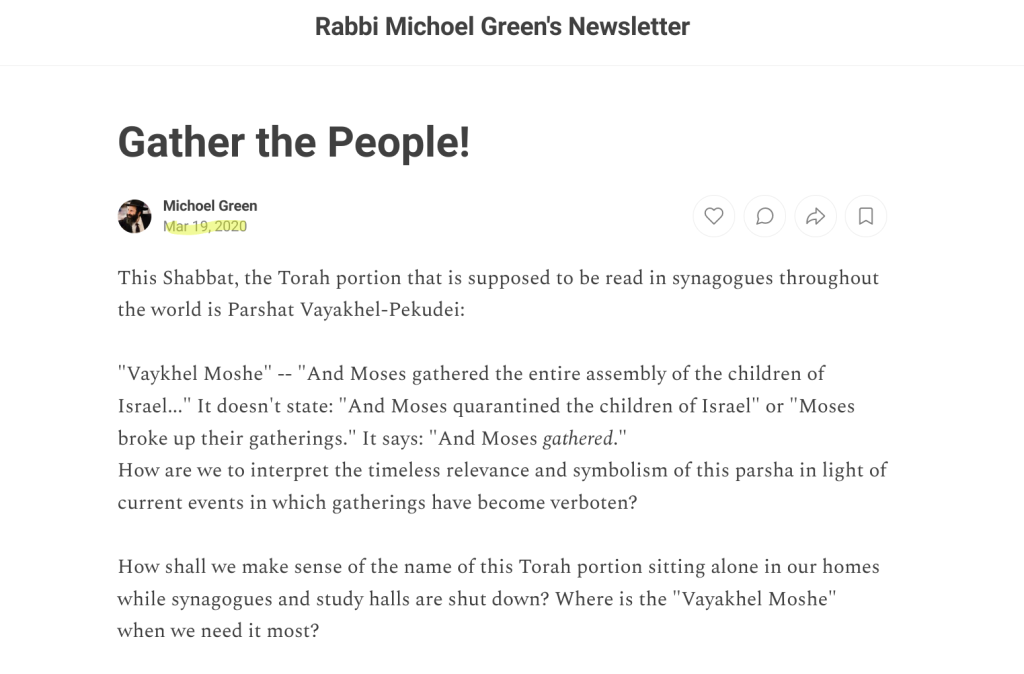 Rabbi Michoel Green is the Rabbi of Congregation Ahavat Achim in Westborough, Massachusetts. Rabbi Green is an independent thinker, and he made a name for himself early on in the Covid era as a Rabbi who constantly questioned the authorities, beginning with an immediate aversion to any forced closures of schools and synagogues. In his words from March 2020 “What Antiochus, Hadrian, Stalin, et al, couldn’t accomplish in thousands of years, the Rabbinate of Crown Heights accomplished in 15 seconds….” referring to their acquiesence to go along with the public mandates to close sacred institutions. 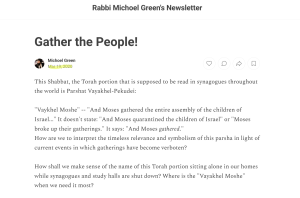 In January 2021, his outspoken views could no longer be tolerated by the Chabad organization that he held membership with at the time, and they officially cut off his chapter from their organization. He continued to lead his congregation and instituted a “no segregation” policy when it came to vaccines. He also opened up online services for those who were not comfortable attending synagogue in person and attracted people from all over the world who appreciated his services and views. A quick look at his website shows the kind of integrity and strength possessed by Rabbi Green.

Unfortunately, Rabbi Green is now under a SERIOUS attack from the State of Massachusetts and is being persecuted for his outspoken views on medical freedom. Right before Rosh Hashana, the Jewish New Year, the State’s Department of Children and Families barged into his family’s life and threatened to seize his children based on “calumnious charges that have no basis in reality” in the Rabbi’s words.

Rabbi Green posted a video yesterday, alongside his wife Mrs. Devora Green, to alert the public to the sudden persecution he found himself under, and to plead with the agency to leave his children alone.

I reached out to Linda Spears, Commissioner of the Massachusetts Department of Children and Family Services to inquire about the case against Rabbi Green and his family.

Numerous calls went unanswered, and an email sent to them remains unanswered as of this publication.

If you’d like to add your voice to the growing chorus of voices who are demanding an explanation for this seemingly blatant persecution, please reach out to Linda Spears: