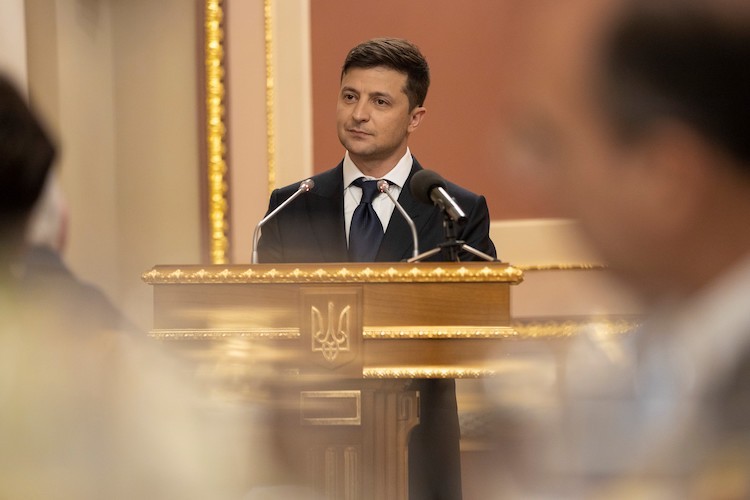 We like to call the President of the United States the leader of the free world.  Sadly, that is not true today.

The State of the Union speech was an utter failure.  Putin’s ultimate provocation, the disarming of the west’s energy policy and Europe’s dependence on Russian gas and oil, needs an immediate correction.

Putin’s ability to wage war is derived almost entirely from oil.  Along with the sanctions, which have been considerable, we can and must bury him with our oil industry, robbing him of the current elevated price of oil by producing more, and of sales to Europe by supplying them ourselves.  We hold all the cards if we have the courage to use them.  Releasing 30 million barrels of oil from Strategic Oil Reserve is not an energy policy.  That is two days’ worth of oil.

While President Biden leads from behind, while the “progressive” wing of his party navel-gazes into its self-absorbed reflection of narcissism, wokeness, critical race theory and mask mandates, out in the real world a forty-four-year-old Ukrainian modern-day Churchill is showing the world something we seem to have forgotten: “Live free or die, for death is not the worst of evils.”  Those words, written by General John Stark, the New Hampshire Revolutionary War hero, will live alongside the words of Vlodomyr Zalinsky: “I don’t need a ride, I need ammunition,” after the Biden administration offered to evacuate him from Ukraine.

Zalinsky and his fellow Ukrainians have shown the world that they will fight to the death rather than endure tyranny.  Western nations have become soft and have been heading toward the inevitable decline that comes from comfort and complacency and the from the willingness to trade personal freedom and responsibility for guarantees from the state.  That is the nature of creeping socialism.  It is no surprise then that such a willingness for personal compromise has resulted in Germany and other European countries bringing that Mephistophelean bargain to the national level, trading their independence and freedom for Russian oil.

And therein lies the difference between democracies and dictatorships.  The democratic leaders look inward and only as far as the next election, to how they can bribe their constituents with comforts and entitlements from the state so those politicians can stay in office.  But dictators look outward, far into the future, forever plotting the building of their empires.  They care little about the citizens in their societies and only to the extent that there is order and that the citizens’ dissatisfactions do not rise to the level of revolt.   Order is usually enforced at the point of a gun.  Democracies don’t wage war on other democracies.  Dictators always will.

After repeated incursions, assaults and cyber-attacks, Putin has suffered only the silliest and most insincere of responses from the west.  In the spring of 2021, the Colonial Pipeline was hacked and shut down by hackers from their safe haven in Russia.  Biden’s response?  Give Putin a list of other critical infrastructures that are “off limits” to cyber-attacks.  In 2014 Russia invaded and annexed Crimea.  The UN “disapproved.”  In 2008 the Russians invaded the Republic of Georgia, calling it a “peace enforcement operation.”  The sanctions imposed by the Obama administration at that time did exactly nothing, as we now know.  This history has only served to embolden Putin.  Afghanistan was the final cherry on top.

Today, after the months’ long build-up of troops on the Ukraine border, the Russians are engaged in another “peacekeeping” mission in Ukraine. The West refused to believe it.  Some cynically said that it was a distraction and China is the real enemy.  We have “no strategic interest in Ukraine.”

But many on the front lines of NATO, like the Lithuanians (Lithuania is the ‘Canary’ of World Order, Wall Street Journal, Dec. 30, 2021), the Poles (Will the West Heed Poland’s Warnings on Russian Aggression? Wall Street Journal, Feb 12, 2022) warned of the inevitable consequences if the West stood by and let Ukraine fall to Putin.  Ukraine, along with Taiwan, the other probable front in the contest of power and world order between east and west, are inseparable.  China was watching as the West faltered in their resolve to protect Ukraine, as many pundits argue “it’s just Ukriane.”

But it isn’t.  Ukraine is the first domino.  The Baltic states and Moldova would be next.  Putin has a history and a pattern that simply cannot be ignored.

The most important element of the world order is the alliances of mutual trust and defense.  Small nations must trust their alliances, or they will be pealed away by the bullies.  China and Russia, both, have assumed that NATO was weak, and the alliance could be degraded or even destroyed.  Germany and others had not paid their fair share of NATO defense expenditures and have “disarmed” their energy sectors.

Just a week ago, it seemed that Russia and China were right about the NATO alliance.    Putin cannily tried to drive a wedge right down the middle of NATO with Germany, which is so dependent on Russian energy, as the wedge.  If that had proven to be so, the domino that is Ukraine would only be the first of many, and Xi of China, watching from the sidelines, would realize that the Western alliance is a paper tiger.

It seemed that Putin’s gambit was working.  Then Vlodomyr Zalinsky, with the proverbial slap to the face of the hysterical character who has lost it on the precipice of disaster, convinced the Germans to impose SWIFT sanctions on Russia and to permanently rescind the Nord Stream pipeline.

China is watching, and their designs on Taiwan cannot have been advanced by the stiffening of NATO’s and the west’s resolve, along with the rest of the world.

Five hundred years ago Machiavelli advised in “The Prince” that “no aggression is ever delayed except to the advantage of the original aggressor.”  That lesson was learned in 1939 after the attempted appeasement of Hitler.

But President Biden seems not to be a student of history and we in the west seem destined to repeat the lessons of history.  Biden and NATO dithered for months as the intentions of Putin were clear, if not from the past, then from the satellite imagery.

The private sector oil companies of Exxon, BP and Shell, just today, have announced they will divest of their Russian oil operations.  Yet the Biden administration continues to lead from behind, allowing outside forces and actors to shape history.  It’s time we have a real leader.  At the moment, that appears to be a forty-four-year-old ex-comedian named Vlodomyr Zalinsky.
Spread the love
more
Spread the love
more
Previous StoryHolding Them Accountable! Grand Jury Petition Filed!
Next Story6 Canadian provinces lift mandates amidst protests
--