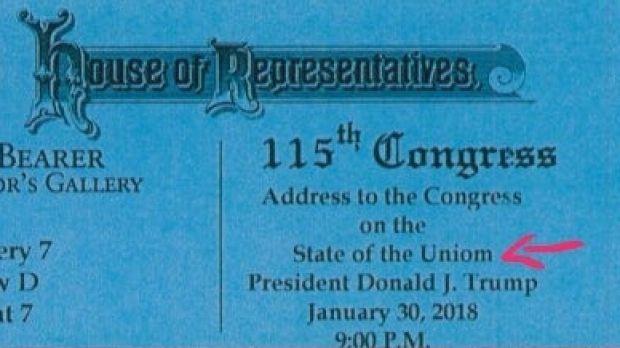 Tonight at 7 PM, President Trump will be giving his first State of the Union Address (SOTU). Let’s get into a little background on the SOTU and what this major speech is all about.

The State of the Union is vaguely Constitutionally mandated. The constitution requires the President to give Congress “information on the state of the union… from time to time”. But the President can’t just stop in to see legislators whenever he wants to. The Speaker of the House, currently Senator Paul Ryan (R-OH), must invite the President with a formal invitation. Despite the recent spelling error on the SOTU invitation, this is a very crucial event in the American political tradition.

Really though, how does this even happen? The SOTU is held in the capital, where a joint session of Congress, invitees, and press listen to the president tell the country what he’s done so far and what he plans to accomplish in the next year.

As a tradition, the President’s party stands and claps throughout the speech, while the opposing party sits quietly. For example, during President Obama’s last State of the Union, Senator Paul Ryan (R-OH) sat still and silent until the very end. President Trump’s speech will likely have Senator Ryan in a much happier mood.

Every speech concludes with the phrase, “the state of the union is strong.” But the end of the speech is just the beginning. Member’s of the opposing party respond with speeches of their own, doing their best to dissect and counter the President’s speech word for word.

This year’s official Democrat response will be given by a familiar name in American politics: a Kennedy.

Yes, you read that correctly.

Joe Kennedy III (D-MA) is a young rising star in the Democratic party. He also happens to be the grandson of the late New York Senator Robert Kennedy, Brother of President John F. Kennedy. The response to the State of the Union is often preserved for potential future leaders in Congress. In the past, Rep. Ricky Rubio (R-FL) and Sen. Paul Ryan (R-OH) were thrown into the national spotlight via response speeches.

I predict the 37-year-old Kennedy will invoke a certain amount of nostalgia for many Americans. And with the number of past-SOTU responders who’ve gone on to run for President, Kennedy’s speech will do more than just hint at a future role in leadership.

There will also be a spanish State of the Union response delivered by Virginia Delegate Elizabeth Guzman (D-VA). She is the first Latina elected to the Virginia House of Delegates.

It’s important to note that responses to the State of the Union, while great opportunities, are never easy. The grandeur of the capitol building filled with almost every leader in government often overpowers responses. Response speeches don’t have the added cushion of applauses; they are usually just a chair and a camera set up in a Representative’s office.

Memorable or not, the country will be watching both President Trump and Rep. Joe Kennedy (D-MA) as they frame the political narratives for the near future of our country.